When You Really Need a Translation App. Last week, I frequently found myself wishing that I was fluent in Arabic. 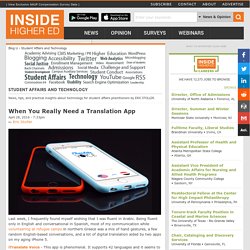 Being fluent only in English and conversational in Spanish, most of my communication while volunteering at refugee camps in northern Greece was a mix of hand gestures, a few random English-based conversations, and a lot of digital translation aided by two apps on my aging iPhone 5. iTranslate Voice - This app is phenomenal.

It supports 42 languages and it seems to actually work most of the time. I was able to speak simple sentences in English and the app would output both text and audio of what I said back in Arabic. Plus, it also lets you input and edit text for auto"magic" translation. iTranslate proved so useful for communication that those individuals who happened to have a working smartphone immediately downloaded it. Google Translate - Like most apps from Google, Translate is fairly useful. What's Due Adds What's Seen to Help You Help Students Complete Assignments.

Remind 2 Me - Send Future Reminders to Yourself. A couple of weeks ago I published a post about a service called Future Me that enables you to write letters to be sent to yourself at a future date. 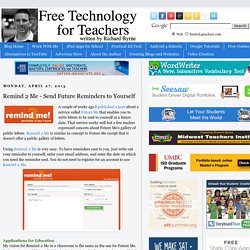 That service works well but a few readers expressed concern about Future Me's gallery of public letters. Remind 2 Me is similar in concept to Future Me except that it doesn't offer a public gallery of letters. Using Remind 2 Me is very easy. To have reminders sent to you, just write out your reminder to yourself, enter your email address, and enter the date on which you need the reminder sent.

Two Good Mathematics Glossaries for Students - One in English and Spanish. Like a lot of kids, when I was a middle school and high school student the vocabulary of math often tripped me up. 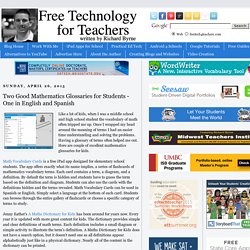 Once I wrapped my head around the meaning of terms I had an easier time understanding and solving the problems. Having a glossary of terms often helped me out. Here are couple of excellent mathematics glossaries for kids. Math Vocabulary Cards is a free iPad app designed for elementary school students. The app offers exactly what its name implies, a series of flashcards of mathematics vocabulary terms. Jenny Eather's A Maths Dictionary for Kids has been around for years now. Parts of this post originally appeared on one of my other blogs, iPadApps4Sschool.com. Animate Your Life. The cheat sheet to choosing effective education apps. Getting students active in the classroom is a tough task for any teacher. 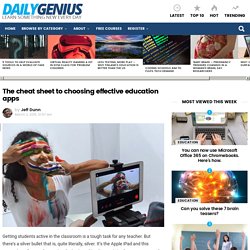 But there’s a silver bullet that is, quite literally, silver. It’s the Apple iPad and this expensive, silver, and engaging device is making its way into classrooms around the world. Since there’s such a push to bring apps into the classroom, it’s time to figure out which ones are right for you. I threw together this cheat sheet to choosing education apps that will hopefully help you quickly choose what works (and what doesn’t).

So what are some of the best education apps for active learning? This cheat sheet will help – but first let’s run through the questions you see in the visual. Questions To Ask When Testing Apps For The Classroom. Learn about easy, free and safe text messaging for teachers with Remind (formerly Remind101) 0321857895.pdf. SketchNotes. The 3 major problems edtech apps need to solve. A while ago, those who felt they were in-the-know, would stroke their metaphorical beards (this was pre-hipster) and pronounce that the digital future wouldn’t be found in a browser, it would be in apps. 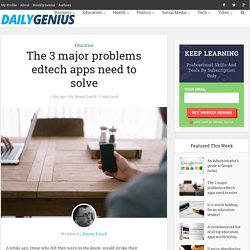 For many that’s true, the application is king in many different areas, but in education, the app world hasn’t quite mastered the two key elements that would make the difference between a mere digital pastime and something genuinely transformative. Those are the drivers for the kind of ubiquity you’d be looking for – but the breakthrough moment will come when an app tackles these three significant challenges: Mobile-friendly content.

There isn’t enough good quality content in education – still less content which works well on a smartphone (too many learning environments still include too much download/upload functionality and even one pdf is too many). Quality content that’s easy to navigate will be key. Inbox by Gmail - the inbox that works for you. Slack: Be less busy. 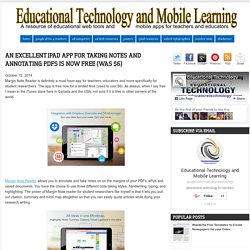 The app is free now for a limited time (used to cost $6). As always, when I say free I mean in the iTunes store here in Canada and the USA, not sure if it is free in other corners of the world. Margin Note Reader allows you to annotate and take notes on on the margins of your PDFs, ePub and saved documents. You have the choice to use three different note taking styles: handwriting, typing, and highlighting. The power of Margin Note reader for student researchers like myself is that it lets you pull out citation, summary and mind map altogether so that you can easily quote articles while doing your research writing. Some of the features that I really love about Margin Note Reader include: seamless syncing with your accounts on Dropbox and Evernote.

Building and Sustaining an App Smashing Culture. Allow Students to Create Their Own Apps With AppFurnace. AppFurnace is a new online tool which enables pupils to design, build and edit their own mobile device apps then transfer them for use on a smartphone or tablet device. 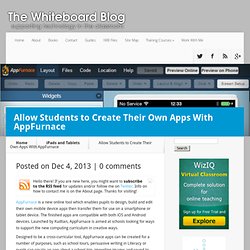 The finished apps are compatible with both iOS and Android devices. Launched by Kudlian, AppFurnace is aimed at schools looking for ways to support the new computing curriculum in creative ways. Designed to be a cross-curricular tool, AppFurnace apps can be created for a number of purposes, such as school tours, persuasive writing in Literacy or pupils can create an app about a school trip, importing images and sound to make it more interactive.

AppFurnace will help pupils develop their basic computing skills, but for more able or older students, they will be able to delve deeper and write computer code using Javascript to enhance the functionality of their app. There’s a detailed guide of the widgets and other types of code available within the software with examples to study.