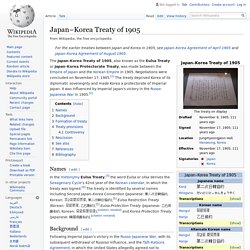 Negotiations were concluded on November 17, 1905.[1] The treaty deprived Korea of its diplomatic sovereignty and made Korea a protectorate of Japan. It was influenced by Japan's victory in the Russo-Japanese War in 1905.[2] Names[edit] In the metonymy "Ulsa Treaty,"[3] the word Eulsa or Ulsa derives the Sexagenary Cycle's 42nd year of the Korean calendar, in which the treaty was signed.[4] The treaty is identified by several names including Second Japan-Korea Convention (Japanese: 第二次日韓協約, Korean: 제2차한일협약, 第二次韓日協約),[5] Eulsa Restriction Treaty (Korean: 을사늑약, 乙巳勒約),[5] Eulsa Protection Treaty (Japanese: 乙巳保護条約, Korean: 을사보호조약),[citation needed] and Korea Protection Treaty (Japanese: 韓国保護条約). 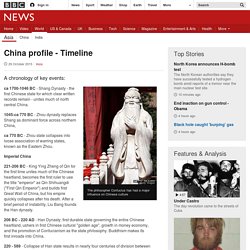 Imperial China. Germany–Japan relations. Re-constructed in the 1990s, the Japanese embassy in Berlin's Hiroshima Street was originally built from 1938 to 1942, and thus is a symbol for German–Japanese relations since that time. 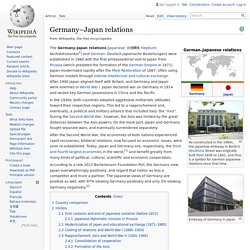 Embassy of Germany in Japan The Germany–Japan relations (Japanese: 日独関係, Hepburn: Nichidokukankei?) And German: Deutsch-japanische Beziehungen) were established in 1860 with the first ambassadorial visit to Japan from Prussia (which predated the formation of the German Empire in 1871). Japan modernized rapidly after the Meiji Restoration of 1867, often using German models through intense intellectual and cultural exchange. After 1900 Japan aligned itself with Britain, and Germany and Japan were enemies in World War I. In the 1930s, both countries adopted aggressive militaristic attitudes toward their respective regions. The Nan-yô Gunto Special Prefecture Japan Alternate History. 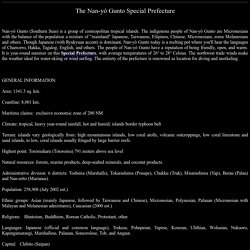 The indigenous people of Nan-yô Gunto are Micronesians with the balance of the population a mixture of "mainland" Japanese, Taiwanese, Filipinos, Chinese, Micronesians, some Melanesians and others. Though Japanese (with Ryukyuan accent) is dominant, Nan-yô Gunto today is a melting pot where you'll hear the languages of Chamorro, Hakka, Tagalog, English, and others. The people of Nan-yô Gunto have a reputation of being friendly, open, and warm. It is year-round summer on this Special Prefecture, with average temperatures of 26° to 28° Celsius. The northwest trade winds make the weather ideal for water-skiing or wind surfing. Area: 1341.3 sq. km. Coastline: 8,001 km. Pacific Theatre. Introduction to the War in the Pacific After Pearl Harbor the Japanese quickly gained control over a huge area of the Pacific, from the Phillipines to Burma to the Aleutians to the Solomons. 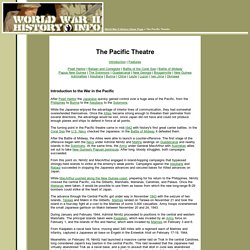 While the Japanese enjoyed the advantage of interior lines of communication, they had somewhat overextended themselves. Once the Allies became strong enough to threaten their perimeter from several directions, the advantage would be lost, since Japan did not have and could not produce enough planes and ships to defend in force at all points. Puppet state. A puppet state is a metaphor of a state that is supposedly independent but is in fact dependent upon an outside power,[1] it is nominally sovereign but effectively controlled by a foreign or otherwise alien power, for reasons such as financial interests, in fact anything but the common good.[2] A puppet state preserves the external paraphernalia of independence like a name, flag, anthem, constitution, law codes and motto but in reality is an organ of another state which created or sponsored the government.[3] Puppet states are not recognised as legitimate under international law.[4] 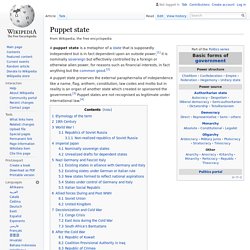 Countries of the Asia-Pacific Region. 1900 to 1950: Japan. Primary Source w/DBQs • The Atomic Bomb [Asia for Educators] Background reading discussing some of the events that preceded the U.S. dropping of the atomic bomb and presenting some of the questions left about the necessity and results of the bombing. 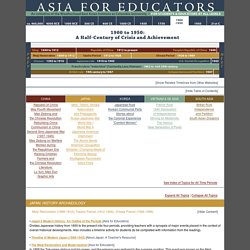 With three primary source documents with document-based questions [Report of the Interim Committee on the Military Use of the Atomic Bomb (May 1945) [PDF]; Report of the Franck Committee on the Social and Political Implications of a Demonstration of the Atomic Bomb (For a Non-Combat Demonstration) (June 1945) [PDF]; The Potsdam Declaration (July 26, 1945) [PDF]], plus activities for students. Primary Source w/DBQs • "The Decision to Use the Atomic Bomb," by Henry Lewis Stimson (February 1947) [PDF] [Asia for Educators] The Russo Japanese War. The Russo-Japanese War was a disaster for Russia in many senses – not just military. 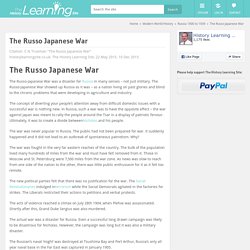 The Russo-Japanese War showed up Russia as it was – as a nation living on past glories and blind to the chronic problems that were developing in agriculture and industry. The concept of diverting your people’s attention away from difficult domestic issues with a successful war is nothing new. In Russia, such a war was to have the opposite effect – the war against Japan was meant to rally the people around the Tsar in a display of patriotic fervour.

Ultimately, it was to create a divide betweenNicholas and his people. First Sino-Japanese War (1894-1895) The First Sino-Japanese War (1894-1895) was Japan's first overseas war after she came out of isolation in the 1860s, and saw the rapidly modernised Japanese armed forces inflict an embarrassing defeat on less successfully modernised Chinese forces. 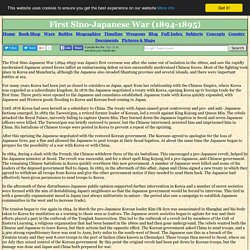 Most of the fighting took place in Korea and Manchuria, although the Japanese also invaded Shantung province and several islands, and there were important battles at sea. For many years Korea had been just as closed to outsiders as Japan, apart from her relationship with the Chinese Empire, where Korea was regarded as a subordinate kingdom. Are China, Japan and South Korea fanning the flames of war? But it backfired badly. 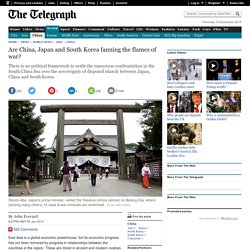 China was furious, seeing the islands’ acquisition by the government as a provocation. On November 23 2013 China set up an Air Defence Identification Zone (ADIZ) that included the islands, which required all aircraft entering the zone to enter a flight plan and to submit radio information – a clear assertion of sovereignty over the islands. To make matters worse, the ADIZ also included a rock claimed by South Korea. Japan and its US ally were deeply concerned, and reacted strongly. Are China, Japan and South Korea fanning the flames of war? Pearl Harbor. Shortly before 8am on Sunday 7 December 1941, the first of two waves of Japanese aircraft launched a devastating attack on the US Pacific Fleet, moored at Pearl Harbor in Hawaii.

The raid, which came with no warning and no declaration of war, destroyed four battleships and damaged four more in just two hours. 20th CENTURY: Korea as a Colony of Japan, 1910-1945. Japanese Colonial Rule (1910-1945) Japanese colonial rule (1910-1945) was a deeply ambivalent experience for Koreans. On the one hand, Japanese colonialism was often quite harsh. For the first ten years Japan ruled directly through the military, and any Korean dissent was ruthlessly crushed. After a nationwide protest against Japanese colonialism that began on March 1, 1919, Japanese rule relaxed somewhat, allowing a limited degree of freedom of expression for Koreans. Ask a Korean!: Korea vs Japan, the Military Showdown. Dear Korean, I was arguing with my friend about who had more military strength, Korea or Japan. My friend argued that Japan had a large navy and strong air force and volunteers for their ground forces. I know that Korea must have a larger land force than Japan since it drafts people, but are they trained well?

How are they equipped? Also, what are some notable ships or airplanes that are in Korea's navy and air force? John. ​S. Koreans say Japan worse threat than China as attitudes ‘worsen sharply’ Fifty-two percent of Japanese people dislike South Korea, while 78 percent of Koreans feel the same way about Japan, with 4 in 10 Koreans believing the countries will go to war in the next few years, according to an authoritative survey. In its third such annual study, Tokyo’s Genron NPO, a think tank, and Seoul’s East Asia Institute, each interviewed about 1,000 people in their respective countries, ahead of a landmark meeting between the South Korean and Japanese defense ministers.

READ MORE: Japan's cabinet approves legislation expanding military powers Koreans have been particularly alarmed by Japan, which has recently upped its defense budget, and whose current Prime Minister Shinzo Abe has espoused a rhetoric widely dubbed “new nationalism.” Three Hypotheses on Korea’s Intense Resentment of Japan. Another perspective on the troubled relations of the East Asian neighbors. Japan-Korea tension has reached a peak in the last year. South Korea’s president, Park Geun-Hye, refuses to meet with Japanese Prime Minister Shinzo Abe, even after a year in office.

Park has met with Premier Xi Jinping of China, but not the Japanese leadership – even though Korea and Japan are both U.S. allies, and despite China’s controversial expansion of its air defense identification zone at both Korea and Japan’s expense. When U.S. Japan police arrest Korean suspect in Yasukuni shrine bomb. Image copyright AP Japanese police have arrested a South Korean man suspected of bombing Tokyo's controversial Yasukuni shrine, local media said.

Japan police arrest South Korean man after war shrine explosion. My Korean Grandmother's Memories Of The Japanese Occupation And The Korean War. Instead of spending time over Seollal (Korean New Year) with my Father in-law’s side of the family in Suncheon, where I live in the far south of Korea, I headed to Seoul to celebrate Seollal with my mother in-law’s side and stayed at my wife’s grandmother’s house. I am not a great fan of Seollal and Chuseok, my experience of both holidays is a test of patience as I must sit around all day not doing much, and will-power to stop myself from saying the wrong thing to my various in-laws when they regularly give their two pennies worth on how I should be living my life. Korean Man Arrested for Bombing of Japanese War Shrine. A South Korean man has been arrested in connection with an explosion in a public restroom at Japan's controversial Yasukuni Shrine last month. Police say 27-year-old Jeon Chang-han was detained Wednesday after he arrived in Tokyo from South Korea.

So far, he has been charged with entering the shrine for unlawful purposes. The Meiji Restoration and Modernization. The Meiji Restoration and Modernization. Nationalism in the 20th Century by Joe Stevens on Prezi. The Balance of Power in Asia-Pacific Security: US-China Policies on Regional ... - Liselotte Odgaard. Koreans in Mongolia. Koreans in Mongolia form one of the Korean diaspora communities in Asia. They consist of both North and South Korean expatriates. South Koreans[edit] Japan Omnibus - History - 20th Century Japan. Google Maps.