Expression du but et cause

The complicated relationship between sports and politics. A new study suggests serious sports fans are likely to show strong support for the U.S. military — a finding that could help explain why some Americans react negatively to athletes kneeling during the national anthem. 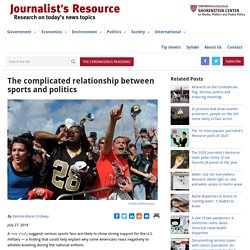 The study does not specifically address sports fans’ opinions about the national anthem or athletes kneeling during it as a form of political protest. However, for some fans, the military and “The Star-Spangled Banner” are closely linked, said one of the authors, Michael Serazio, an assistant professor of communication who teaches a course on sports, media and culture at Boston College.

“In the minds of those fans, the anthem and the [American] flag and the military are possibly interlocking in a way that to protest in the presence of one is to protest all of those elements,” he told Journalist’s Resource. Serazio teamed up with Emily A. They found that, generally speaking, Republicans are no more likely than Democrats to identify as sports fans. 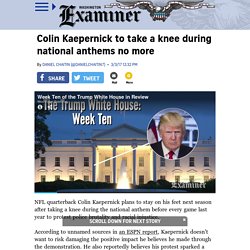 According to unnamed sources in an ESPN report, Kaepernick doesn't want to risk damaging the positive impact he believes he made through the demonstration. Drugs in Sport. Signification, définition dans le dictionnaire Anglais de Cambridge. Taking a knee: Why are NFL players protesting and when did they start to kneel?

Colin Kaepernick, the American football star who started the “take a knee” national anthem protest against police brutality has been named as the new face of Nike’s “Just Do It” campaign for its 30th anniversary. Kaepernick remains a free agent without a team at present, however, as the NFL appears reluctant to endorse his controversial gesture. Nike’s move has already sparked a protest from angry consumers who consider the quarterback’s stance “unpatriotic”, destroying the brand’s products and venting their displeasure on social media.

Download the new Indpendent Premium app Sharing the full story, not just the headlines A wave of players followed Kaepernick’s example last year, causing the protest to be morph into an act of direct resistance against Donald Trump after the president weighed in on the issue. Here’s what you need to know. When did this all start? Kaepernick’s protest first occurred 21 months ago but was not immediately noticed. Why is it gaining steam now? Who is protesting? Olympic Sports List - Summer and Winter Olympics. The Tokyo Organising Committee of the Olympic and Paralympic Games. 314739 314739 001 C. FIRST Trailer - The Official Film of the London 2012 Olympic Games. Colin Kaepernick explains why he sat during national anthem. SANTA CLARA, Calif. -- San Francisco 49ers quarterback Colin Kaepernick has willingly immersed himself into controversy by refusing to stand for the playing of the national anthem in protest of what he deems are wrongdoings against African Americans and minorities in the United States. 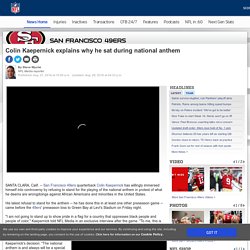 His latest refusal to stand for the anthem -- he has done this in at least one other preseason game -- came before the 49ers' preseason loss to Green Bay at Levi's Stadium on Friday night. "I am not going to stand up to show pride in a flag for a country that oppresses black people and people of color," Kaepernick told NFL Media in an exclusive interview after the game. "To me, this is bigger than football and it would be selfish on my part to look the other way. There are bodies in the street and people getting paid leave and getting away with murder. "