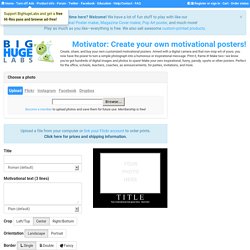 Welcome! We have a lot of fun stuff to play with like ourMotivational Poster maker, Magazine Cover maker, Pop Art poster, and much more! Play as much as you like—everything is free. We also sell awesome custom-printed products. Connecting the Common Core to iOS Apps K-3 - Home. Grade 3 Math - Connecting the Common Core to iOS Apps K-3. Best Apps for Teaching & Learning 2013. Science 360 by the National Science Foundation Level: ALL (grades K-12)Platform: iOS Website Science 360 is a science and engineering news app designed to engage the user in visual explorations through photos, videos, and text. 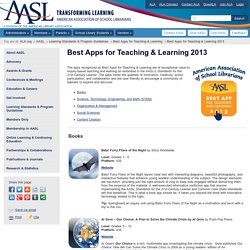 There is new content added weekly by scientists, engineers, and the National Science Foundation. Teachers can email image and videos to integrate into lesson planning. Tip: Have students explore Science 360 for possible science project ideas and explore current science in the news. CYBILS Short List Nominees for Book Apps in 2011 & 2012. Dragon Brush by Small Planet Digital The 2012 CYBILS award finalists have been announced and this adorable storybook app has made the cut. 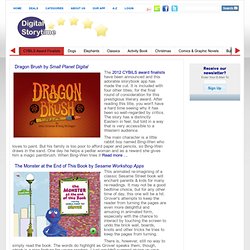 It is included with four other titles, for the final round of consideration for this prestigious literary award. After reading this title, you won't have a hard time seeing why it has been so well-regarded by critics. The story has a distinctly Eastern in feel, but told in a way that is very accessible to a Western audience. The main character is a little rabbit boy named Bing-Wen who loves to paint. The Monster at the End of This Book by Sesame Workshop Apps This animated re-imagining of a classic Sesame Street book will enchant parents & kids for many re-readings. Apps Gone Free (Best Daily Top App Deals) iPhone, iPad, Android Interactive books for kids. 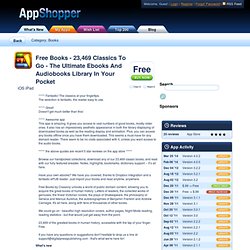 The classics at your fingertips.The selection is fantastic, the reader easy to use. ***** Great! Doesn't get much better than this! ***** Awesome appThis app is amazing. It gives you access to vast numbers of good books, mostly older ones. ***** the above quotes are recent 5 star reviews on the app store ***** Browse our handpicked collections, download any of our 23,469 classic books, and read with our fully featured ereader. Have your own ebooks? Free Books by Classicly unlocks a world of public domain content, allowing you to acquire the great books of human history. We could go on - beautiful high resolution covers, author pages, Night Mode reading, reading statistics - but that would just get away from the point. 23,469 of the greatest books in human history, accessible with the tap of your finger. If you have any questions or suggestions don't hesitate to drop us a line at support@digitalpresspublishing.com - that's what we're here for! 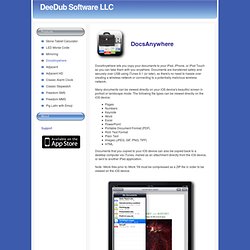 Documents are transferred safely and securely over USB using iTunes 9.1 (or later), so there's no need to hassle over creating a wireless network or connecting to a potentially malicious wireless network. Many documents can be viewed directly on your iOS device's beautiful screen in portrait or landscape mode. The following file types can be viewed directly on the iOS device: PagesNumbersKeynoteWordExcelPowerPointPortable Document Format (PDF)Rich Text FormatPlain TextImages (JPEG, GIF, PNG, TIFF)HTMLDocuments that you copied to your iOS device can also be copied back to a desktop computer via iTunes, mailed as an attachment directly from the iOS device, or sent to another iPad application.

Note: iWork files prior to iWork '09 must be compressed as a ZIP file in order to be viewed on the iOS device. Touch Karma (Parenting) (Entertainment) Keep Tabs on Everyone’s Good Deeds and Bad with Touch Karma app. 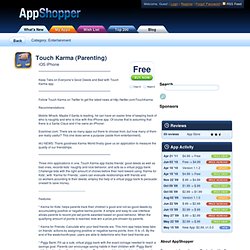 Follow Touch Karma on Twitter to get the latest news at Recommendations: Mobile Whack: Maybe if Santa is reading, he can have an easier time of keeping track of who is naughty and who is nice with this iPhone app. Of course that is assuming that there is a Santa Claus and if he owns an iPhone! Examiner.com: There are so many apps out there to choose from, but how many of them are really useful? I4U NEWS: Thank goodness Karma World finally gave us an application to measure the quality of our friendships. CarbonFin - Outliner for iPhone, iPod Touch, and iPad.