Kotaku. Video games rather than TV may be linked to childhood obesity. AUSTIN, Texas—A study by researchers at The University of Texas at Austin suggests that watching television is not associated with children’s weight, but playing electronic games may be—especially for girls. 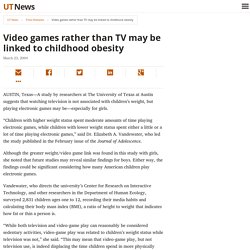 “Children with higher weight status spent moderate amounts of time playing electronic games, while children with lower weight status spent either a little or a lot of time playing electronic games,” said Dr. Elizabeth A. Vandewater, who led the study published in the February issue of the Journal of Adolescence. Although the greater weight/video game link was found in this study with girls, she noted that future studies may reveal similar findings for boys. Either way, the findings could be significant considering how many American children play electronic games. “While both television and video-game play can reasonably be considered sedentary activities, video-game play was related to children’s weight status while television was not,” she said.

Do Video Games Contribute to Childhood Obesity? An estimated 12.5 million children between the ages of 2 and 19 are obese, according to the U.S. 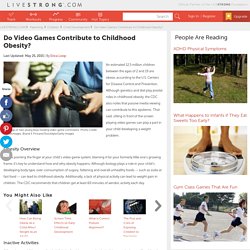 Centers for Disease Control and Prevention. Amateur Boxers Risk Brain Injury. Jan. 27, 2000 (Atlanta) -- A new study suggests that, from a medical perspective, the recent hit movie Fight Club might accurately have been called "Concussion Club" instead. 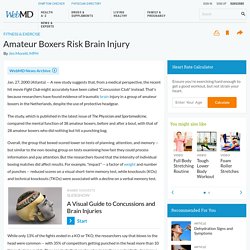 That's because researchers have found evidence of traumatic brain injury in a group of amateur boxers in the Netherlands, despite the use of protective headgear. The study, which is published in the latest issue of The Physician and Sportsmedicine, compared the mental function of 38 amateur boxers, before and after a bout, with that of 28 amateur boxers who did nothing but hit a punching bag. Overall, the group that boxed scored lower on tests of planning, attention, and memory -- but similar to the non-boxing group on tests examining how fast they could process information and pay attention.

But the researchers found that the intensity of individual boxing matches did affect results. WebMD SUGGESTS. Does Heading a Soccer Ball Cause Brain Damage? It has become clear that impact sports like football and boxing can cause long-term brain damage. 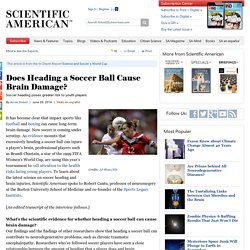 Now soccer is coming under scrutiny. As evidence mounts that excessively heading a soccer ball can injure a player’s brain, professional players such as Brandi Chastain, a star of the 1999 FIFA Women’s World Cup, are using this year’s tournament to call attention to the health risks facing young players. To learn about the latest science on soccer heading and brain injuries, Scientific American spoke to Robert Cantu, professor of neurosurgery at the Boston University School of Medicine and co-founder of the Sports Legacy Institute.

Health issues in American football. Teens and Video Games: How Much Is Too Much? The gamer community had a near-miss this week in Ohio, when a 15-year-old boy collapsed after playing "Call of Duty: Modern Warfare 3" for up to five days straight. 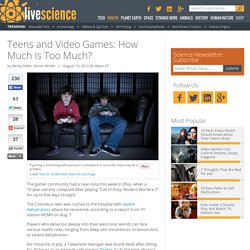 The Columbus teen was rushed to the hospital with severe dehydration, where he recovered, according to a report from TV station WCMH on Aug. 7. New Study Finds Links Between Video-Game Playing and Health Risks in Adults. San Diego, CA, August 18, 2009 – While video gaming is generally perceived as a pastime for children and young adults, research shows that the average age of players in the United States is 35. 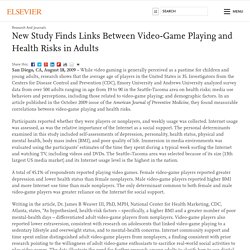 Investigators from the Centers for Disease Control and Prevention (CDC), Emory University and Andrews University analyzed survey data from over 500 adults ranging in age from 19 to 90 in the Seattle-Tacoma area on health risks; media use behaviors and perceptions, including those related to video-game playing; and demographic factors. In an article published in the October 2009 issue of the American Journal of Preventive Medicine, they found measurable correlations between video-game playing and health risks. 7 health benefits of playing video games. 1. 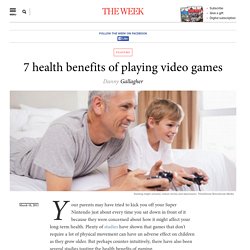 Video games are therapeutic for children with chronic illnessesThe University of Utah released a study last year that examined the effects of regular gaming on children diagnosed with illnesses like autism, depression, and Parkinson's disease. Kids who played certain games, including one designed just for the study, showed signs of improvement in "resilience, empowerment, and a 'fighting spirit.'" Researchers believe the games' ability to act on "neuronal mechanisms that activate positive emotions and the reward system" helped improve kids' demeanors as they faced the daily challenges of their illnesses. Can Video Games Solve Public Health Problems? The objective of the Internet-based "Re-Mission 2" games is simple: Kill cancer. 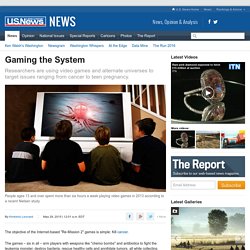 The games – six in all – arm players with weapons like "chemo bombs" and antibiotics to fight the leukemia monster, destroy bacteria, rescue healthy cells and annihilate tumors, all while collecting points and conquering levels. And for players who are battling cancer themselves, winning in the virtual world could have profound implications for their health in the real one.

Video Gaming May Lead to Higher Risk of Neurological Disorders. May 21, 2015 03:46 PM EDT You may choose to ignore your mom when she tells you to quit playing video games after hours of staring at the television, but she really has your best interest at heart. 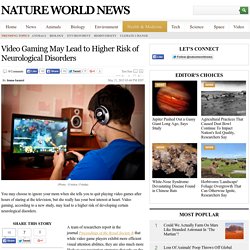 Video gaming, according to a new study, may lead to a higher risk of developing certain neurological disorders. A team of researchers report in the journal Proceedings of the Royal Society B that while video game players exhibit more efficient visual attention abilities, they are also much more likely to use navigation strategies that rely on the brain's reward system (the caudate nucleus) and not the brain's spatial memory system (the hippocampus). So what exactly does that mean?

Well, past research has shown that people who use caudate nucleus-dependent navigation strategies have decreased grey matter and lower functional brain activity in the hippocampus. Video gamers now spend a collective three billion hours per week in front of their screens. Playing computer games encourages obesity among teens by making them hungry. By Sophie Borland for the Daily Mail Updated: 01:01 GMT, 21 May 2011 Computer games make teenagers hungry and more likely to become obese, scientists claim. 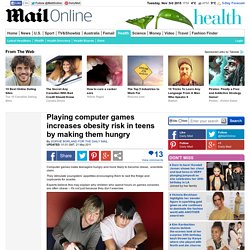 They stimulate youngsters’ appetites encouraging them to raid the fridge and cupboards for snacks. Physical Consequences of Gaming Addiction.