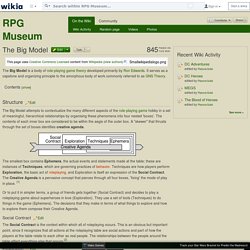 It serves as a capstone and organizing principle to the amorphous body of work commonly referred to as GNS Theory. Structure Edit The Big Model attempts to contextualize the many different aspects of the role-playing game hobby in a set of meaningful, hierarchical relationships by organising these phenomena into four nested 'boxes'. The contents of each inner box are considered to be within the aegis of the outer box. The smallest box contains Ephemera, the actual events and statements made at the table; these are instances of Techniques, which are governing practices of behavior.

Or to put it in simpler terms, a group of friends gets together (Social Contract) and decides to play a roleplaying game about superheroes in love (Exploration). Social Contract Edit. GNS Theory. Strictly, GNS theory is concerned with players' social interactions, but it has been extrapolated to direct game design, both in and outside the world of RPGs. 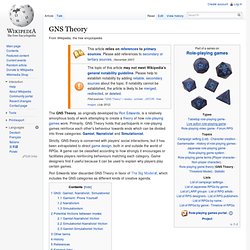 A game can be classified according to how strongly it encourages or facilitates players reinforcing behaviours matching each category. Game designers find it useful because it can be used to explain why players play certain games. Ron Edwards later discarded GNS Theory in favor of The Big Model, which includes the GNS categories as different kinds of creative agenda. GNS: Gamist, Narrativist, Simulationist[edit] Gamism: Prove Yourself[edit] Gamist refers to decisions based on satisfying clear predefined goal conditions in the face of adversity: in other words, on the desire to win.

I might as well get this over with now: the phrase "Role-playing games are not about winning" is the most widespread example of synecdoche in the hobby. Examples include, Magic: The Gathering, Chess, and most computer games. Narrativism[edit] History[edit] Features - What Is A Game? An Excerpt From Imaginary Games. [In this abridgement of the first chapter of new book Imaginary Games, available via this Amazon link, game designer, philosopher, and writer Chris Bateman, best known for the game Discworld Noir and the book Game Writing: Narrative Skills for Videogames, examines the game-as-art debate from an interesting new angle.] 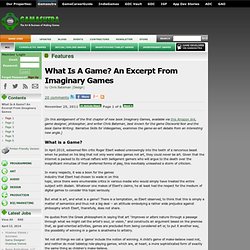 In April 2010, esteemed film critic Roger Ebert walked unknowingly into the teeth of a rancorous beast when he posted on his blog that not only were video games not art, they could never be art. Given that the internet is packed to its virtual rafters with belligerent gamers who will argue to the death over the insignificant minutiae of their preferred forms of play, this inevitably unleashed a storm of criticism.

In many respects, it was a boon for the games industry that Ebert had chosen to wade in on this topic, since there were enumerable critics in various media who would simply have treated the entire subject with disdain. Features - What Makes a Game? [Keith Burgun, founder and designer at 100 Rogues developer Dinofarm Games, argues that some video games are not "games" at all -- and posits a way to home in on the precise elements that make games engaging to players.] 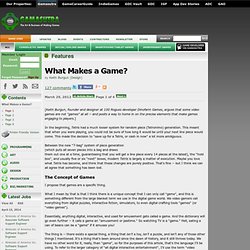 In the beginning, Tetris had a much looser system for random piece (Tetronimo) generation. This meant that when you were playing, you could not be sure of how long it would be until your next line piece would come. This made the decision to "save up for a Tetris, or cash in now" a lot more ambiguous. Between the new "7-bag" system of piece generation (which puts all seven pieces into a bag and draws them out one at a time, guaranteeing that you will get a line piece every 14 pieces at the latest), the "hold box", and usually five or six "next" boxes, modern Tetris is largely a matter of execution.

Ten Things Every Game Needs, Part 1. His is my daughter Rachel. 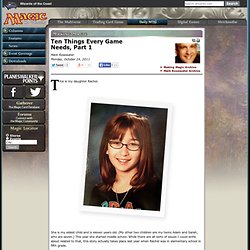 She is my eldest child and is eleven years old. (My other two children are my twins Adam and Sarah, who are seven.) This year she started middle school. While there are all sorts of issues I could write about related to that, this story actually takes place last year when Rachel was in elementary school in fifth grade.

No matter how much the ludologists may argue that anything that conforms to rules, goals and ‘play’ is a Game, the experience and construction of Tetris and Bioshock are clearly not the same – indeed, not even vaguely similar.. Calling both a ‘game’ by be technically true to ludology but the term fails to provide any useful clarity for understand both how each works and how each is made. The first process would be to bracket games out from each other in a way that avoids dysfunction and finds distinct conceptual commonality.