Rising 9th Grade Summer Reading: Theme-Family Relationships. The 17 Best YA Books Of 2014. Best Young Adult Books For Grown-Ups. In honor of National Support Teen Literature Day, we've collected the best books to pick up if you're in the mood for a little young adult lit. 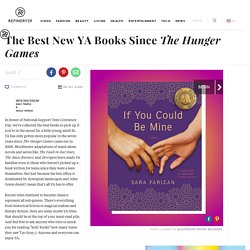 YA has only gotten more popular in the seven years since The Hunger Games came out in 2008. YALSA's Book Awards & Booklists. *YALSA has launched the new Teen Book Finder Database, which is a one-stop shop for finding selected lists and award winners. 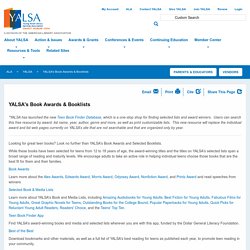 Users can search this free resource by award, list name, year, author, genre and more, as well as print customizable lists. This new resource will replace the individual award and list web pages currently on YALSA’s site that are not searchable and that are organized only by year. Looking for great teen books? Look no further than YALSA's Book Awards and Selected Booklists. While these books have been selected for teens from 12 to 18 years of age, the award-winning titles and the titles on YALSA's selected lists span a broad range of reading and maturity levels. 2015 Great Graphic Novels for Teens. The list of 79 titles, drawn from 108 official nominations, is presented annually at the ALA Midwinter Meeting. 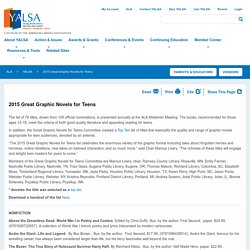 The books, recommended for those ages 12-18, meet the criteria of both good quality literature and appealing reading for teens. In addition, the Great Graphic Novels for Teens Committee created a Top Ten list of titles that exemplify the quality and range of graphic novels appropriate for teen audiences, denoted by an asterisk. Top Tuesday: Top Ten Most Anticipated Releases for the Rest of 2015. It’s pretty early for me to think about new releases coming out this year since many new books are released in the fall. 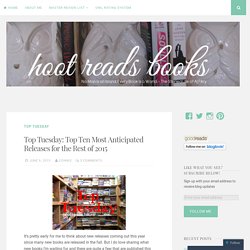 But I do love sharing what new books I’m waiting for and there are quite a few that are published this summer. I love waiting for new releases and as I have three Chapters gift cards to spend, this will be an excellent opportunity to look at books that I would like to pre-order. What Should I Read Next? Book recommendations from readers like you.

14 YA Restagings of Classic Works of Literature. With the recent success of Danielle Paige’s The Wonderful Wizard of Oz adaptation Dorothy Must Die, YA retelling of classic works of literature have jumped on the market radar. 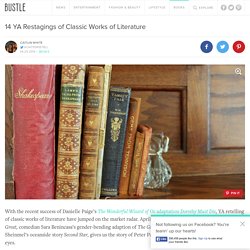 April also saw the release of Great, comedian Sara Benincasa’s gender-bending adaption of The Great Gatsby, and in Maay, Alyssa B. Sheinmel’s oceanside story Second Star, gives us the story of Peter Pan through a modern 17-year-old Wendy’s eyes. Though it seems like the YA community is now buzzing with these books, it’s certainly not a new trend. Even aside from fairy tales, many classic works of literature are being modernized. Some are told by the same protagonist, and some switch the viewpoint to a secondary character. William Shakespeare YA adaptations The Bard has given the world many opportunities to make his stories our own. Romeo and Juliet Romeo, Romeo, your story is primed for adaptation. The Tempest Twelfth Night. 25 Series to Read if you LOVE the Hunger Games! 44 Books to Read if You Love Twilight. 12 Books for People Who Loved Gone Girl — Barnes & Noble Reads. I expected to enjoy Gone Girl, but I wasn’t expecting to admire it. 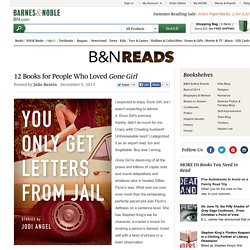 Librarians have gotten a bad rap in the past, represented as bookwormish and ‘uncool’. 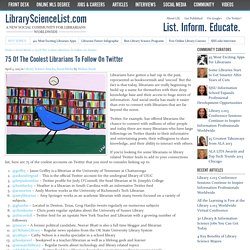 But the fact is that today, librarians are really beginning to build up a name for themselves with their deep knowledge base and their access to huge stores of information. And social media has made it easier than ever to connect with librarians that are far beyond the norm. Twitter, for example, has offered librarians the chance to connect with millions of other people and today there are many librarians who have large followings on Twitter thanks to their informative and entertaining posts, their willingness to share knowledge, and their ability to interact with others.

A Media Specialist's Guide to the Internet. The Unquiet Librarian. The Adventures of Library Girl. Quintessential summer reads. The Daring Librarian. What's New in YA - The Official YABC Blog. A Guide to YA Novels with LGBTQ Characters. Queer characters in young adult fiction are hardly ubiquitous; the majority of books still feature cisgender, heterosexual characters. 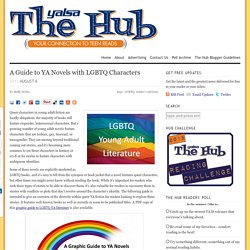 But a growing number of young adult novels feature characters that are lesbian, gay, bisexual, or transgender. They are moving beyond traditional coming out stories, and it’s becoming more common to see these characters in fantasy or sci-fi or for stories to feature characters with ambiguous identities. LGBTQ-Friendly YA Novels Get Award Nods, But Are They Getting a Crossover Audience? On March 6, the finalists for the 26th annual Lambda Literary Awards were announced, and they set records for the number of LGBTQ books submitted. 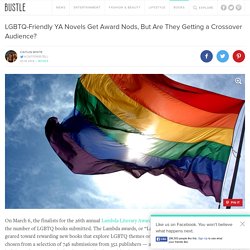 The Lambda awards, or “Lammys,” include several categories all geared toward rewarding new books that explore LGBTQ themes or characters. This year, the finalists were chosen from a selection of 746 submissions from 352 publishers — a Lammy record, and up from 2012, which had 687 and 332, respectively. These awards, along with other recent award nods may suggest a changing tide for LGBTQ lit, finally finding a strong foothold in the mainstream fiction and nonfiction YA marketplace. Transgender Themes in Young Adult Literature. John Green — Author of The Fault in Our Stars, Looking for Alaska, Paper Towns, and An Abundance of Katherines. 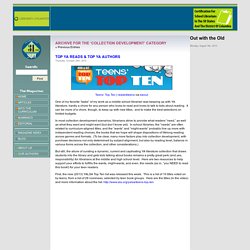 First, Boston.com (and other sources) printed a letter from the Director of the Watertown Free Library (July 22, Watertown, MA), explaining the library’s recently updated collection development policy. Developed over a period of six months, the new policy (among other goals) aims to refine the focus of the library’s local history collection by clearly establishing its scope. Why YA in the Classroom. Recently a report on high school students and reading levels came out with an alarming headline: “High Schoolers Reading at 5th Grade-Level.” Covered previously here at The Hub, the report gathered data suggesting that a majority of high school students are reading below grade level. It also asked an important question: what should kids be reading? One answer to this question is using more young adult literature in high school classes to increase interest and reading levels.

Related:  COLLECTION: Blogs   -  YA Collections   -  YALSA's Book Awards & Booklists   -  What Should I Read Next? Book recommendations from readers like you   -  A Media Specialist's Guide to the Internet   -  The Unquiet Librarian   -  The Adventures of Library Girl   -  The Daring Librarian   -  John Green — Author of The Fault in Our Stars, Looking for Alaska, Paper Towns, and An Abundance of Katherines   -  GUYS READ   -  Education   -  Enterprise