BWAD Commitee 2015 - Google Docs. Straight from the DOE: Dispelling Myths About Blocked Sites. Over the past few weeks, I’ve been hearing from frustrated teachers about surprising websites their schools block — everything from National Geographic to Skype. 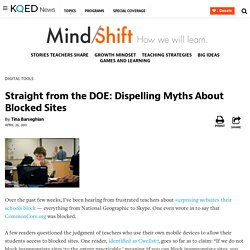 One even wrote in to say that CommonCore.org was blocked. A few readers questioned the judgment of teachers who use their own mobile devices to allow their students access to blocked sites. We Trust You 2013. Rosemary of New Canaan High School describes Somewhat Virtual Book Club (SWVBC) Exploring mind amplifiers since 1964.

Advocacy, Legislation & Issues. Cipa. Banned Web Sites: Are Your Policies Up-To-Date? In looking over an assignment to develop a library reconsideration policy that I gave to my graduate students, it occurred to me that an important information element is missing. 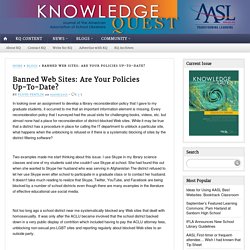 Every reconsideration policy that I surveyed had the usual slots for challenging books, videos, etc. but almost none had a place for reconsideration of district-blocked Web sites. While it may be true that a district has a procedure in place for calling the IT department to unblock a particular site, what happens when the unblocking is refused or if there is a systematic blocking of sites by the district filtering software?

Two examples made me start thinking about this issue. I use Skype in my library science classes and one of my students said she couldn’t use Skype at school. It's 404 Day! Join Us In Protesting Internet Censorship in US Schools and Libraries. Digital Citizenship. Teacher Resources. » Resources. Media and Technology Resources for Educators. What filters hide: a lesson. Title What filters hide DescriptionStudents will research common net issues with filtered sites. 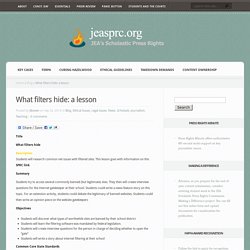 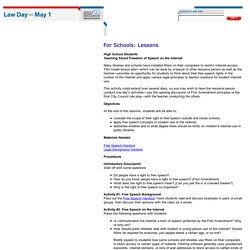 This model lesson plan—which can be done by a lawyer or other resource person as well as the teacher—provides an opportunity for students to think about their free speech rights in the context of the Internet and apply various legal principles to fashion solutions for student Internet use. This activity could extend over several days, so you may wish to have the resource person conduct one day’s activities—say the opening discussion of First Amendment principles or the final City Council role play—with the teacher conducting the others. Should schools block websites? Speak Outs - Should school libraries restrict access to the Internet? 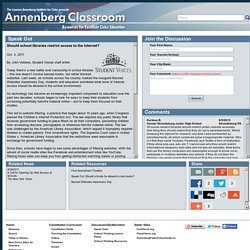 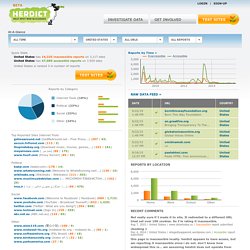 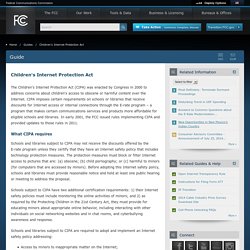 CIPA imposes certain requirements on schools or libraries that receive discounts for Internet access or internal connections through the E-rate program – a program that makes certain communications services and products more affordable for eligible schools and libraries. In early 2001, the FCC issued rules implementing CIPA and provided updates to those rules in 2011. What CIPA requires Schools and libraries subject to CIPA may not receive the discounts offered by the E-rate program unless they certify that they have an Internet safety policy that includes technology protection measures. 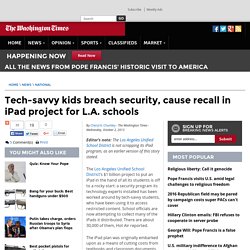 The Los Angeles Unified School District’s $1 billion project to put an iPad in the hand of all its students is off to a rocky start: a security program its technology experts installed has been worked around by tech-savvy students, who have been using it to access restricted content. School officials are now attempting to collect many of the iPads it distributed. There are about 30,000 of them, Hot Air reported. The iPad plan was originally embarked upon as a means of cutting costs from textbooks and classroom documents. The idea was that if students had iPads — and those devices were coded so that students could only access what teachers wanted them to view via preloaded educational software — then the upfront technology costs would soon be recouped. 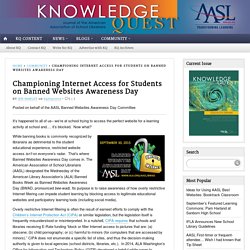 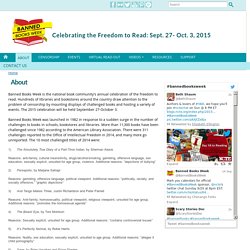 Hundreds of libraries and bookstores around the country draw attention to the problem of censorship by mounting displays of challenged books and hosting a variety of events. The 2015 celebration will be held September 27-October 3. Banned Books Week was launched in 1982 in response to a sudden surge in the number of challenges to books in schools, bookstores and libraries. Knowledge Quest September October 2015 by American Association of School Librarians.