International Journal of Serious Games. Haroldo-ok/twine-monogatari: Edit your visual novels on Twine and execute then on the Monogatari engine. Monogatari. Villanelle. Narrascope Keynote – Articy. NarraScope is a new games conference that supports interactive narrative, adventure games, and interactive fiction by bringing together writers, developers, and players. 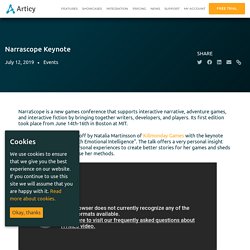 Its first edition took place from June 14th-16th in Boston at MIT. The conference was kicked off by Natalia Martinsson of Killmonday Games with the keynote talk “Shaping your story with Emotional Intelligence”. The talk offers a very personal insight into Natalia’s use of her personal experiences to create better stories for her games and sheds a light on how others can use her methods. L'émergence des jeux systémiques. Fabled Lands, todo un mundo por descubrir. GDC Microtalk: Emily Short - 'Creating Great Protagonists' 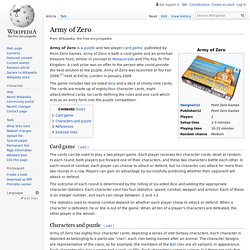 The cards are made up of eighty-four character cards, eight attack/defend cards, six cards defining the rules and one card which acts as an entry form into the puzzle competition. Card game[edit] The cards can be used to play a two-player game. Each player receives ten character cards, dealt at random. In each round, both players put forward one of their characters, and these two characters battle each other. The outcome of each round is determined by the rolling of six-sided dice and adding the appropriate character statistics. 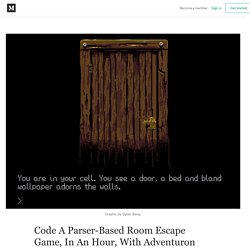 John Wilson of Zenobi software created the single-location Room Escape genre in the mid-80s with his “Behind Closed Doors” series of games in which the protagonist is trapped in a lavatory. For those that are unfamiliar, room escape games have a simple conceit. The protagonist is usually trapped in a room for some reason and must to escape by investigating and manipulating their environment. Typically there is a master puzzle (such as opening a door), and there are many many sub puzzles on the path to solving the master puzzle. Interview: Sam Barlow on Telling Lies – THE STORY FIX. Sam Barlow is a writer and game designer perhaps best known for his interactive movie Her Story, a murder mystery told entirely through police interrogation clips that was released in 2015. 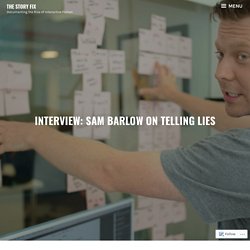 In it, players investigate a crime by searching and sorting through a database of videos, trying to piece together what happened and why. Her Story‘s dark, fragmented narrative proved to be an instant success for Barlow, receiving rave reviews and selling hundreds of thousands of copies almost overnight. Four years later, Barlow is set to release his next interactive opus, Telling Lies, a far more expansive game produced in partnership with Annapurna Interactive, the games imprint of Annapurna Films, known for producing some of Hollywood’s biggest indie films. 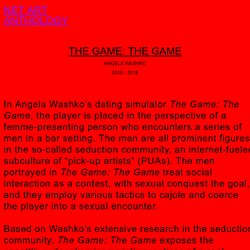 Content note: Your experience may include sexual situations, sexual violence, and/or offensive language. This game is not advised for players under the age of 18. The Game: The Game draws directly on techniques and strategies preached by professional seduction coaches, six of whom appear in the game. Among the multiple-choice response options available to players, Washko sometimes provides clever comebacks and impassioned retorts, while at other times emphasizing the player’s lack of agency or the PUA’s disregard for their boundaries or consent. 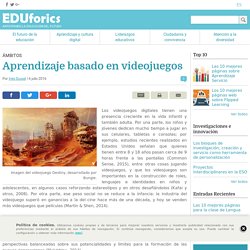 PuzzleTales » Interactive Puzzle Stories. My interactive fiction archive 2004-2019. I’m putting a massive 372 MB zip-file online which contains more or less all of my Interactive Fiction related creations of the period 2004-2019. 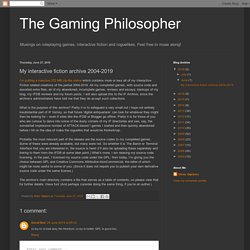 All my completed games, with source code and assorted extra files; all of my abandoned, incomplete games; reviews and essays; backups of my blog, my IFDB reviews and my forum posts. I will also upload this to the IF Archive, since the archive’s administrators have told me that they do accept such collections. What is the purpose of this archive? Partly it is to safeguard a very small but I hope not entirely insubstantial part of IF history, so that future ‘digital antiquarians’ can look for whatever they might then be looking for – even if sites like the IFDB or Blogger go offline.

Most Helpful Member Reviews 3 of 3 people found the following review helpful: Amazing premise in an amazing custom hypertext system, August 3, 2017Disclaimer: (Spoiler - click to show)Hi, this are the reviews I did in the the IFComp 2016. 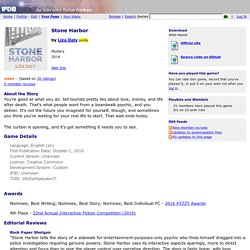 I’m Ruber Eaglenest. Co-author of The skyscraper and the scar, and entry of that year. The review is posted without edition, and need some context about how I reviewed and rated the games. Harmonia - Details. Most Helpful Member Reviews 10 of 10 people found the following review helpful: Harmonia, November 16, 2017 In college, I walked backward into nineteenth-century utopianism after obsessively rereading The Blithedale Romance. 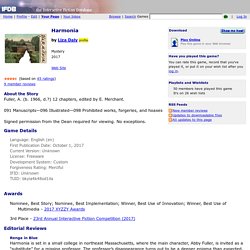 My Angel - Details. Baf's Guide A hauntingly told tale whose most important conceit can't be given away here without spoilers, this is largely puzzleless; the focus is on the story, and on the protagonist's relationship with the main NPC. 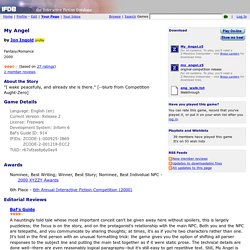 Both you and the NPC are telepaths, and you communicate by sharing thoughts; at times, it's as if you're two characters rather than one. It's told in the first person with an unusual formatting trick: the game gives you the option of shifting all parser responses to the subject line and putting the main text together as if it were static prose. The technical details are done well--there are even reasonably logical paragraphs--but it's still easy to get repetitive text. Still, My Angel is worth playing--it's much more notable for the relationship it depicts (and for the twist at the end) than for its formatting experiments.

Being Beyoncé’s assistant for the day: DONT GET FIRED THREAD… Zach-Like, la recopilación de documentos de diseño de Zach Barth, ya está disponible en Steam - Noticias en AnaitGames. Writing for Games - 01: Introduction — Greg Buchanan. First, a little about me and how I’m able to give advice about this: my name is Greg Buchanan. I am the writer of over 20+ game narratives across AAA, indie, mobile, VR, and more, including the 30 hour No Man’s Sky narrative update, Atlas Rises, and additional work for Metro: Exodus. I have been freelancing since 2015, starting with work on interactive narrative examinations, and am now spending much of my time producing my own indie titles and working on a novel, Sixteen Horses (Macmillan, 2021).

How To Become a Game Writer — Greg Buchanan. None of what I am about to argue means anything if you're not willing to promote your work and get the word out there about your game writing. This is why you need to ensure you have some projects you can publicly talk about. For all games I work on, I now insist that my contracts will allow me - once a game is released - to identify that I worked on a game, that I can feature it my portfolio, and that I can use samples for future writing applications.

Ideally, studios will allow you to identify your involvement before release, but your mileage may vary in this regard. Now: depending on your background, you may feel nervous or discouraged about the idea of promoting yourself, as if there is something wrong with that; be aware that those who argue against it frequently come from a position of privilege and security. Also know that as a freelancer, you are outside the normal marketing channels for a games studio and that you may be more limited than others in what you can talk about.

Search Results : Evil Hat Productions Online Store. Blackout: The Darkest Night by MiniChimera. Orihaus/InquisitorIF: An engine for browser and multiplatform Interactive Fiction works. If not us by ub4q. Twitter. Choose Your Own Autobiography (Neil Patrick Harris) I’m not a big reader of celebrity memoirs, but this one came my way for Christmas: Neil Patrick Harris’ autobiography takes the form of a choose your own adventure book, in which Neil’s life story, together with some made up incidents clearly recognizable as fantasy, are narrated as happening to “you”. This sounds like a gimmick, since the set of people who know of Neil Patrick Harris because of Dr.

Horrible or How I Met Your Mother likely has a good overlap with the set of people who retain warm fuzzy nostalgia feelings about Choose Your Own Adventure books. But it turns out that it’s formally interesting as a CYOA piece, too. No World Dreamers: Sticky Zeitgeist. By Porpentine & RookEPISODE 1: HYPERSLIME (free web version) Season 1 OSTXenoplast Scanning Array: Historic Calibration Test (property of INNOCENT) for ages 300+ and over contains embarrassing situations and slut stuff.

Excuses Galore is a free anti-adventure where you just want to stay at home. As nice as it is to see people, and do things, I definitely understand the urge to stay inside your cosy, familiar home instead. Excuses Galore! Is a richly varying text adventure where you have to avoid, brush off, or otherwise deter your many friends, who insist on wanting to see you, for some reason. I love that this choice-based text adventure features such a fully featured character creator (you're basically creating a name and face), as it really helps you to connect with the protagonist: a person who'd "much rather be curled up under a patchwork quilt doodling imaginary creatures" than see their friends.

Oxenfree - Elige tu destino… Avery alder sur Twitter : "Can I talk for a minute abt the current culture of TTRPG game jams? In tabletop, there have been game design competitions rolling around for years. Game Chef started around 2002. Golden Cobra started in 2014. But game jams, as s. You can watch all the talks we have uploaded so far on our 2018 playlist on our youtube channel. We also have talks from previous years so please check them out. #indiedev #gaming #advx18 #gamewriting. Demostrando #ForoTrajano y #MafiaZoo de @MalditoGamesES en nuestras #XjornadasQJ. Grandes juegos que nos hacen viajan a la antigua roma o Convertirnos en mafiosos animalitos.…