Game As A Service

From the Trenches: How to Grow a Live Game — Deconstructor of Fun. Speed is an underappreciated key to successfully running a live game. 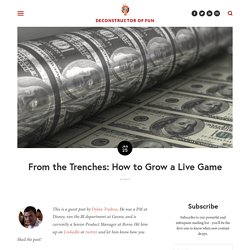 It’s tempting to wait for more data, re-run tests, and do everything one can to mitigate risks in such a volatile, difficult-to-analyze environment. A conservative approach is slow, however, and generates a relative paucity of learnings. A live game team (and studio culture!) Anders drachen's Blog - Building a Recommender System for Destiny Players. Does the success of PUBG prove we don't need progression systems in games? GDC Vault - Building the Content that Drives the Counter-Strike: Global Offensive Economy. How Episode became the world's biggest interactive fiction platform. It's likely that you haven't played Episode. 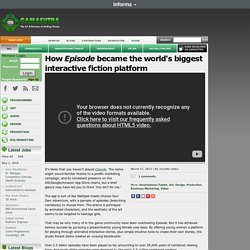 The name might sound familiar thanks to a prolific marketing campaign, and its consistent presence on the iOS/Google/Amazon App Store charts, but a brief glance may have led you to think 'this isn't for me.' The app is sort of like Wattpad meets Choose Your Own Adventure, with a panoply of episodes (branching narratives) to choose from. The drama is portrayed by animated characters, and the aesthetic of the art seems to be targeted to teenage girls. That may be why many of in the game community have been overlooking Episode. But it has achieved serious success by pursuing a predominantly young female user base. This chart visualizes why live-service games are the 'it' thing for publishers. The video game business is an expensive and risky hit-driven market. 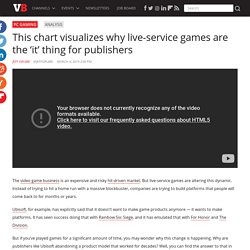 But live-service games are altering this dynamic. Instead of trying to hit a home run with a massive blockbuster, companies are trying to build platforms that people will come back to for months or years. Ubisoft, for example, has explicitly said that it doesn’t want to make game products anymore — it wants to make platforms. It has seen success doing that with Rainbow Six: Siege, and it has emulated that with For Honor and The Division. But if you’ve played games for a significant amount of time, you may wonder why this change is happening. Top Video Game Companies Won't Stop Talking About 'Games As A Service' How to keep players engaged (without being evil) How FIFA Delivers Live Content to Users Fast. The Story of Transformice: An Indie Game with 70 Million Players.

Twitch: "We're almost ready to go full-blown Hunger Games" Games as a service has "tripled the industry's value" Lifestyle Games - The Play's the Thing - Extra Credits. Weak AAA launches are a precursor to industry transition. GDC Vault. How Platforms Will Disrupt the Future of Media and Entertainment. In the next article of the series, “The Network Revolution: Creating Value through Platforms, People and Technology,” authors Barry Libert, Megan Beck and Jerry (Yoram) Wind look at how people and platforms are disrupting the media and entertainment industries. 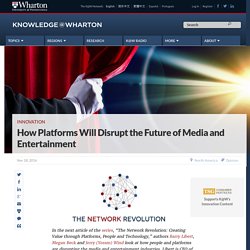 Libert is CEO of OpenMatters and Beck is the chief insights officer. Wind is a Wharton marketing professor and director of Wharton’s SEI Center for Advanced Studies in Management. The Riot Games API: Deep Dive. Hello all, Leigh Estes, aka RiotSchmick, here. 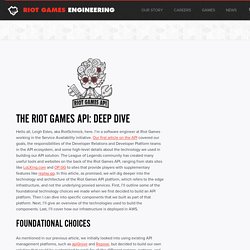 I’m a software engineer at Riot Games working in the Service Availability initiative. Our first article on the API covered our goals, the responsibilities of the Developer Relations and Developer Platform teams in the API ecosystem, and some high-level details about the technology we used in building our API solution. The League of Legends community has created many useful tools and websites on the back of the Riot Games API, ranging from stats sites like LoLKing.com and OP.GG to sites that provide players with supplementary features like replay.gg.

Beat it. A Retrospective of 'Need for Speed: Hot Pursuit' IO Interactive is chasing the most elusive target of all. EA plans for longer tails, marketing cycles. Deconstructor of Fun: How Destiny Is Revolutionizing Console Games With Freemium Mechanics. Deconstructor of Fun: Managing and Avoiding Content Treadmills. Valve experiments with more paid user-generated content in Dota 2. The Riot Games API: Goals and Design. Hello all, Leigh Estes, aka RiotSchmick, here. 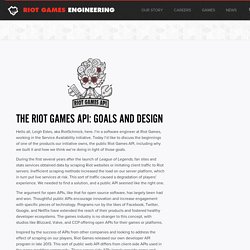 I’m a software engineer at Riot Games, working in the Service Availability initiative. Today I’d like to discuss the beginnings of one of the products our initiative owns, the public Riot Games API, including why we built it and how we think we’re doing in light of those goals. During the first several years after the launch of League of Legends, fan sites and stats services obtained data by scraping Riot websites or imitating client traffic to Riot servers. Inefficient scraping methods increased the load on our server platform, which in turn put live services at risk. This sort of traffic caused a degradation of players’ experience. The argument for open APIs, like that for open source software, has largely been had and won. Inspired by the success of APIs from other companies and looking to address the effect of scraping on our players, Riot Games released our own developer API program in late 2013. Xbox Live's new tournament tool makes Xbox One more attractive for esports developers.

Microsoft wants developers to use Xbox Live to facilitate the growing esports and pro-gamer scenes. 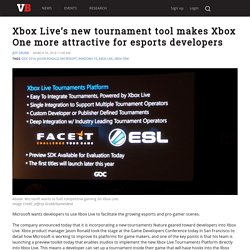 The company announced today that it is incorporating a new tournaments feature geared toward developers into Xbox Live. Xbox product manager Jason Ronald took the stage at the Game Developers Conference today in San Francisco to detail how Microsoft is working to improve its platforms for game makers, and one of the key points is that his team is launching a preview toolkit today that enables studios to implement the new Xbox Live Tournaments Platform directly into Xbox Live. This means a developer can set up a tournament inside their game that will have hooks into the Xbox Live multiplayer network. Newzoo forecasts the esports market to hit $463 million this year, but most of this comes from online PC games. Microsoft’s move here is clearly to expand Xbox beyond Halo and Call of Duty when it comes to esports. Feature Toggles. Feature toggles are a powerful technique, allowing teams to modify system behavior without changing code. 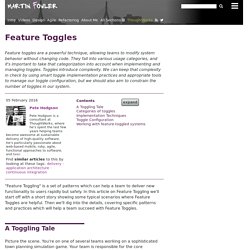 They fall into various usage categories, and it's important to take that categorization into account when implementing and managing toggles. Toggles introduce complexity. We can keep that complexity in check by using smart toggle implementation practices and appropriate tools to manage our toggle configuration, but we should also aim to constrain the number of toggles in our system. "Feature Toggling" is a set of patterns which can help a team to deliver new functionality to users rapidly but safely. In this article on Feature Toggling we'll start off with a short story showing some typical scenarios where Feature Toggles are helpful.

World of Tanks: Disrupting the Console Space with F2P. GDC 2011: Riot Games' League of Legends Postmortem. "Our mission is to be the most customer-centric game company in the world," said Tom Cadwell, design director of League of Legends, opening up a postmortem of the game at Game Developers Conference's Social & Online Games Summit in San Francisco.

"We go direct-to-customer, we follow a free-to-play business model, and we focus on an adaptive ideal for development. Our overall goal is to build a globally relevant game that will be successful around the world," he continued. He and senior producer Steve Snow shared "key lessons" the team has taken away from launching and running the game. One major concern is beta. Designing for Different Online Personality Types. In my work as a web psychologist, I’m exposed to many different types of user behavior and online decision-making processes. 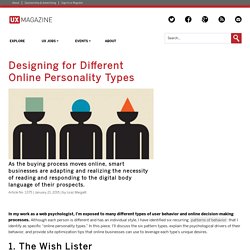 Although each person is different and has an individual style, I have identified six recurring patterns of behavior that I identify as specific “online personality types.” In this piece, I’ll discuss the six pattern types, explain the psychological drivers of their behavior, and provide site optimization tips that online businesses can use to leverage each type’s unique desires. 1. User-generated content is the future. Joost van Dreunen discusses how developers can embrace mods, YouTube videos and more Here’s an idea: interactive entertainment conditions us to make decisions and observe the outcome of our actions. Unsurprisingly, people have easily spent as much time trying to break games – cheating, for example – as they have playing them.

So it’s no surprise that a growing part of the gaming audience has started tinkering with existing games, resulting in an ever-expanding inventory of home-made modifications, add-ons, fan-made levels and so on. Avengers reassembled: How Gazillion rescued the struggling Marvel Heroes MMO. CEO David Brevik tells Develop how working with the community and being prepared to scrap everything helped turn things around.

Start Preventing Fires: How to Implement Proactive Customer Support. If we are to understand how we can provide better support for customers, we must first agree on a definition of customer support. In my view, customer support is the customer experience during normal interactions with a business, not only when problems arise. It’s about viewing the experience through their eyes, serving up solutions and interactions that WOW customers. This approach is known as proactive support. Many businesses, unfortunately, define customer service as their response to problems as they arise, which is called reactive support.

Though that method might satisfy your customer in the short term, it doesn’t optimize their overall experience with your brand. Media.steampowered.com/apps/steamdevdays/slides/economies.pdf. Media.steampowered.com/apps/steamdevdays/slides/ugc.pdf. Embracing User Generated Content. In-Game Economies in Team Fortress 2 and Dota 2. Microtalks: Retention Tips for Free-to-Play Genres. Community and Communication in Games-As-Services. Is Early Access Right for You?