Superfans: The Secret Weapon In Marketing. Online video will be more popular than Facebook and Twitter by 2017. Online video isn’t just growing fast, it’s growing faster than any other type of consumer service offering – and soon it’s going to be even more popular than Facebook, Twitter and Co, according to Cisco’s new Visual Networking Index forecast. 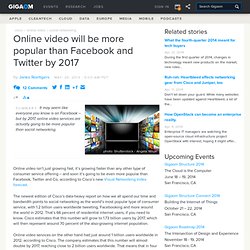 The newest edition of Cisco’s data-heavy report on how we all spend our time and bandwidth points to social networking as the world’s most popular type of consumer service, with 1.2 billion users worldwide tweeting, Facebooking and more around the world in 2012. That’s 66 percent of residential internet users, if you need to know. Cisco estimates that this number will grow to 1.73 billion users by 2017, which will then represent around 70 percent of the also-growing internet population. Online video services on the other hand had just around 1 billion users worldwide in 2012, according to Cisco. The company estimates that this number will almost double by 2017, reaching close to 2 billion users worldwide. Source: Cisco. Visual Networking Index: Forecast and Methodology, 2012–2017  [Visual Networking Index (VNI) June 10, 2014 This forecast is part of the Cisco® Visual Networking Index (VNI), an ongoing initiative to track and forecast the impact of visual networking applications. 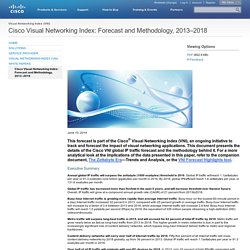 This document presents the details of the Cisco VNI global IP traffic forecast and the methodology behind it. For a more analytical look at the implications of the data presented in this paper, refer to the companion document, The Zettabyte Era—Trends and Analysis, or the VNI Forecast Highlights tool. Executive Summary Annual global IP traffic will surpass the zettabyte (1000 exabytes) threshold in 2016. Global IP traffic has increased more than fivefold in the past 5 years, and will increase threefold over thenext 5years. Busy-hour Internet traffic is growing more rapidly than average Internet traffic. Metro traffic will surpass long-haul traffic in 2015, and will account for 62 percent of total IP traffic by 2018. Content delivery networks will carry over half of Internet traffic by 2018. Video Highlights Figure 1.

Fans Crush Brands When It Comes to YouTube. YouTube is increasingly becoming the most influential social network, and the place where pop culture is born. 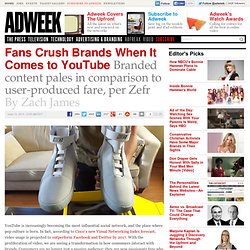 In fact, according to Cisco’s new Visual Networking Index forecast, video usage is projected to outperform Facebook and Twitter by 2017. With the proliferation of video, we are seeing a transformation in how consumers interact with brands. Consumers are no longer just a passive audience; they are now passionate fans who are actively participating in driving value for brands. And while there’s been lots of talk about brands acting as publishers, we’re increasingly finding that fans drive more value by creating videos about the brands and products that they love.

No Sales For Social? Although a company’s social site can do well for branding, loyalty and customer word of mouth, new research from Forrester shows that social sites are not currently creating direct sales. 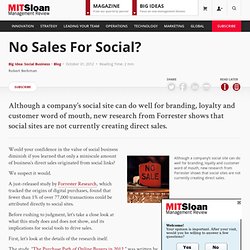 Would your confidence in the value of social business diminish if you learned that only a miniscule amount of business’s direct sales originated from social links? We suspect it would. A just-released study by Forrester Research, which tracked the origins of digital purchases, found that fewer than 1% of over 77,000 transactions could be attributed directly to social sites. Before rushing to judgment, let’s take a close look at what this study does and does not show, and its implications for social tools to drive sales.

First, let’s look at the details of the research itself. The key question is: What to make of this? Turns out Americans aren't the most obsessed social media users. Social media is massively popular, but as it turns out, people in the U.S. aren’t as hopelessly addicted to the Internet as you might think – at least compared to some other countries. 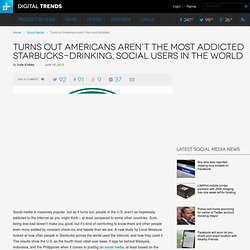 Sure, being less bad doesn’t make you good, but it’s kind of comforting to know there are other people even more addled by constant check-ins and tweets than we are. A new study by Local Measure looked at how often people in Starbucks across the world used the Internet, and how they used it. The results show the U.S. as the fourth most rabid user base; it lags far behind Malaysia, Indonesia, and the Philippines when it comes to posting on social media, at least based on the data collected at these Starbucks locations. Now, the study only looks at how often people are going on social media at Starbucks, so if people in those countries are more apt to log in at the cafe than people in the U.S., the results could be skewed.