Your Danish boss: Less like a general, more like a coach. Audio Player In an anti-authoritarian country like Denmark, being a boss is a precarious (social) position. 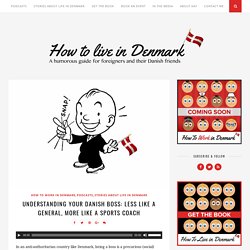 Danish bosses don’t like to flaunt their authority. In fact, when you enter a room of Danes, it is often difficult to tell which one is the boss. The social cues that point to a big cheese in other cultures – the flashy watch, the oversize office, the glamorous yet servile executive assistant – are considered poor taste in egalitarian Denmark. So are the booming, take-charge personalities many foreigners may expect from a boss. Denmark is a flat country. This means fewer layers of people to keep an eye on you, which can be a refreshing thing, but also fewer people around to help if you’re going off the rails entirely. Less like a general, more like a sports coach Trying to figure out their Danish boss can be difficult for foreigners. A Danish boss is less like an army general and more like a sports coach. Then she sets them loose on the playing field, to go do their jobs. Budweiser Gets Crafty With Limited-Edition 1933 Repeal Reserve 10/24/2017. Budweiser has unveiled its latest effort to boost sales: 1933 Repeal Reserve, a limited-edition brew employing a recipe from the days of Prohibition. 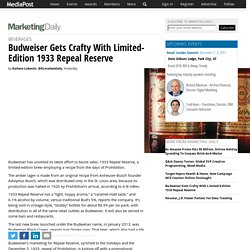 The amber lager is made from an original recipe from Anheuser-Busch founder Adolphus Busch, which was distributed only in the St. Louis area, because its production was halted in 1920 by Prohibition’s arrival, according to A-B InBev. 1933 Repeal Reserve has a “light, hoppy aroma,” a “caramel-malt taste,” and 6.1% alcohol by volume, versus traditional Bud’s 5%, reports the company. It’s being sold in vintage-style, “stubby” bottles for about $8.99 per six-pack, with distribution in all of the same retail outlets as Budweiser. It will also be served in some bars and restaurants. advertisement. Cars from Tesla's (TSLA) anticipated Shanghai factory are still likely to face a 25% import duty in China. When you were young, what did you dream of when you looked to the future? 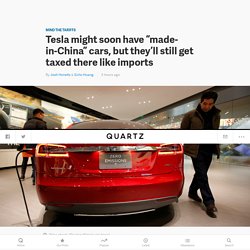 Did it have anything to do with the exploration of the unknown? Of pushing back the frontiers and limits of our knowledge? Of discovering new worlds, new forms of life, or even entirely new civilizations? When the original Star Trek series first aired, it presented a far different view of the future than any that had come before. Rather than humanity fighting an evil alien presence or continuing our own petty, earthly squabbles in a different setting, we had become a peaceful race. More than fifty years after Star Trek’s inception, its legacy continues to capture our collective imaginations. Tricorders “You’re showing the same distorted readings,” says Dr. The original tricorders were large, boxy objects that performed various functions, and were essential equipment among science and medical personnel. VISORs Universal translators “Heghlu’meH QaQ jajvam!”

Learn how to write for Quartz Ideas. How to Measure Share of Voice: SEO, PPC and Social Media. One of the things that keeps marketers fretting late at night is trying to decide which metrics to measure. 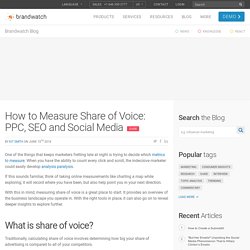 When you have the ability to count every click and scroll, the indecisive marketer could easily develop analysis paralysis. If this sounds familiar, think of taking online measurements like charting a map while exploring; it will record where you have been, but also help point you in your next direction. With this in mind, measuring share of voice is a great place to start. It provides an overview of the business landscape you operate in.

With the right tools in place, it can also go on to reveal deeper insights to explore further. What is share of voice? Traditionally, calculating share of voice involves determining how big your share of advertising is compared to all of your competitors. The definition is now often widened to encompass online visibility in general, including organic search, PPC and social media. Your Brand Advertising / Total Market Advertising = Share of Voice. Growth Hacking Definition: the Definitive one. Growth Hacking Definition: the Definitive one. 15-fresh-insights-into-how-apple-runs-its-business.amp. Amp.businessinsider. As Apple CEO Tim Cook made clear at the company's recent iPhone launch event in Cupertino, he's still guided by Steve Jobs. 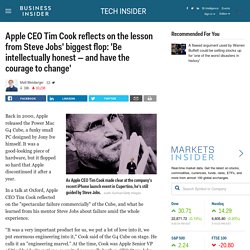 Justin Sullivan/Getty Images Back in 2000, Apple released the Power Mac G4 Cube, a funky small PC designed by Jony Ive himself. It was a good-looking piece of hardware, but it flopped so hard that Apple discontinued it after a year. In a talk at Oxford, Apple CEO Tim Cook reflected on the "spectacular failure commercially" of the Cube, and what he learned from his mentor Steve Jobs about failure amid the whole experience. M&A Brand Study: The first quantitative M&A brand benchmark. NEW YORK (10 October 2017) — In 2015 and 2016, mergers and acquisitions accounted for more than $8 trillion of business value. 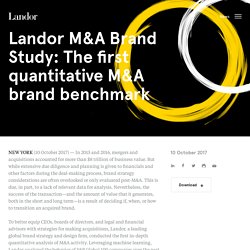 But while extensive due diligence and planning is given to financials and other factors during the deal-making process, brand strategy considerations are often overlooked or only evaluated post-M&A. Our brands - Oath. Il gelato come una volta.