Compact Kitchen Folds Up And Hides When Not Needed. Images credit Johanneke Procee Almost every kitchen you see, no matter how big or how small, seems to have the same form, an upper cabinet a foot deep, a lower cabinet two feet deep, and a counter in the middle. 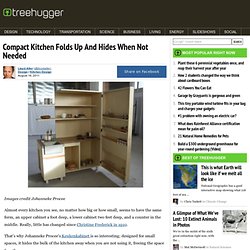 A Portable, Foldable House Made For Art Collectors. Recyclable materials are all the rage in architecture nowadays, but L.A. 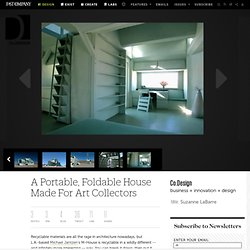 -based Michael Jantzen’s M-House is recyclable in a wildly different -- and infinitely more interesting -- way. You can break it down, then put it back together again, anywhere in the world, in virtually any shape, size, or configuration. It’s the ultimate house for the 21st century nomad. BuBbLe. RVs Trailers. Cricket Trailers For Commune Style Road Trips The Cricket Trailer will take you in any drivable new direction with a flexible, efficient, environmentally thoughtful design. 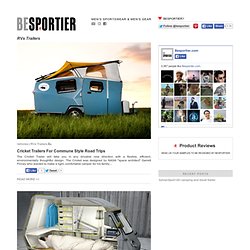 The Cricket was designed by NASA "space architect" Garrett Finney who wanted to make a light, comfortable camper for his family.... High Class Trailer Parks - The Joshua Tree and Suite Home Prove That Mobile Can be Classy.

Fold out rooms and furniture 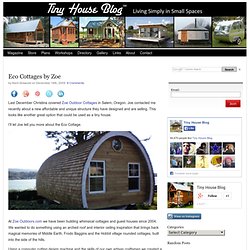 Sustainable Hand Hewn Timber Frame. One of my google alerts brought this beautiful timber frame to my attention. 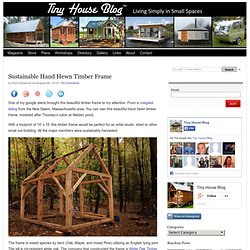 From a craigslist listing from the New Salem, Massachusetts area. You can own this beautiful hand hewn timber frame, modeled after Thoreau’s cabin at Walden pond. With a footprint of 10’ x 15’ this timber frame would be perfect for an artist studio, shed or other small out-building. Timber Framing a North Idaho Cabin. Tiny Houses - Less is More. Habitaflex - Foldable Tiny House. The Folding and Transportable Home. 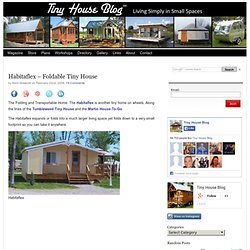 The Habitaflex is another tiny home on wheels. Along the lines of the Tumbleweed Tiny House and the Martin House-To-Go. Das Parkhotel in Austria - Weird Accommodation. Most people would like o spend their holidays in the nicest places possible and also to have the best accommodation they can afford, so that they can enjoy the free time at its best. 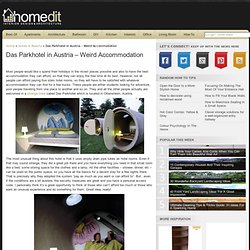 However, not all people can afford paying five stars hotel rooms, so they will have to be satisfied with whatever accommodation they can find for a few bucks. These people are either students looking for adventure, poor people traveling from one place to another and so on. They and all the other people actually are welcomed in a strange hotel called Das Parkhotel which is located in Ottensheim, Austria.

The most unusual thing about this hotel is that it uses empty drain pipe tubes as hotel rooms. ALAIN BERTEAU DESIGNWORKS. Portable and Foldable Tiny House. The company who makes this tiny house is called Habitaflex, and you might actually consider it a small house instead of a tiny one. 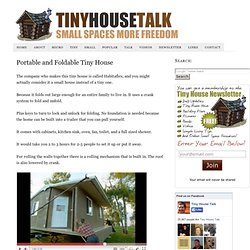 Because it folds out large enough for an entire family to live in. It uses a crank system to fold and unfold. Plus keys to turn to lock and unlock for folding. No foundation is needed because the home can be built into a trailer that you can pull yourself. It comes with cabinets, kitchen sink, oven, fan, toilet, and a full sized shower. The Tiny Life » Tiny House. In an effort to tell the whole story about tiny houses I felt it necessary to show the not so pretty side of tiny houses. 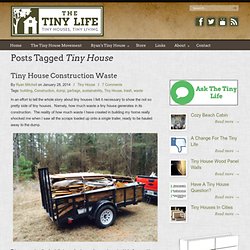 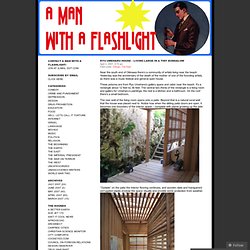 Yesterday was the anniversary of the death of the mother of one of the founding artists, so there was a music festival and general open house. These pictures are from Ryu Umehara’s gallery space and cabin near the beach. It’s a rectangle about 12 feet by 36 feet. The central two-thirds of the rectangle is a living room and gallery for Umeharu’s paintings; the rest is a kitchen and a bathroom.

The rear wall of the living room opens onto a patio. “Outside” on the patio the interior flooring continues, and wooden slats and transparent corrugated plastic enclose the space visually and provide some protection from weather. The patio also gives access to two stairways (that shape on the bottom right is the second one) to the roof: Some Assembly Required: The Porcupine Playdome. I don't know if only crazy people build domes, or if building a dome makes you crazy, but by the end of the day, I have to admit, crazy and domebuilding go together like peanut butter and jelly.

The clean lines of the exterior translate to the inside with a simple layout that serves three bedrooms, living room, kitchen, bath and loft. Via Inhabitat. Sustainable Systems & Designs. John Paananen. Suburban Nomad: Hybrid Igloo, Yurt, Tent + Tipi Home Idea. The juxtaposition of such lifestyle extremes – fixed-space suburban living and nomadic world-travel dwelling – makes for a fascinating conceptual challenge. It was, in fact, similarly neighboring opposites that gave rise to the idea in the mid of design student living on a lovely nature-filled campus but surrounded by suburbia on all sides. John Paananen took it upon himself to discover what would happen if he were to make over one of the most mobile kinds of traditional buildings – the tipi, with inspiration from its yurt, tent and igloo cousins – turning it into a stationary home with all of the creature comforts to be found in contemporary suburbs. Stealth Bathroom: Wood Shelves Hide Secret Toilets & Sinks. Sure, a bathroom is a sometimes-unsightly necessity for any home – but its interior can at least be made modestly more minimalist by hiding the essential fixtures when not in use, and more modern and comfortable through the use of linear and repetitive wooden design objects.

Clean and contemporary, a series of fold-up solid-wood shelves hide a concealed sink and disguise the toilet. Steel Hide-a-House: Secret Storage Container Home Plans. Compact Cork Tent: Easy & Eco-Friendly Camping Cylinder. Titled ‘Tree House’, this clever little mobile sheltered is named after its constituent material rather than its location – composed of sustainable cork it is a flat-pack portable dwelling made to replace conventional synthetics-based tents. Bubbles of Luxury: Inflatable Spheres for Modular Camping. When you head into the wild, privacy may be of little concern as you progress further from the beaten path – views to and connections with nature may, instead, become a higher priority. $1000 Egg House on Wheels for a Working Urban Architect. Flat-Pack Mobile Home: The Swiss Army Knife of Apartments.

Since its first iterations over a century ago, the Swiss Army Knife has evolved into the household name and industry standard for compact multipurpose design in the realm of tools … now another firm from Switzerland has taken aim at doing the same thing for portable living. Made to fit everything from minivans and station wagons to compact cars, the Swiss Room Box folds and unfolds to create every essential room of a house … all from four core modules requiring no special tools or outside parts to assemble or deploy.

Green Prefab Shed Homes: Small Space Living by Design. Sheds do not sound like something you would want to live in, but as modern modular, mobile and miniature houses become increasingly popular sustainable living space options, well, even products dubbed with titles like the Big Shed and Little Shed is not such a bad idea. Bold Construction Page 2 of 2 - Forbes.com. Positive News, Green Things, Microcredit and The Green Children.