Homemade Almond Milk (+ Almond Meal) - Nature's Nurture. Yesterday, I shared with you the super easy tutorial for making almond butter (and other nut butters), and as I expected, it was a huge hit! 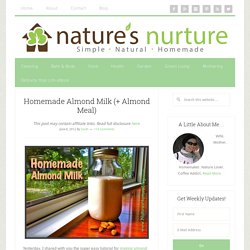 If you haven’t checked it out yet, you can view it here. Today, we’re making almond milk, and I think it’s just as awesome, if not more so! Hubby and I only recently started getting into the world of almond milk, to tell you the truth. Not because of any dairy allergies or anything; we were just interested in venturing out and trying alternatives to cow’s milk. My Favourite Homemade Almond Milk + Step By Step Photos. I first tried making homemade almond milk a couple years ago, after many of you told me so many amazing things about it. 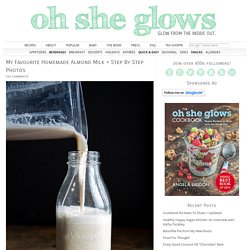 Homemade organic almond milk. Almond milk is simple to make at home, and is a great nondairy milk alternative. 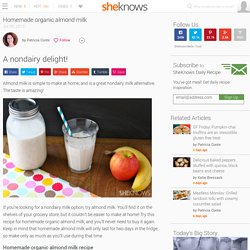 The taste is amazing! If you're looking for a nondairy milk option, try almond milk. You'll find it on the shelves of your grocery store, but it couldn't be easier to make at home! Try this recipe for homemade organic almond milk, and you'll never need to buy it again. Keep in mind that homemade almond milk will only last for two days in the fridge, so make only as much as you'll use during that time. How-to Make Nut Milk. How-to Make Nut Milk I am super excited to share this tutorial with you guys! 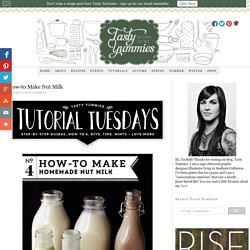 Many of you have asked for a tutorial on nut milks, since I started the Tutorial Tuesdays Series. I have been making my own nut milks for quite a few years now. Once I realized just how simple it was, I have made a quart of almond milk nearly every single week. I also love making variations on the flavors, at least once a month I make a quart of raw cacao almond nut milk.

Much like my nut butter post, this is a general overview on how to make nut milks, but really the sky is the limit. How to Make Nut Milk: 3 Easy Recipes. Nut milks are all the rage—and they’re a great alternative to dairy. 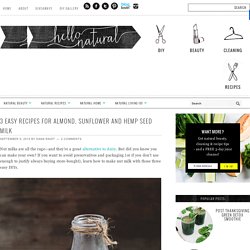 But did you know you can make your own? If you want to avoid preservatives and packaging (or if you don’t use enough to justify always buying store-bought), learn how to make nut milk with these three easy DIYs. Note: Homemade nut milks will not last as long as store-bought. Store in the coldest part of your refrigerator (in an airtight container) 2-3 days before discarding. How to Make Almond Milk (Step by Step) – Recipe. When almond milk was first on the market, my brother visited my house and spied a carton of almond milk in the refrigerator. 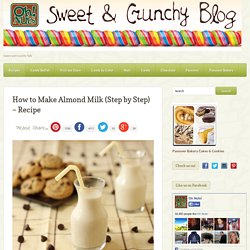 Picking it up, he snorted derisively and asked, “How do you milk an almond?” Almond milk–and other milk alternatives–have come a long way since those early days! Now multiple brands and flavors can be found in many grocery stores, and people are recognizing that they’re not just for the lactose intolerant–many folks simply enjoy the slightly nutty flavor and ultra-creamy texture of almond milk. You can purchase almond milk easily enough, but along with those almonds comes lots of sugar, preservatives, stabilizers, and other not-so-natural ingredients. How to Make Your Own Hemp Seed Milk & Almond Milk. One of the best lessons I learned in my years working for Free People is that almost anything you can buy from a store, you can make yourself. 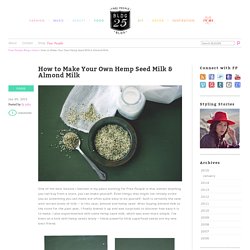 Even things that might not initially strike you as something you can make are often quite easy to do yourself. Such is certainly the case with certain kinds of milk – in this case, almond and hemp seed. After buying almond milk at the store for the past year, I finally looked it up and was surprised to discover how easy it is to make. I also experimented with some hemp seed milk, which was even more simple. I’ve been on a kick with hemp seeds lately – these powerful little superfood seeds are my new best friend. I touched on the many benefits of hemp protein powder in this post, and after using the powder for a little while I went and got a bag of hemp seeds to experiment with. To make it, all you have to do is mix 1 cup of raw, shelled hemp seeds with 3 cups of filtered water. 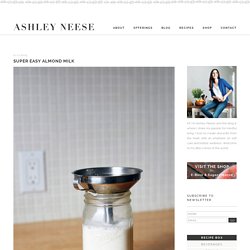 I am happy to share a staple recipe with you today, Almond Milk. This is the exact recipe I’ve been using for 5 years and it’s amazing. We’re lucky to have found an incredible source for the freshest raw almonds I’ve ever had. This almond milk is so flavorful it tastes like almond extract! Crazy right? Packaged almond milk has been getting a ton of bad press because of all the additives and the heavy processing that goes into it. Almond milk contains loads of vitamin E which is essential for glowing, radiant skin. How To Make Almond Milk at Home — Cooking Lessons from The Kitchn. I have peer pressure to thank for my newfound love of homemade almond milk. 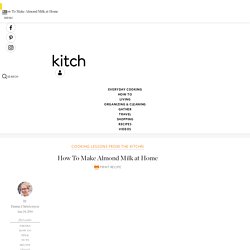 Two of my friends have been making it for months, and I've been regularly treated to their exclamation-filled exchanges about its incredible creaminess, mellow milky flavor, and all-around superiority over store-bought. I finally got to try a glass for myself a few weeks ago, and in this case, peer pressure definitely wins. This stuff is good. Really good. Homemade Almond Milk. Don’t worry, I’m not going all Euell Gibbons on you. 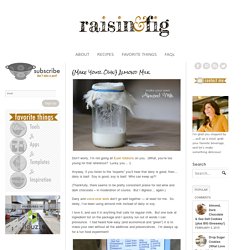 (What, you’re too young for that reference? Lucky you… !) Anyway, if you listen to the “experts” you’ll hear that dairy is good, then… dairy is bad! Soy is good, soy is bad! Who can keep up?! (Thankfully, there seems to be pretty consistent praise for red wine and dark chocolate – in moderation of course. Dairy and voice-over work don’t go well together — at least for me. How to Make Coconut Milk - Modern Hippie Housewife. Officially my first blog post! I’ve chosen to share my coconut milk recipe first because I use it in so much of my cooking and other recipes.

In my home, we don’t drink milk unless it’s fermented (*yogurt*), so I use coconut milk as a substitute in my baking, coffee, cereal, soups and sauces. The best part is is that it’s always on-hand because I keep a big of shredded coconut in my pantry. Try this recipe below and then feel free to play around with the coconut to water ratio–this is just what I liked. Ingredients – 1 ½ cups of unsweetened, shredded coconut – 4 cups filtered warm water (I use boiled water, and let it cool to warm) How it’s Made Combine water and coconut in a blender and let it soak for about 30 min.

The greatest thing I’ve figured out how to make so far is homemade cashew milk. As somebody who is sensitive to both soy and almonds, learning to make cashew milk turned out to be a total lifesaver. This stuff is my new favorite “milky” beverage, and it’s super easy to make. Why make cashew milk, besides the fact that it’s so yummy? Cashew milk has lots of health benefits.