Middle Class Blue Collar Man Weighs In On Bernie Sanders. A friend of mine posted a rant on Facebook and I felt it was too good to not share. 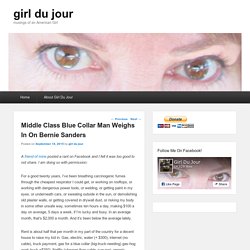 I am doing so with permission: For a good twenty years, I’ve been breathing carcinogenic fumes through the cheapest respirator I could get, or working on rooftops, or working with dangerous power tools, or welding, or getting paint in my eyes, or underneath cars, or sweating outside in the sun, or demolishing old plaster walls, or getting covered in drywall dust, or risking my body in some other unsafe way, sometimes ten hours a day, making $100 a day on average, 5 days a week, if I’m lucky and busy. In an average month, that’s $2,000 a month. And it’s been below the average lately. Rent is about half that per month in my part of the country for a decent house to raise my kid in. That’s fifty bucks extra a month. ☆[I’m worried, at this point in my little essay here, I will begin to lose those of you who don’t vote, or aren’t into politics.

When Republicans talk about the second amendment, I listen. No, Bernie Sanders is not going to bankrupt America to the tune of $18 trillion. Here is the full speech made by Democratic presidential candidate Bernie Sanders at Liberty University in Virginia on September 14, 2015. 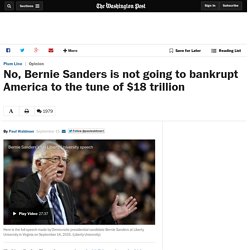 (Liberty University) The big policy headline today comes from the Wall Street Journal, which delivers this alarming message: Price Tag of Bernie Sanders’ Proposals: $18 Trillion Holy cow! He must be advocating for some crazy stuff that will bankrupt America! The answer isn’t quite so dramatic: while Sanders does want to spend significant amounts of money, almost all of it is on things we’re already paying for; he just wants to change how we pay for them. Price Tag of Bernie Sanders’s Proposals: $18 Trillion. Bernie Sanders keeps promise made in private to Sandra Bland’s mother. Bernie Sanders speaks at a rally in Los Angeles on Oct. 14. 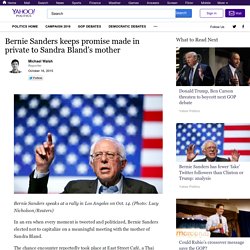 (Photo: Lucy Nicholson/Reuters) In an era when every moment is tweeted and politicized, Bernie Sanders elected not to capitalize on a meaningful meeting with the mother of Sandra Bland. The chance encounter reportedly took place at East Street Café, a Thai restaurant at Union Station in Washington, D.C., five days before the first Democratic presidential debate. The Rev.

Hannah Adair Bonner, a pastor at St. The pastor said she approached Sanders and asked if he would like to meet Reed-Veal and told him their group had asked if he would take a picture with them. “He did not impose upon Ms. Bonner, who is a Black Lives Matter activist, said she was impressed by everyone’s sincerity during the serendipitous moment. The Democratic presidential candidate told Reed-Veal that the death of her daughter was inexcusable and promised he would continue to “say her name.” Bernie Sanders' Elephant in the Room. Op-Ed by Nick Bernabe September 21, 2015 (ANTIMEDIA) San Diego, CA —America’s new favorite populist has a foreign policy problem —one his loyal supporters continually downplay and war-loving Republicans have declined to criticize. 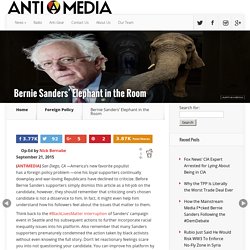 Before Bernie Sanders supporters simply dismiss this article as a hit-job on the candidate, however, they should remember that criticizing one’s chosen candidate is not a disservice to him. In fact, it might even help him understand how his followers feel about the issues that matter to them. Think back to the #BlackLivesMatter interruption of Sanders’ campaign event in Seattle and his subsequent actions to further incorporate racial inequality issues into his platform.

Also remember that many Sanders supporters prematurely condemned the action taken by black activists without even knowing the full story. Democratic Debate Revealed Sanders' True Strength. Bernie Sanders was the clear winner in the first debate among candidates for the Democratic Party's presidential nomination. 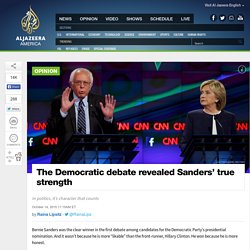 And it wasn’t because he is more “likable” than the front-runner, Hillary Clinton. He won because he is more honest. Hillary Clinton's “likeability” has received a lot of attention over the years. Does she come across as warm and caring? Does she have a sense of humor? For some voters, or at least some Beltway pundits, likability is a compelling factor in deciding who to vote for. The debate was promoted on CNN as a kind of cage fight for political nerds: “Democratic candidates in one another's face for the first time” read the text at the bottom of the screen. Bernie Sanders was the only candidate who wasn't visibly resentful of Cooper’s confrontational tone. By contrast, Sanders’ rivals resorted to lame excuses to justify or absolve them of their past mistakes. 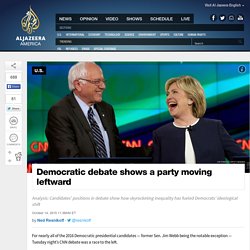 Jim Webb being the notable exception — Tuesday night’s CNN debate was a race to the left. That was especially true for the two leading candidates, front-runner Hillary Clinton and runner-up Sen. Bernie Sanders of Vermont. Sanders, a democratic socialist, has staked his campaign on a pledge to combat wealth inequality and to import elements of Nordic social democracy to the United States; Clinton has hewed closer to the center, but nonetheless said Tuesday that she supports efforts to check “the excesses of capitalism. " Overall, the party on display during the debate appeared to be a far cry from the one led by welfare reformer and financial deregulator President Bill Clinton in the early 1990s.

“This debate felt like a real primary — and the Elizabeth Warren wing of American politics has clearly shifted the center of gravity in the Democratic Party,” the PCCC said.