So cute you could crush it? The neuroscience of "cute aggression" Summary: Some people feel an overwhelming sense of wanting to commit an act of aggression when they see a cute baby animal. 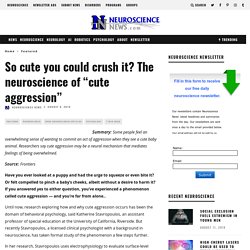 WHO takes transgenderism out of mental illness category. Transgender people, who identify as the opposite gender to the one they were born with, should no longer be considered mentally ill, according to a new UN categorisation. 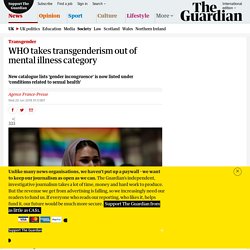 The World Health Organization issued a new catalogue Monday covering 55,000 diseases, injuries and causes of death, in which it discreetly recategorised transgenderism. The new catalogue, which still needs to be approved by UN member countries, so-called “gender incongruence” is now listed under “conditions related to sexual health”, instead of “mental, behavioural and neurodevelopmental disorders”. “We expect (the re-categorisation) will reduce stigma,” Lale Say, the coordinator of WHO’s department of reproductive health and research, said. WHO says gender incongruence is characterised as a “marked and persistent incongruence between an individual’s experienced gender and the assigned sex.” What does running do to your brain?

It may seem obvious – as you push on through a long run, veering wildly between sensations of agony and elation – that running can have a huge effect on your state of mind. 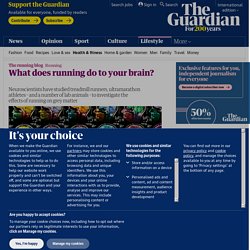 It is an intuitive idea that a growing number of neuroscientists have begun to take seriously, and in recent years they have started to show us what actually plays out on the hills and valleys of your grey matter as you run. Their findings confirm what many runners know from their own experience: we can use running as a tool to improve the way we think and feel. And we are now learning precisely why running can return focus, vanquish stress and improve mood.

Plus we know why – if you’re lucky – you might get a brief glimpse of nirvana. It would be crazy to believe that running is a universal solution to all of our psychological challenges. But if covering immense distances can be counter-productive, it is clear now that more moderate runs can result in very real benefits. Unwrapped: the psychology of gift giving. As big dates approach and the pressure to deliver grows, the gift giver, without the benefit of a straightforward request, faces a familiar quandary: “What the hell do I buy?” 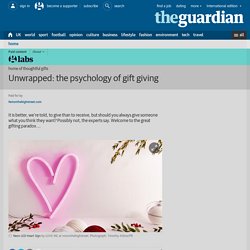 How do I not only honour but also reflect the closeness of our bond in an object – something that can be wrapped and stuffed into one of those paper bags with ribbon handles that we all think we like but then stuff in a cupboard, never to use again? Gift giving is a practical exercise, but also a psychological one. A 2006 study by neuroscientists at the National Institutes of Health found that the giver experiences both an increase in their dopamine levels and an activation of parts of the brain that are attuned to the joys of social interaction. It really does make us happy. For as long as there have been gifts, our instinct has told us to make choices based on the recipient. Charles Manson’s prosaic and ugly life is over. But his loser cult lives on. 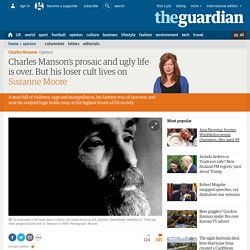 There is no resting in peace for such a person. At his trial, Manson told the prosecutor Vincent Bugliosi that he was already dead. He had said previously that he had been dead for 2,000 years, part of the confused allusions he made to being Christ. The terrible murders he committed in 1969 and his courtroom testimony transfixed America. The cult leader was finally starring in his own movie, strutting and fretting his hour upon the stage – a short, long-haired man full of violence, rage and manipulation. Now, if you care to look on the internet, Manson’s ramblings are memorialised on various websites, like inspirational quotes complete with images.

Pop culture’s dark obsession with Charles Manson – from Guns N’ Roses to Mad Men. There is a certain grim irony in the fact that Charles Manson’s trial and conviction on seven counts of first-degree murder got him what he wanted. 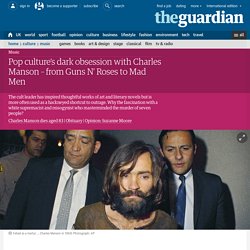 He finished up on the front of Rolling Stone magazine, a cover apparently designed to make him look exactly like the rock star he had always dreamed about becoming. His music got a wider audience. Before the trial was over, Manson’s debut album had been released, albeit on a tiny label set up expressly for the purpose by his friend, record producer Phil Kaufman, rather than one of the major companies he had courted in the late 60s.

That was an era when Neil Young attempted to interest Warner Bros Records in Manson’s “unbelievable” music; an offshoot of MCA had been sufficiently interested to pay for Manson to record some demos; and Dennis Wilson had mooted him as a potential artist for the Beach Boys’ own label Brother, successfully lobbying the band to record one of his songs, Cease to Exist, under the title Never Learn Not to Love. The shorter your sleep, the shorter your life: the new sleep science. Matthew Walker has learned to dread the question “What do you do?” 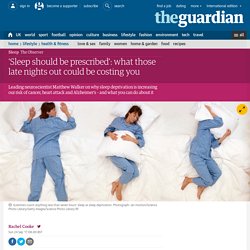 At parties, it signals the end of his evening; thereafter, his new acquaintance will inevitably cling to him like ivy.