BBC Two - War in the Blood. THE FAULT IN OUR STARS (2014) Extended Official HD Trailer. Peggy is diagnosed with brain cancer - EastEnders 2016 - BBC One. T-cell therapy: Have we just discovered a cure for cancer? A new treatment for cancer has been held as a potential “cure” — but is that true? 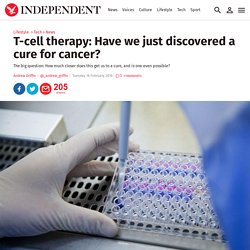 A cure for cancer is often held as the ultimate achievement of medical science, and science of any kind. But any meaningful cure is likely to come slowly and in patches, and a complete cure might never arrive at all. But the new results are a “paradigm shift”, according to the lead scientist on the paper. The work has been called unprecedented in its hugely successful results, which has had a huge impact on those patients with specific kinds of cancer. Why are we asking this now? Potential cures for cancer are regularly reported. The new research potentially confirms a new form of therapy for cancer, to sit alongside chemo- and radio-therapy. How does it work? The treatment works by using special methods to get around the tricks that cancer cells have to avoid them being spotted by the body’s immune system. The treatment works through a process of genetic modification. How successful is it? Why isn’t it a cure? Jade Goody has died after she lost her battle with cancer. 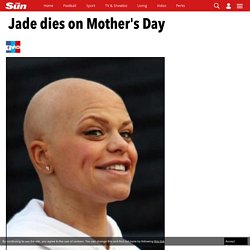 The Big Brother favourite died aged 27 of cervical cancer after a seven-month battle against the disease. She passed away peacefully in her sleep at 3.55am on Mother's Day at her home in Upshire, Essex, surrounded by her heartbroken husband Jack Tweed, mother Jackiey, and close family friend Kevin Adams. Jade's mum Jackiey said today: "I've lost my beautiful girl.

" She came out of the house in her pyjamas to watch as a hearse took Jade's body away. She said: "Jade died at 3.55am this morning. Jade died exactly one month after she married Jack in a ceremony surrounded by friends and family. Tributes poured in to the tragic reality TV star, who leaves behind two sons, Bobby, five, and Freddie, four. Jade’s spokesman Max Clifford said: “She’s been so brave. "She died as she lived in the public eye. "It was her way of handling it. Eastenders- Sonia Reveals She Has Found a Lump. Angelina Jolie has double mastectomy due to cancer gene. Hollywood actress Angelina Jolie has undergone a double mastectomy to reduce her chances of getting breast cancer. 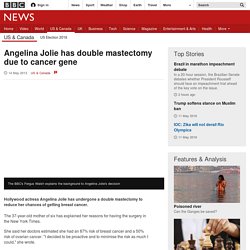 The 37-year-old mother of six has explained her reasons for having the surgery in the New York Times. She said her doctors estimated she had an 87% risk of breast cancer and a 50% risk of ovarian cancer. "I decided to be proactive and to minimise the risk as much I could," she wrote. Her partner, Brad Pitt, praised her choice as "absolutely heroic". Risk reduced Ms Jolie said the process began in February and was completed by the end of April. In an article entitled My Medical Choice, she explained that her mother fought cancer for nearly a decade and died at the age of 56. She said she had sought to reassure her children that the same illness would not take her away from them, "but the truth is I carry a 'faulty' gene, BRCA1, which sharply increases my risk of developing breast cancer and ovarian cancer".

Ms Jolie has three biological children and three adopted children. Cancer tumour genetics reveal possible treatment revolution. A landmark discovery into the genetic makeup of tumours has the potential to open a new front in the war on cancer, delivering potent therapies that are tailored to individual patients, scientists have said. 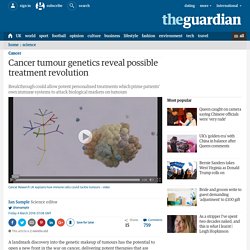 The breakthrough comes from research into the genetic complexity of lung and skin cancers which found that even as tumours grow and spread around the body, they carry with them a number of biological “flags” that the immune system can be primed to attack. Because the flags, which appear as surface proteins, are found only on cancer cells, they provide what scientists described as “exquisite targets” for new therapies that draw on the power of the immune system to combat cancer. Treatments that harness the immune system have shown great promise against some forms of cancer, such as melanoma, but they do not work in everyone.

One approach releases the brakes on the immune system, unleashing the full force of killer T cells, which are otherwise dampened down by cancer cells.