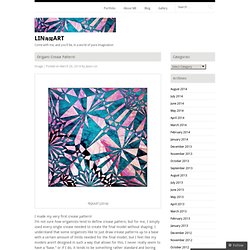 I’m not sure how origamists tend to define crease pattern, but for me, I simply used every single crease needed to create the final model without shaping. I understand that some origamists like to just draw crease patterns up to a base with a certain amount of limbs needed for the final model, but I feel like my models aren’t designed in such a way that allows for this. I never really seem to have a “base,” or if I do, it tends to be something rather standard and boring like a preliminary base or waterbomb base. So I suppose if you were to fold along all of these lines in the correct direction, it would end up as a horse! It’s kind of cool to think that this seemingly random array of pieces has this underlying order behind it. Crease Patterns as Art. If one takes the narrowest possible dictionary definition of the term, a "crease pattern," or CP, is nothing more than a set of lines that is a representation of some subset of folds in an origami shape, real or imagined. 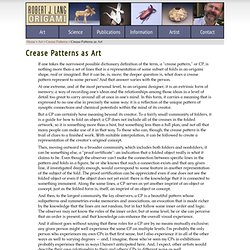 But it can be, is, more; the deeper question is, what does a crease pattern represent to some person? And that answer varies with the person. At one extreme, and at the most personal level, to an origami designer, it is an extrinsic form of memory: a way of recording one's ideas and the relationships among those ideas in a level of detail too great to carry around all at once in one's mind. In this form, it carries a meaning that is expressed to no one else in precisely the same way: it is a reflection of the unique pattern of synaptic connections and chemical potentials within the mind of its creator. 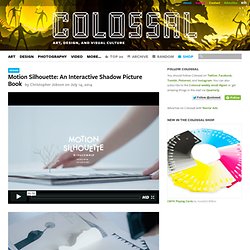 As a light source is directed toward either side, a different moving image is projected on the page to help tell the story. Fun! Motion Silhouette is a sequel to an earlier book by the duo titled, simply, Silhouette. The books are made to order by hand (for about $60), and you can inquire through their website. (via KYOT∆®) Your beautiful eyes on Behance. Artist Embroiders Notebook With Veins, Holograms, And Floral Patterns. Chara, an artist from Athens, creates beautiful and intricate embroidered notebooks. 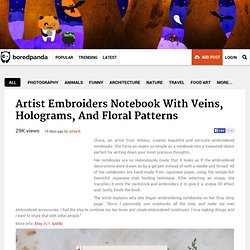 She turns an object as simple as a notebook into a treasured object perfect for writing down your most precious thoughts. Her notebooks are so meticulously made that it looks as if the embroidered decorations were drawn on by a gel pen instead of with a needle and thread. All of her notebooks are hand-made from Japanese paper, using the simple but beautiful Japanese stab binding technique. After selecting an image, she transfers it onto the cardstock and embroiders it to give it a unique 3D effect and, lastly, binds the book.

The artist explains why she began embroidering notebooks on her Etsy shop page: “Since I personally use notebooks all the time, and make my own embroidered accessories, I had the idea to combine my two loves and create embroidered notebooks. More info: Etsy (h/t: lustik) Color Theory. More Sacred Geometry, Star Portals and Mandalas for Meditation. I want to share some more of the Sacred Geometry creations I have put together, I start to honestly feel that these images alter the way I think about my surroundings, they tap directly into some consciousness within me, almost like life coming together and building itself in the shapes of these seemingly simple but deceptively complex formations. 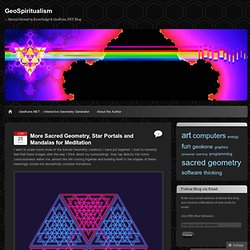 There is something very powerful here in the interlaced play of the red and blue colours While looking at these pictures in a state of meditation, I can feel how they alter my consciousness somehow directly, with the patterns starting to live a life of their own within my subconsciousness, mind and everything, affecting how I sense everything around me, like the patterns in themselves are starting to grow beyond my monitor, into my existence and altering the way in which I connect to the energies around me, allowing me to focus on a pattern that lets me calibrate my reality into, like offering a blueprint into the way life operates in itself.