What's a Private BitTorrent Tracker, and Why Should I Use One? Private trackers are my primary source for all content. 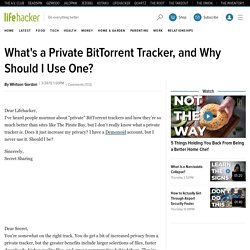 I've staffed at private trackers before, though I don't really have as much free time for that as I used to anymore. My advice to those interested is to think about what they're looking for. While a site like BTN is pretty low stress (ratioless, seed for X hours and you're all set), a site like What.CD is incredibly daunting to new users, especially those not used to maintaining a ratio.

If you don't have the benefit of a very fast connection or external server with such a connection, it'll take months of dedication, uploading your own torrents, and seeding everything you snatch 24/7 before you're anywhere close to comfortable, ratio-wise. Those who know me know I have a somewhat involved role there, and I deal with inquiries about ratio building on a daily basis. It takes a very specific kind of person to succeed on a public tracker.

The Best Ebook Torrent Sites. Ebookshare - eBook Torrent,Free eBooks Download. The Pirate Bay launches crazy Physibles category for printing 3D objects. In the next few years, physical replicas of objects could feasibly be pirated if The Pirate Bay has anything to say about it. 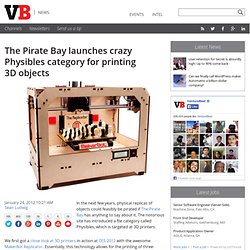 The notorious site has introduced a file category called Physibles, which is targeted at 3D printers. We first got a close look at 3D printers in action at CES 2012 with the awesome MakerBot Replicator. Essentially, this technology allows for the printing of three-dimensional objects by melting and fusing bits of plastic, layer by layer.

Things like toys, chess pieces, gears, artwork, cups, bowls, and more are already possible to “print” at home. The Pirate Bay, however, is taking the idea of 3D printing further by adding a pirated file type meant for 3D printers. We believe that the next step in copying will be made from digital form into physical form. We wholeheartedly agree that it will take some time before this idea becomes feasible, but we can’t wait to see what comes next from the makers of 3D printers and scanners. What Would It Take For You to Stop Pirating? 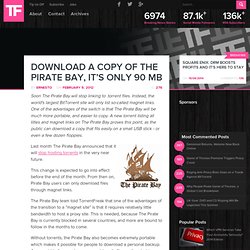 Instead, the world's largest BitTorrent site will only list so-called magnet links. One of the advantages of the switch is that The Pirate Bay will be much more portable, and easier to copy. A new torrent listing all titles and magnet links on The Pirate Bay proves this point, as the public can download a copy that fits easily on a small USB stick - or even a few dozen floppies. Last month The Pirate Bay announced that it will stop hosting torrents in the very near future. This change is expected to go into effect before the end of the month. The Pirate Bay Says Goodbye to (Most) Torrents on February 29. The Pirate Bay has confirmed that all torrent files being shared by more than 10 people will be deleted on February 29. 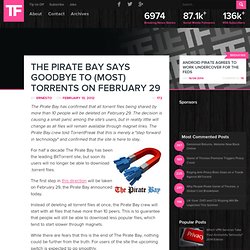 The decision is causing a small panic among the site's users, but in reality little will change as all files will remain available through magnet links. The Pirate Bay crew told TorrentFreak that this is merely a "step forward in technology" and confirmed that the site is here to stay. For half a decade The Pirate Bay has been the leading BitTorrent site, but soon its users will no longer be able to download .torrent files. The first step in this direction will be taken on February 29, the Pirate Bay announced today. Instead of deleting all torrent files at once, the Pirate Bay crew will start with all files that have more than 10 peers. While there are fears that this is the end of The Pirate Bay, nothing could be further from the truth. Although it might take a little longer for less popular downloads to get started, all files will remain available. Torrent Downloading: the Absolute Best Torrent Software of 2011. 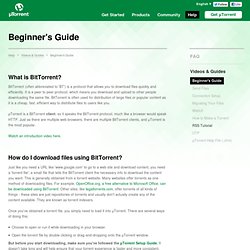 BitTorrent (often abbreviated to 'BT') is a protocol that allows you to download files quickly and efficiently. It is a peer to peer protocol, which means you download and upload to other people downloading the same file. BitTorrent is often used for distribution of large files or popular content as it is a cheap, fast, efficient way to distribute files to users like you. µTorrent is a BitTorrent client, so it speaks the BitTorrent protocol, much like a browser would speak HTTP.