The Enigma Puzzle Box - All. I now have added a locking device in the form of a solenoid. 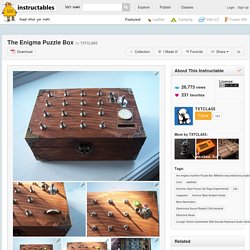 When the amber LED lights up, the solenoid pulls in its plunger from the "lock" (a piece of MDF with a hole in it) and the box opens. I have updated the images to show this change. So first off I apologize for not making a formal instructable. When I started this project all I wanted to do was jump right in and get it done. If you have any questions regarding the box's construction, coin slot construction, or circuit design, please leave a comment and I'll try to assist you as much as possible.

Pi Record Streamer. Web powered antique wind gauge. Portable Pen-Testing Hack Box. The inspiration for this project came from the desire to create something that would explore topics of Computer Science and Cyber Security. 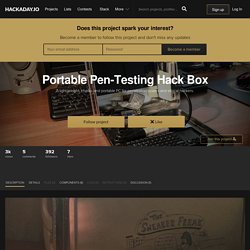 It also stems from the want to create a cheap tool that could be used for hackers. Essentially a inconspicous, droppable hack box. One that can perform common pen-testing attacks. Storyphone. So far we have a working playback system and a functional hook switch mounted to a plastic box I've used a million times. 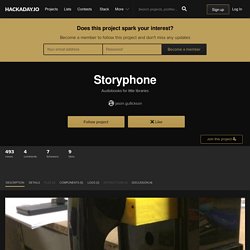 YDE - You Do Exist. My business partners shorted my company tens of thousands of dollars and laid off my entire team, and then my cat died because I couldn't take it to the vet. 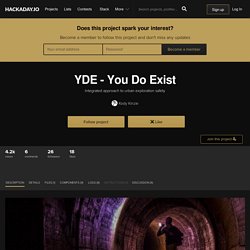 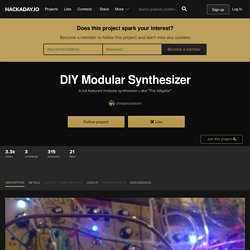 47 Raspberry Pi Projects to Inspire Your Next Build. If you’re looking for inspiration for your first Raspberry Pi project, look no further than the several dozen projects entered in the first ever Raspberry Pi Design Contest, sponsored by MCM Electronics. 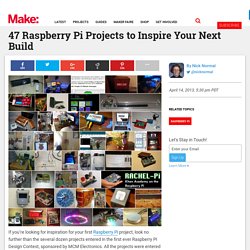 Building a Better Robot. On designing LEO, the walking, talking 3D printer When I began writing the first draft of the LEO the Maker Prince story, I was excited about the opportunity to create fictional robot characters. 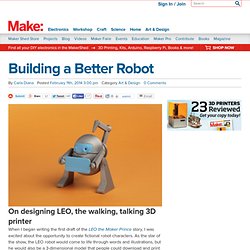 As the star of the show, the LEO robot would come to life through words and illustrations, but he would also be a 3-dimensional model that people could download and print as a memento from the book. It was quite a large creative challenge, but also one that allowed me to bring several aspects of my background together in one effort. In my work outside of the LEO project, I am a professional product designer with a specialty in smart objects and robotics.

SunBEAM Seeker Bot. BEAM robotics is a way of thinking about and building robots with roots in the “behaviorist” or “actionist” robotics movement of the 1980s. Rather than relying on microprocessors, programming, and digital logic, BEAM designs favor discrete components, stimulus-response control systems, and analog logic. From a design perspective, BEAM robotics is about getting the most complex and interesting behaviors using the simplest circuits, actuators, and components. Data Dial Dashboard. If your dials don't move into place, open the Arduino IDE's "Serial Monitor" window at 115200 baud and check the output. 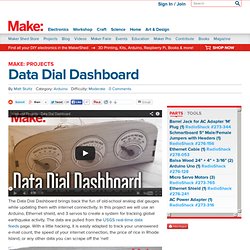 Here you can see status updates as the device attempts to connect to the web to download the data it needs to update the dials. Once it has made a connection, the dial output values will also report in the Serial Monitor window. If you see the error message "Failed to configure Ethernet using DHCP," check to make sure your Ethernet cable is plugged in and your network is configured to use DCHP. 3 Projects to Help You Fight for Your Online Privacy. Today, February 11, 2014, the anniversary of internet freedom activist Aaron Swartz‘ passing, marks a day of activism against mass National Security Agency (NSA) surveillance, dubbed “The Day We Fight Back.” 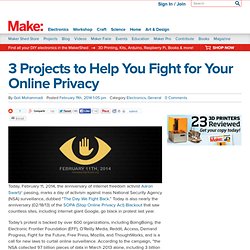 Today is also nearly the anniversary (02/18/13) of the SOPA (Stop Online Privacy Act) Blackout that saw countless sites, including internet giant Google, go black in protest last year. Today’s protest is backed by over 600 organizations, including BoingBoing, the Electronic Frontier Foundation (EFF), O’Reilly Media, Reddit, Access, Demand Progress, Fight for the Future, Free Press, Mozilla, and ThoughtWorks, and is a call for new laws to curtail online surveillance. According to the campaign, “the NSA collected 97 billion pieces of data in March 2013 alone, including 3 billion from U.S. computers” and “the NSA has built a surveillance network that has the capacity to reach roughly 75% of all U.S. internet traffic.” 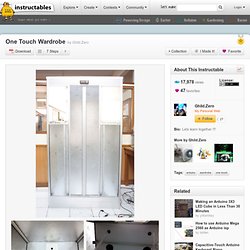 It uses a L298N chip which deliveries output current up to 2A each channel. The speed control is achieved through conventional PWM which can be obtained from Arduino’s PWM output Pin 5 and 6. The enable/disable function of the motor control is signalled by Arduino Digital Pin 4 and 7. The Motor shield can be powered directly from Arduino or from external power source. Logic Control Voltage5V (From Arduino) Motor Driven Voltage4.8^35V (From Arduino or External Power Source) Logic supply current Iss≤36mA Motor Driven current Io≤2A Maximum power consumption25WT=75 PWMPLL Speed control mode Control signal level: Top 10 DIY Projects That Cost Less Than $3.

DIY Cotton Candy Machine. The Arduino Wi-Fi Shield Makes Taking Your DIY Projects Online Simple. $2 Alarm Protects Your Stuff!! Prank Box. The prank box is basically a sealed wooden box with an electric bell inside that is activated by a key switch. Once it is turned on, a relay inside the box is latched and it cannot be turned off without knowing the secret trick (Spoiler Alert:magnets). Quite understandably, a completely sealed box with a ringing bell inside that doesn't seem to stop can quickly become maddening. Kinect-Controlled Visual Instrument. DIY Magnetic Ink. DIY Holograms – In Full Color! We love the DIY Hologram Kit that’s available in the Maker Shed. It takes the normally complicated task of holography and simplifies it into something slightly more complex than taking a Polaroid picture. The secret lies in the unique, self developing film that Litiholo (maker of the DIY Hologram Kit) created.

Super Fast Electromagnetic Flip Dot Display. ATiny-Based Web Site Hit Counter. Build a Power-Free Radio Using a Glass Bottle. Without doing the legwork, I'm pretty sure all those shows are on FM stations around where I live. Ganzfeld: Hack Your Brain the Legal Way. This instructable will show you how to achieve altered states of mind surprisingly easily with the easy to make Ganzfeld mask that is better than the traditional half ping pong balls taped to the eyes.

You can experience an altered state of mind and hallucination without drugs by simply depriving your body of sensory input. This technique is completely safe and reversible. Disarming Game. Augmented Hyper-Reality Glove. The "i have no clue what geocaching is", geocaching guide! Make custom sized solar panels. Beginning Soft Circuits. Easy DIY Animatronics. EMG Biofeedback. This biofeedback setup uses an EMG sensor to represent muscle tension as a series of beeps and allows you to train your body to adjust muscle tension at will. Hacked Gadgets - DIY Tech Blog.