Maker Camp. Google posts video highlights of I/O 2012, for those craving one last sugary fix. Hey, it's your Ninja - Ninja Phone a badge of honor at Defcon 20 (photos) Alt-week 7.28.12: social mathematics, Pluto's moons and humans-on-a-chip. Alt-week peels back the covers on some of the more curious sci-tech stories from the last seven days. 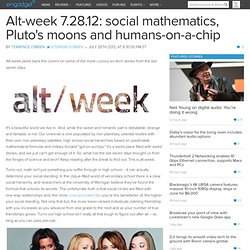 It's a beautiful world we live in. And, while the sweet and romantic part is debatable, strange and fantastic is not. Our universe is one populated by non-planetary celestial bodies with their own non-planetary satellites, high school social hierarchies based on predictable mathematical formulas and military-funded "gut-on-a-chips. " It's a weird place filled with weird stories, and we just can't get enough of it. So, what has the last seven days brought us from the fringes of science and tech? Turns out, math isn't just something you suffer through in high school -- it can actually determine your social standing. Maybe you couldn't quite figure out that whole "people" thing in high school (there's enough us on staff at Engadget -- we understand), but perhaps you could increase your social standing by making your own friends.

Comments. Defcon 20 visitors get their own 'pirate' cellular network in Ninja Tel, exclusive One V to match. HOPE for Makers – A Maker Playlist – “Hackers on Planet Earth” July 13–15, 2012 in NYC. The HOPE Number 9 conference is approaching. 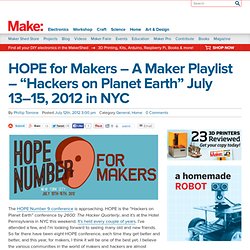 HOPE is the “Hackers on Planet Earth” conference by 2600: The Hacker Quarterly, and it’s at the Hotel Pennsylvania in NYC this weekend. It’s held every couple of years. I’ve attended a few, and I’m looking forward to seeing many old and new friends. So far there have been eight HOPE conference, each time they get better and better, and this year, for makers, I think it will be one of the best yet. I believe the various communities in the world of makers and hackers are almost completely overlapping now. 3D Printing: Making Friends in DC Before People Start Freaking Out Michael Weinberg This talk is about protecting 3D printing from industries that are not excited about disruption. Advanced Handcuff Hacking Ray Handcuffs always have been a special kind of challenge to lockpickers. Alt.Comic-Con: Strolling Artists’ Alley. On my way to the convention center. 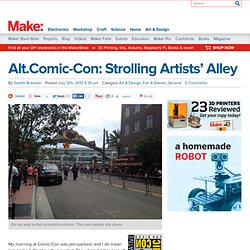 The calm before the storm. My morning at Comic-Con was jam-packed, and I do mean jam-packed. It’s absurdly crowded. The whole harbor area of San Diego is aswarm with unwashed geek masses (and the booth babes who pretend to like them). Just crossing the street is a major logistical undertaking. Maker Faire - Make Faire Bay Area 2012 May 19th & 20th. 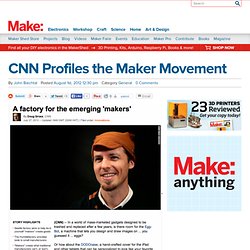 I couldn’t embed the video, but you can watch it on their site. From designing actual tools to researching the best ways to create small manufacturing businesses in urban areas, The Humblefactory is designed to spur a movement that, in itself, was spurred by modern business practices. Muren says that, even with history’s largest range of mass-produced products available on the market, they’re just that — mass produced.Consumers, he says, actually have a harder time finding products that suit their personal wants and needs.Enter the “makers.” A factory for the emerging ‘makers’ @ CNN.com Related. i3Detroit’s Mind Flame Contest. Mugbot Visits the Detroit Maker Faire. MAKE at DEFCON, Day Two. Never let it be said DEFCON attendees don’t know how to dress up. 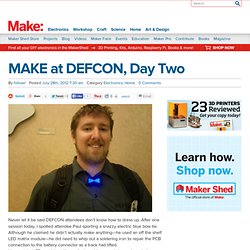 After one session today, I spotted attendee Paul sporting a snazzy electric blue bow tie. Although he claimed he didn’t actually make anything—he used an off the shelf LED matrix module—he did need to whip out a soldering iron to repair the PCB connection to the battery connector as a track had lifted. He used the LED matrix’s ability to display a bitmap and drew a bow tie image to display. Simple but effective. Physical Insecurity I’ve often found some of the most impressive sessions at DEFCON are those covering physical security—doors, locks, safes and similar products. A Visit to the Hardware Hacking Village This year the Hardware Hacking Village has a prime location just to the left of the main entry/registration area. The Brain Tank Maker and InfoSec Conference, September 15, Providence, RI.

MAKE Goes To DEFCON 20. Defcon vending room showcases tech of all ages. MAKE at DEFCON, Day Three. DEFCON is not just about using technology to create or solve problems. 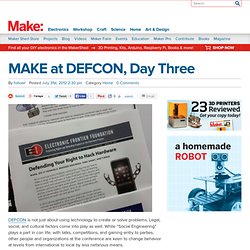 Legal, social, and cultural factors come into play as well. While “Social Engineering” plays a part in con life, with talks, competitions, and gaining entry to parties, other people and organizations at the conference are keen to change behavior at levels from international to local by less nefarious means. The Electronic Frontier Foundation has a major presence at DEFCON with a stall in the vendor area (this year, right next to the government folks), a fundraiser party event, and multiple smaller fundraising activities. I asked Mitch from the EFF to explain how the work of the EFF helps makers: Red Card, Yellow Card DEFCON has had a reputation for being an event where there have been instances of unwanted attention or harassment toward some attendees.