DIY Solar Lamp: Make Your Own Eco-Friendly Sun Jars. The principle is simple and seductively clever: solar lights that store energy during the day and release light at night. 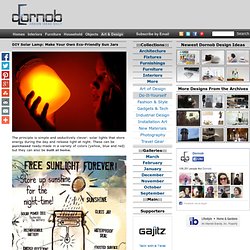 These can be purchased ready-made in a variety of colors (yellow, blue and red) but they can also be built at home. A simple, less-technical approach involves buying a conventional solar-powered yard lamp and then essentially harvesting it for key pieces to put in a jar. This is simply a way of taking an existing solar lamp design and appropriating its parts to make something more attractive for display around a house or home. A more electronically-savvy individual can take the more complex route and built a solar lamp from the ground up using small solar panels – though the aesthetic result may not be as impressive. Whatever route you choose to go, these are fun and sustainable gadgets that make it easy to go green, automate the process of turning on lights at night and can add some color to your porch, patio, garden or windowsill. 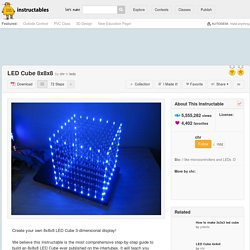 However, we are dealing with digital electronics here, so everything is either on or off! I've been doing electronics for a long time, and for years i struggled with analog circuits. The analog circuits failed over half the time even if i followed instructions. One resistor or capacitor with a slightly wrong value, and the circuit doesn't work. About 4 years ago, I decided to give microcontrollers a try. A digital circuit doesn't care if a resistor is 1k ohm or 2k ohm, as long as it can distinguish high from low. Steampunk modified IKEA-Lamp for camping. EL wire Steam Burton bonsai (steampunk) All You Need to Know About LEDs. IMAGES: LEDs. 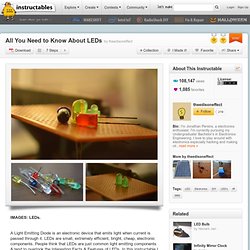 A Light Emitting Diode is an electronic device that emits light when current is passed through it. LEDs are small, extremely efficient, bright, cheap, electronic components. People think that LEDs are just common light emitting components & tend to overlook the Interesting Facts & Features of LEDs. In this instructable I will teach you 'All You Need to Know About LEDs' which includes their Working, Current and Power Ratings, Builds, Types, Resistor Calculator for LEDs, Uses, Testing & a Simple LED circuit. Here's a Link to the 'LED Resistor Calculator' free android app: LED Resistor Calculator . History Of The LED Captain Henry Joseph Round was one of the early pioneers of radio and received 117 patents. Lighted Newton's Cradle. Touch Activated Finger Led (Glove Optional)

DIY Remote Light Switch. Sunrise simulator « Electro Bob. How to make a neon light. LED light painting: Geeks creating works of art through tech – New Tech Gadgets & Electronic Devices. No matter if you’re part of the art or geek scene, light painting has become a recent trend blending the two. The medium has evolved to something more than just waving flashlights in front of a camera with a long exposure. It requires an understanding of photography as well as the hardware and software that make these projects possible. The trend of using a “light wand,” or and LED RGB light strip, began with a group of artists that wanted to map urban WiFi signals . This project created a visual landscape of technology we couldn’t see before, giving perspective on something we use everyday. After the release of art group’s video, it branched out into something else entirely—geeks and artists alike were creating floating pixelated images. The LightScythe project was one of the first to be directly influenced by the art initiative.

LightScythe - The Mechatronics Guy. Battery power is provided from a 6V SLA battery, which is able to power the strip directly without regulation. 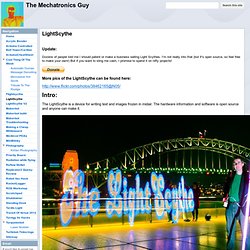 Parts list (Per scythe): Software: Arduino code: The arduino code is quite simple. The software parses input from the serial port (Xbee) and writes it to the staff. The use of the ‘M’ allows for easy synchronisation with the start of the colum, as well as allowing future codes using other letters. Arduino News, Videos, Reviews and Gossip - Lifehacker. Virtual Lighting Studio. The ambient light represents the light coming from the studio environment. 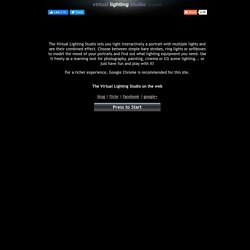 You can turn it on or off and change its color and intensity. If you're lost and need some help, click here. But you probably know that... Click on any help text to hide this. This is a schematic view of the studio. These are all the available models for lighting. These slots are used to capture your light setups. You can save a picture of your capture on your device by using the "Save As... " command of your browser on the capture thumbnails. This button is used to share or bookmark your current settings. This is the main view which displays your lit subject as seen through your camera. The garbage is used to clear your captured light setups. Lunchbox Laser Shows.

Open Source Coolarity Wayne and I have made 5 boxen so far: 2 Lumias (red and red-and-green), a Diffracterator (green), and 2 Motiondizers (violet and green). 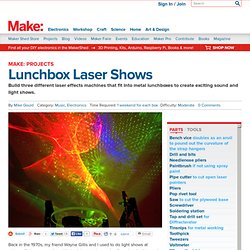 And as for Penguicon, things worked very well. The DJ at the dance party wanted to buy a Diffracterator on the spot. I Sing the Lunchbox Electric. Not your ordinary LED book light. DIY LED Glass Wall. BlinkM is a smart LED that displays various shades of light effects by fading or changing color. 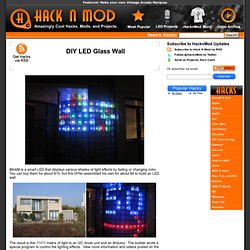 You can buy them for about $15, but this DIYer assembled his own for about $4 to build an LED wall. The result is this 11×11 matrix of light to an I2C driver unit and an Arduino. The builder wrote a special program to control the lighting effects. View more information and videos posted on the project site. Popular LED Projects: *** LED Cube 3x3x3 *** [with case and 22 animations / effects]