How to Load Up Your Ereader with Ebooks For Free. The new kindle local library lending is great if you have a great local library system like NYC, where I am sure they have tens of thousands of titles, but here in the Miami, FL system the pickings are pretty slim with only a few thousand of mostly older titles. 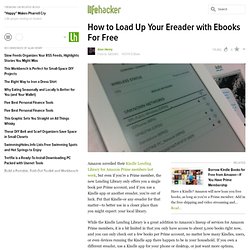 Some libraries allow a paid membership even if you live out of town for about $100. Another great source for cheap ($2 or less) or free ebooks is Amazon itself. Every day they change which books are available for reduced prices, and it is usually hundreds of books on a given week. Another source are authors websites. Several authors give away ebooks of their early work to get more buyers of their more recent catalog. Score Free Audiobooks from Audible with a Simple Google Search. 1DollarScan Scans And Digitizes Your Books For You “For A Dollar” Having old media digitized to get more space in the house, preserve them or simply make them portable isn’t exactly a new trend. 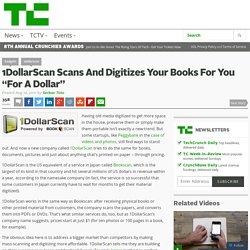 But some startups, like Peggybank in the case of videos and photos, still find ways to stand out. And now a new company called 1DollarScan tries to do the same for books, documents, pictures and just about anything that’s printed on paper – through pricing. 1DollarScan is the US equivalent of a service in Japan called Bookscan, which is the largest of its kind in that country and hit several millions of US dollars in revenue within a year, according to the namesake company (in fact, the service is so successful that some customers in Japan currently have to wait for months to get their material digitized). 1DollarScan works in the same way as Bookscan: after receiving physical books or other printed material from customers, the company scans the papers, and converts them into PDFs or DVDs.

How To Properly Import Instapaper and Readability Articles to Your Kindle. Instapaper's "Read Later" bookmarklet serves a novel purpose in the Internet age: it gives us the opportunity to be better readers. 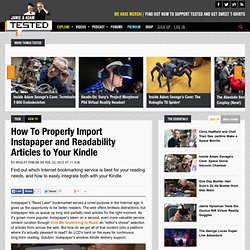 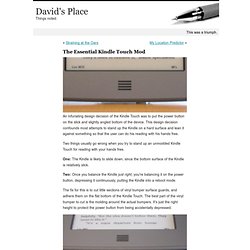 This design decision confounds most attempts to stand up the Kindle on a hard surface and lean it against something so that the user can do his reading with his hands free. Two things usually go wrong when you try to stand up an unmodded Kindle Touch for reading with your hands free. One: The Kindle is likely to slide down, since the bottom surface of the Kindle is relatively slick. Two: Once you balance the Kindle just right, you're balancing it on the power button, depressing it continuously, putting the Kindle into a reboot mode. The fix for this is to cut little sections of vinyl bumper surface guards, and adhere them on the flat bottom of the Kindle Touch. Even better, the vinyl has a high coefficient of friction, so the Kindle Touch won't slide down when you try to stand it up anymore. How to Make Reading on Your Computer a Better Experience. Kindle News, Videos, Reviews and Gossip - Lifehacker. How to convert PDF to ePUB/mobi for your eReader/Kindle.

(Note: The Language Hacking Guide has been converted to be read on all devices, using the techniques in this post.) 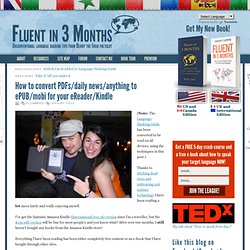 Thanks to ditching dead trees and embracing 21st century technology I have been reading a lot more lately and really enjoying myself. I’ve got the fantastic Amazon Kindle (International free 3G version since I’m a traveller, but the $139 wifi version will be fine for most people), and you know what? After over two months, I still haven’t bought any books from the Amazon Kindle store! Kindle News, Videos, Reviews and Gossip - Lifehacker. At Last, They See: E-Books 'Democratize' Publishing. Hide captionThe Cat In The Hat makes an appearance at a party during the Tools of Change 2012 conference in New York last week. 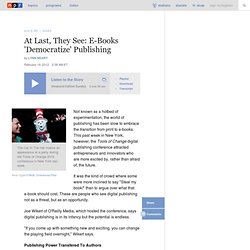 Pinar Ozger/O'Reilly Conferences/Flickr Not known as a hotbed of experimentation, the world of publishing has been slow to embrace the transition from print to e-books. This past week in New York, however, the Tools of Change digital publishing conference attracted entrepreneurs and innovators who are more excited by, rather than afraid of, the future. It was the kind of crowd where some were more inclined to say "Steal my book! " than to argue over what that e-book should cost. Joe Wikert of O'Reilly Media, which hosted the conference, says digital publishing is in its infancy but the potential is endless.

Kindle News, Videos, Reviews and Gossip - Lifehacker. Jailbreak has turned into a throwaway term that is easily understandable. 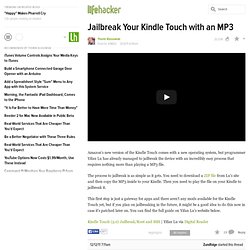 People also say "Jailbreak your Android", when it's supposed to be root, but it doesn't matter. If you go to a person and say "root your android to do X", 9 times out of 10 they'll be like "what the hell does that mean? "; but if you say "jailbreak your android to do X" they know exactly what you're talking about. Sure, "Just because they understand it better, doesn't mean it's not wrong. " but when talking about language, it DOES mean it's not wrong. The idea of language is a way to communicate to another person in a way that makes sense to /them/, not /you/. Jailbreaking is actually the correct term here. Definition: a jargon expression for (the act of) overcoming limitations in a computer system or device that were deliberately placed there for security, administrative, or marketing reasons [en.wikipedia.org]