What You Can Say Instead of “I Don’t Feel Like It” By Leo Babauta Too often we let ourselves be ruled by our moods — which leads to procrastination, a lack of exercise, eating poorly, constant online distractions, and more. 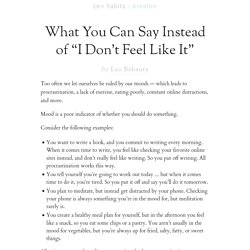 Mood is a poor indicator of whether you should do something. Consider the following examples: Free Personality Test. Members Login Log in to your account below: Enter your e-mail address to receive a reset link. 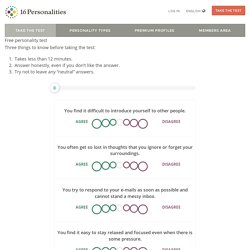 Forgot password? Not a member yet? Take our personality test and join in the results screen! Free personality test Takes less than 12 minutes. Answer honestly, even if you don’t like the answer. Try not to leave any “neutral” answers. Three things to know before taking the test: Takes less than 12 minutes. You find it difficult to introduce yourself to other people. Agree Disagree You often get so lost in thoughts that you ignore or forget your surroundings. You try to respond to your e-mails as soon as possible and cannot stand a messy inbox. You find it easy to stay relaxed and focused even when there is some pressure. You do not usually initiate conversations. You rarely do something just out of sheer curiosity. You feel superior to other people. Being organized is more important to you than being adaptable. You are usually highly motivated and energetic.

Your home and work environments are quite tidy. Shares. INFJ Personality (“The Advocate”) The INFJ personality type is very rare, making up less than one percent of the population, but they nonetheless leave their mark on the world. 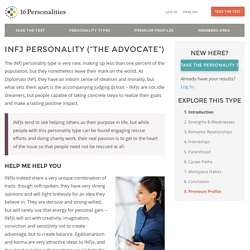 As Diplomats (NF), they have an inborn sense of idealism and morality, but what sets them apart is the accompanying Judging (J) trait – INFJs are not idle dreamers, but people capable of taking concrete steps to realize their goals and make a lasting positive impact. INFJs tend to see helping others as their purpose in life, but while people with this personality type can be found engaging rescue efforts and doing charity work, their real passion is to get to the heart of the issue so that people need not be rescued at all. Help Me Help You INFJs indeed share a very unique combination of traits: though soft-spoken, they have very strong opinions and will fight tirelessly for an idea they believe in. Every man must decide whether he will walk in the light of creative altruism or in the darkness of destructive selfishness.

INFJ strengths and weaknesses. INFJ relationships. When it comes to romantic relationships, INFJs take the process of finding a partner seriously. 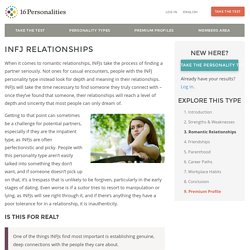 Not ones for casual encounters, people with the INFJ personality type instead look for depth and meaning in their relationships. INFJs will take the time necessary to find someone they truly connect with – once they’ve found that someone, their relationships will reach a level of depth and sincerity that most people can only dream of. Getting to that point can sometimes be a challenge for potential partners, especially if they are the impatient type, as INFJs are often perfectionistic and picky. People with this personality type aren’t easily talked into something they don’t want, and if someone doesn’t pick up on that, it’s a trespass that is unlikely to be forgiven, particularly in the early stages of dating. Is This For Real? One of the things INFJs find most important is establishing genuine, deep connections with the people they care about. Comments. INFJ Friends.

There is a running theme with INFJs, and that is a yearning for authenticity and sincerity – in their activities, their romantic relationships, and their friendships. 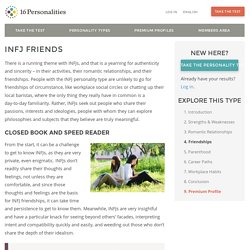 People with the INFJ personality type are unlikely to go for friendships of circumstance, like workplace social circles or chatting up their local baristas, where the only thing they really have in common is a day-to-day familiarity. INFJ Parents. INFJ Careers. INFJs are likely to find that most corporate career paths are not designed for them, but for those focused on status and material gain. 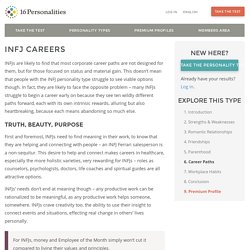 This doesn’t mean that people with the INFJ personality type struggle to see viable options though. In fact, they are likely to face the opposite problem – many INFJs struggle to begin a career early on because they see ten wildly different paths forward, each with its own intrinsic rewards, alluring but also heartbreaking, because each means abandoning so much else. INFJ in the Workplace. INFJs have pretty tall demands when it comes to a satisfying work environment. 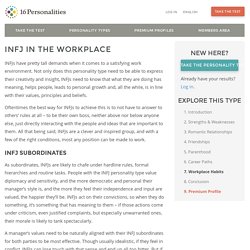 INFJ Personality - Conclusion. Few personality types are as sensitive and mysterious as INFJs. 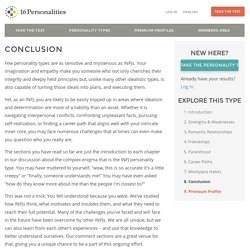 Your imagination and empathy make you someone who not only cherishes their integrity and deeply held principles but, unlike many other idealistic types, is also capable of turning those ideals into plans, and executing them. Yet, as an INFJ, you are likely to be easily tripped up in areas where idealism and determination are more of a liability than an asset. Whether it is navigating interpersonal conflicts, confronting unpleasant facts, pursuing self-realization, or finding a career path that aligns well with your intricate inner core, you may face numerous challenges that at times can even make you question who you really are.