I have recently been introduced to podcasts and these are some that have either been recommended or I would like to try out soon.

Nightmare Magazine - Horror and Dark Fantasy Story Podcast (Audiobook. 100 Best Radio Podcasts for 2014. Video Podcast Network. Top Ranking Podcasts in Comedy at podbay.fm. POPSUGAR Entertainment. If you're among the many listeners who became obsessed with Serial, we can relate. 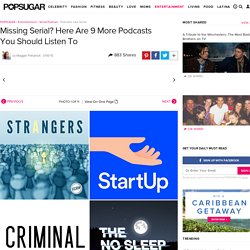 The spoof-worthy true-crime podcast ended a couple months ago, and we're left with only questions. While this might actually be great for subject Adnan Syed, who was recently granted an appeal, we all still have to wait a while for the second season. 9 Great Spanish Podcasts Every Spanish Learner Should Listen To. So many Spanish podcasts, so little time! 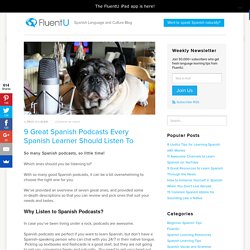 Which ones should you be listening to? With so many good Spanish podcasts, it can be a bit overwhelming to choose the right one for you. We’ve provided an overview of seven great ones, and provided some in-depth descriptions so that you can review and pick ones that suit your needs and tastes. The Ridiculously Long List Of Best Podcasts You Need To Start Listening To Right Now. With the viral success of “Serial,” I think it’s safe to say podcasts are a thing. 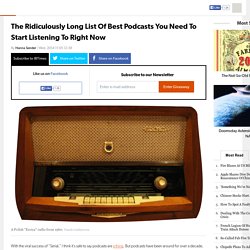 But podcasts have been around for over a decade, so why are they becoming so popular now? The short answer: Podcasts have gotten really good lately. While the most popular shows on iTunes -- "This American Life," "Radiolab," "Fresh Air" -- are still produced by radio stations, new networks like Maximum Fun, Smodcast, Feral Audio and Radiotopia are stepping up their game. As a longtime podcast fan, I'm beyond excited that “Serial” is doing so well. 21 Podcasts For Every Personality. BBC Podcasts. 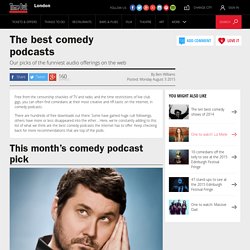 Doug Benson. A laidback, stoner comic from San Diego. Ever seen that marijuana doc ‘Super High Me’? He’s that guy. And he loves movies? Listen to the Best Podcasts & Shows Online, Free. You should be listening to all these podcasts. If you currently have a username with "@" in it, please email support@voxmedia.com. 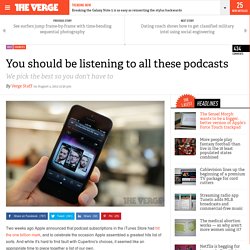 Forgot password? We'll email you a reset link. If you signed up using a 3rd party account like Facebook or Twitter, please login with it instead. Top Podcasts 2015. 21 Essential Podcasts To Download Today. 1 | Sodajerker On Songwriting One thing you learn from podcasts is that, freed from a cramped radio slot and faced with someone who actually knows a bit about their subject, almost everyone has a fascinating story to tell. 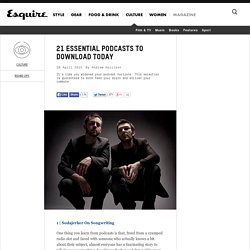 Scouse songwriting duo Simon Barber and Brian O'Connor set up Sodajerker just as an excuse to talk to their heroes about what it's like to put songs together. But their natural inquisitiveness brings out the best in legends including Andy Partridge of XTC, Mike Stoller and Johnny Marr, making Sodajerker one of the most unusual and rewarding music podcasts. 2 | Stuff You Should Know There is, let's face it, a hell of a lot of stuff that we should know about but don't. 3 | Real Time With Bill Maher This one, meanwhile, is Have I Got News For You with a metric shitload more swearing plus a little more bite and viciousness than "Gosh, isn't Ed Miliband's voice funny? 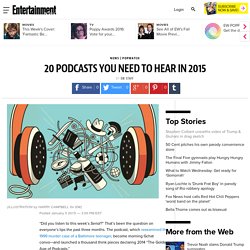 That’s been the question on everyone’s lips the past three months. The podcast, which reexamined the 1999 murder case of a Baltimore teenager, become morning Gchat convo—and launched a thousand think pieces declaring 2014 “The Golden Age of Podcasts.” While individual podcasts have previously broken through the cultural consciousness—like comedian Marc Maron’s WTF in 2009—the genre has generally been a niche interest since it hit iTunes in 2005. That year, there were only about 3,000 podcasts up and running. A decade later, that number has mushroomed to more than 285,000 podcasts, created in over 100 languages. To celebrate the format’s true coming of age—it is indeed “golden”—our very own obsessive pod people are telling you what you must hear in the new year. Hardcore History Jump into Dan Carlin’s history-made-real series with episode 50, the first of many devoted to World War I. Rollingstone. Ricky Gervais is the voice that launched a thousand comedy podcasts. 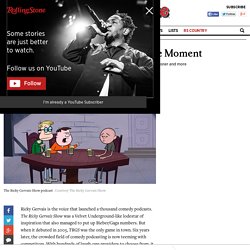 The Ricky Gervais Show was a Velvet Underground-like lodestar of inspiration that also managed to put up Bieber/Gaga numbers. But when it debuted in 2005, TRGS was the only game in town. Six years later, the crowded field of comedy podcasting is now teeming with competitors. Free audio podcasts to download from Earwolf. Podcast Directory. The LearnOutLoud.com Podcast Directory offers over 2000 audio & video podcasts you can learn from. 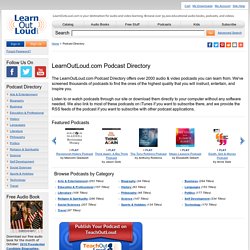 We've screened thousands of podcasts to find the ones of the highest quality that you will instruct, entertain, and inspire you. Listen to or watch podcasts through our site or download them directly to your computer without any software needed. We also link to most of these podcasts on iTunes if you want to subscribe there, and we provide the RSS feeds of the podcast if you want to subscribe with other podcast applications. Sort by Titles Per Page 1 - 10 of 1862 Titles by Dan LeBatard Audio from The Dan LeBatard Show heard M-F 3pm-7pm ET on 790 The Ticket - Miami, FL. By T.D. The Potter's Touch, a weekly program, with Bishop T.D. By Mark R. Mark Levin has become one of the hottest properties in Talk radio, his top-rated show on WABC New York is now syndicated nationally by ABC Radio Networks. PublicRadioFan.com - Podcast directory.

The Podcast Resurgence: Your Definitive Listening Guide. SOME OF YOU might have no idea what a podcast is. 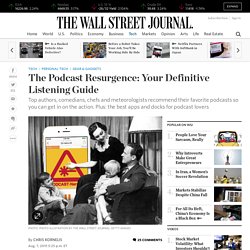 Some of you may have listened to them back in 2005, when they were declared the future of radio, and then stopped in 2008, when they clearly weren’t the future of radio. Podcasts. Podcasts. Invisibilia by NPR. BuzzFeed's Internet Explorer by BuzzFeed. Another Round by BuzzFeed. iTunes - Podcasts - Discovering Podcasts. Everything You Need to Know About Listening to Podcasts, My Favorite Free Form of Entertainment. Radiolab hosts Jad Abumrad (right) and Robert Krulwich explore scientific curiosities with a sense of humor. Photo: WNYC I spend the equivalent of a full-time job working at my computer or laptop, and that’s usually with audio turned on. On top of that, I have my cell phone almost everywhere with me and when I’m in the car; I usually plug it in and listen to the audio through my car’s speaker system.