Seattle Seahawks Eddie Lacy opens up about his public struggle with weight. This story appears in ESPN The Magazine's Oct. 2 MLB Playoffs issue. 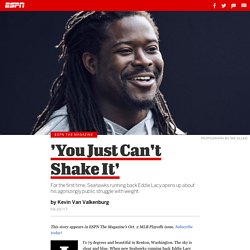 Subscribe today! It's 75 degrees and beautiful in Renton, Washington. The sky is clear and blue. When new Seahawks running back Eddie Lacy climbs out of his Corvette and waves to me in a park near his condo, I notice he's brought a towel. It's a small towel, tan and about the size of a dishrag. Eventually he explains that he gets nervous when he does interviews, and he sweats when he gets nervous.

Lacy had to think long and hard before agreeing to meet up and talk like this. "I could pull up my Twitter right now and there would be a fat comment in there somewhere," he says. When the internet turns one of your most personal flaws into a meme, how the hell do you possibly escape it? Ever since his weight became a public topic during his four years in Green Bay -- which included two 1,100-yard seasons -- Lacy had read those kinds of comments and brooded in silence, convinced he couldn't win. Except they didn't fade. 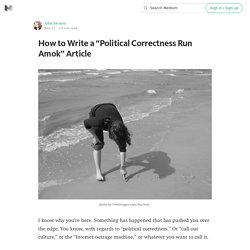 Something has happened that has pushed you over the edge. You know, with regards to “political correctness.” Or “call-out culture,” or the “Internet outrage machine,” or whatever you want to call it. It’s been a lot of little things up until now — you know, comments that you’ve seen on social media, or protests that you’ve heard about, all condemning people for supposedly “bad” things they may have said or done. And now you are the one who is outraged! And here is how you will do it: 1) Make it clear from the very beginning that you are an open-minded, social justice supporter, preferably on the left side of the political spectrum. 2) Repeatedly remind readers (through both blatant and subtle appeals) that Free Speech = Good; Censorship = Bad. 3) This can’t just be any Person of Stature, or any old comments or actions against a minority group. 4) Pick an overarching theme: There are two obvious paths here.

The Toxoplasma Of Rage. “Nobody makes an IRC channel for no reason. 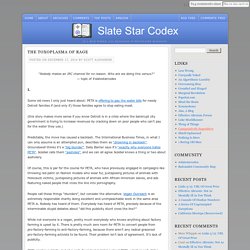 Who are we doing this versus?” — topic of #slatestarcodex Some old news I only just heard about: PETA is offering to pay the water bills for needy Detroit families if (and only if) those families agree to stop eating meat. (this story makes more sense if you know Detroit is in a crisis where the bankrupt city government is trying to increase revenues by cracking down on poor people who can’t pay for the water they use.)

Predictably, the move has caused a backlash. Of course, this is par for the course for PETA, who have previously engaged in campaigns like throwing red paint on fashion models who wear fur, juxtaposing pictures of animals with Holocaust victims, juxtaposing pictures of animals with African-American slaves, and ads featuring naked people that cross the line into pornography. People call these things “blunders”, but consider the alternative. PETA creates publicity, but at a cost.

Is Social Media to Blame for the Increase of Graphic Images in Media? Editor’s Note: Be warned that there is a graphic image used in the story to illustrate the way people spread shocking images on Twitter. 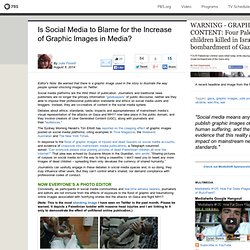 Debates about ethics, standards, taste, impacts and appropriateness of mainstream media’s visual representation of the attacks on Gaza and MH17 now take place in the public domain, and they involve creators of User Generated Content (UGC), along with journalists and their ”audiences.” The Sydney Morning Herald’s Tim Elliott has reported on the creeping effect of graphic images posted on social media platforms, citing examples in Time Magazine, the Weekend Australian and The New York Times. Why You Should Leave Facebook And How To Actually Do It, According To Artist Nick Briz. Nick Briz is a Chicago-based new media artist, educator, and organizer. 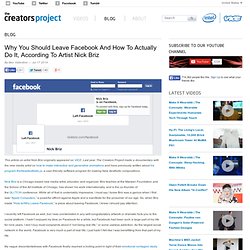 Briz teaches at the Marwen Foundation and the School of the Art Institute of Chicago, has shown his work internationally, and is the co-founder of the GLI.TC/H conference. While all of that is undeniably impressive, I must say I knew Briz was a genius when I first saw “Apple Computers,” a powerful affront against Apple and a manifesto for the prosumer of our age.

So, when Briz made “How to/Why Leave Facebook,” a piece about leaving Facebook, I knew I should pay attention. I recently left Facebook as well, but I was uninterested in any self-congratulatory artwork or dramatic fuck-you to the social platform. Negations: Capitalism and Schizophrenia. BuzzFeed’s Jonah Peretti Goes Long — Matter. Back to Top Felix: You’re about to become a publishing person and join the Huffington Post. 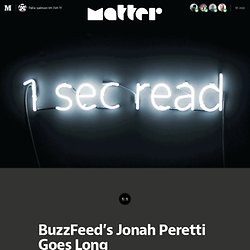 Tell me the one about how Kenny finds you living out of a cardboard box under a bridge somewhere and says, “I want you to co-found a company with me.” What’s the story there? Jonah: Kenny was doing some political projects, political work. He called together a group of luminaries who knew all about the Internet to help him with his political projects. "There was a time, I am told, when exes lived in... - Annelise's Notebooks. I wonder how technology will change love songs.... - Annelise's Notebooks. IDEA: Export social network data, make thing. Using real sext message threads as short film scripts.