La Tomatina - Wikipedia. La Tomatina (Spanish pronunciation: [la tomaˈtina]) is a festival that is held in the Valencian town of Buñol, a town located in the East of Spain 30 km / 19 miles from the Mediterranean, in which participants throw tomatoes and get involved in this tomato fight purely for entertainment purposes. 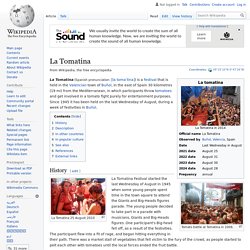 Since 1945 it has been held on the last Wednesday of August, during the week of festivities of Buñol. History[edit] The tomato fight (or La Tomatina) has been a strong tradition in Buñol since 1944 or 1945.[1] No one is completely certain how this event originated, but there is one popular theory that disgruntled townspeople rioted and attacked city councilmen with tomatoes during a town celebration. [citation needed] Whatever did happen to begin the tradition, it was enjoyed so much that it was repeated the next year, and the year after that, and so on. Hotel Barceló Valencia - Hotel 4 Estrellas en Valencia. EMT: Municipal Transport Company of Valencia. 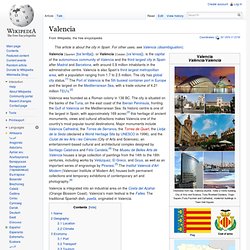 Valencia's main festival is the Falles. The traditional Spanish dish, paella, originated in Valencia. Name[edit] The original Latin name of the city was Valentia (Latin pronunciation: [waˈlentia]), meaning "strength", or "valour", the city being named according to the Roman practice of recognizing the valour of former Roman soldiers after a war. The Roman historian Livy explains that the founding of Valentia in the 2nd century BC was due to the settling of the Roman soldiers who fought against an Iberian rebel, Viriato. During the rule of the Muslim kingdoms in Spain, it had the nickname Medina bu-Tarab ('City of Joy') according to a transliteration, or Medina at-Turab (مدينة التراب, 'City of Sands') according to another, since it was located on the banks of the River Turia.

Geography[edit] Location[edit] Climate[edit] Economy[edit] Commercial zone. Valencia. Valencia city hall The river Turia ran through the center of the city, but it was redirected a while back and replaced by a beautiful park. 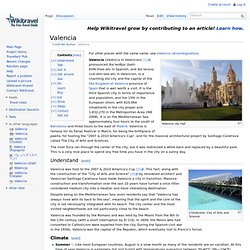 This is a very nice place to spend any free time you have in the city on a sunny day. Understand[edit] L'Umbracle, City of Arts and Science Valencia was host to the 2007 & 2010 America's Cup [2]. Despite being on the Mediterranean Sea, even residents say that "Valencia has always lived with its back to the sea", meaning that the spirit and the core of the city is not necessarily integrated with its beach. Valencia was founded by the Romans and was held by the Moors from the 8th to the 13th century (with a short interruption by El Cid).

Climate[edit] Summer — Like most European countries, August is a slow month as many of the residents are on vacation. Talk[edit] Valencia's official languages are Valencian/Catalan, and Spanish. Weekend in Valencia: a complete itinerary. Valencia might just be the perfect weekend destination: historic centre; a unique arts and science complex; sandy beach; lots of green space; fantastic food; and a great climate. 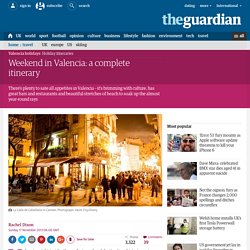 Spain's third city was established by the Romans, occupied by Muslims, and won for Aragon in 1238, when its influence grew until it was one of the most important Mediterranean cities of the 15th century. These days, it attracts nearly 2 million international visitors per year (about 80,000 from the UK). Many come for the extraordinary Las Fallas in March, a wild five-day fiesta in honour of San José, when hundreds of giant puppets are paraded and set on fire. But it is a party town all-year round – and if you miss Las Fallas, you can always visit the Museo Fallero to see the ninots (figurines) that have survived the flames. 9.30pm Head out to bar-hop and eat tapas in the Ciutat Vella (old town). 10am. NYTimes Valencia Travel Guide. Valencia Travel Guide - Hotels, Restaurants, Sightseeing in Valencia - New York Times Travel.