Theories of acids and bases. In fact, the reaction between HCl and water is reversible, but only to a very minor extent. 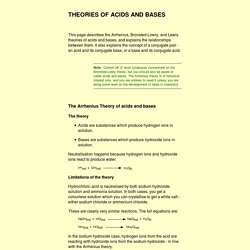 In order to generalise, consider an acid HA, and think of the reaction as being reversible. Strong and weak acids. When an acid dissolves in water, a proton (hydrogen ion) is transferred to a water molecule to produce a hydroxonium ion and a negative ion depending on what acid you are starting from. 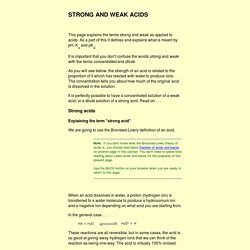 In the general case . . . These reactions are all reversible, but in some cases, the acid is so good at giving away hydrogen ions that we can think of the reaction as being one-way. The acid is virtually 100% ionised. For example, when hydrogen chloride dissolves in water to make hydrochloric acid, so little of the reverse reaction happens that we can write: At any one time, virtually 100% of the hydrogen chloride will have reacted to produce hydroxonium ions and chloride ions. Calculating molarity, molar concentration of solutions how to determine solubility practice questions gcse chemistry Calculations 11. igcse KS4 science A level GCE AS A2 O Level practice questions exercises. 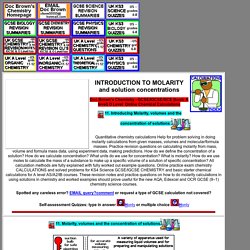 Molarity, volumes and the concentration of solutions Appendix on How to make up a standard solution is on a separate page See also 14.3 dilution of solutions calculations Revise section 7. moles and mass before proceeding in this section 11 and eventually you may need to be familiar with the use of the apparatus illustrated above, some of which give great accuracy when dealing with solutions and some do not. It is very useful to be know exactly how much of a dissolved substance is present in a solution of particular concentration or volume of a solution. There are more questions involving molarity in section 12. on titrations and section 14.3 on dilution calculations and APPENDIX on SOLUBILITY How do you find out how soluble a substance is in water?

Reminder: solute + solvent ==> solution. Understanding the names of organic compounds. If you had to name this yourself: How do you know what order to write the different alkyl groups at the beginning of the name? 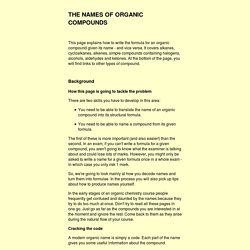 The convention is that you write them in alphabetical order - hence ethyl comes before methyl which in turn comes before propyl. The cycloalkanes In a cycloalkane the carbon atoms are joined up in a ring - hence cyclo. Example: Write the structural formula for cyclohexane. hexan shows 6 carbons with no carbon-carbon double bonds. cyclo shows that they are in a ring. Alkanes and cycloalkanes with chlorine or bromine. The reaction between alkanes and fluorine This reaction is explosive even in the cold and dark, and you tend to get carbon and hydrogen fluoride produced. 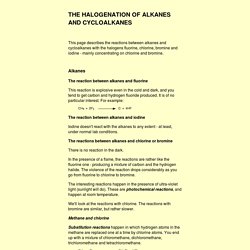 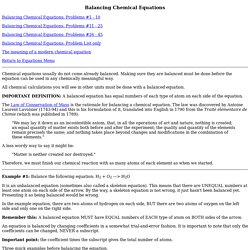 Introduction to Time-of-Flight Mass Spectrometry. Mass spectrometry A mass spectrometer is simply a device designed to determine the mass of individual atoms or molecules. 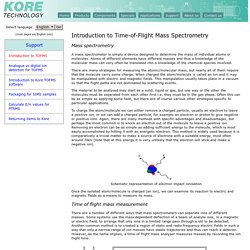 Atoms of different elements have different masses and thus a knowledge of the molecular mass can very often be translated into a knowledge of the chemical species involved. There are many strategies for measuring the atomic/molecular mass, but nearly all of them require that the molecule carry some charge. When charged the atom/molecule is called an ion and it may be manipulated with electric and magnetic fields. This manipulation usually takes place in a vacuum so that the flight paths are not dominated by scattering events. The material to be analysed may start as a solid, liquid or gas, but one way or the other the molecules must be separated from each other first i.e. they must be in the gas phase. Schematic representation of electron impact ionisation. Redox Reactions: Crash Course Chemistry #10. Rules for Assigning Oxidation Numbers to Elements - dummies. 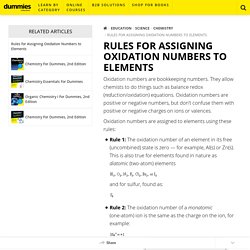 They allow chemists to do things such as balance redox (reduction/oxidation) equations. Oxidation numbers are positive or negative numbers, but don’t confuse them with positive or negative charges on ions or valences. Oxidation numbers are assigned to elements using these rules: Rule 1: The oxidation number of an element in its free (uncombined) state is zero — for example, Al(s) or Zn(s). Electronic structures of ions. Working out the electronic structures of ions Ions are atoms (or groups of atoms) which carry an electric charge because they have either gained or lost one or more electrons. 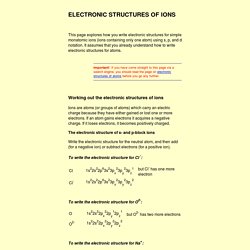 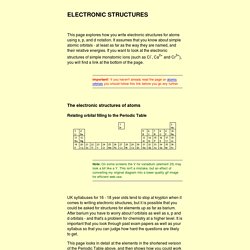 There are two ways around this, and you must be familiar with both. Shortcut 1: All the various p electrons can be lumped together. For example, fluorine could be written as 1s22s22p5, and neon as 1s22s22p6. Atomic orbitals. A 1s orbital holding 2 electrons would be drawn as shown on the right, but it can be written even more quickly as 1s2. This is read as "one s two" - not as "one s squared". You mustn't confuse the two numbers in this notation: The order of filling orbitals - the Aufbau Principle Aufbau is a German word meaning building up or construction.

We imagine that as you go from one atom to the next in the Periodic Table, you can work out the electronic structure of the next atom by fitting an extra electron into the next available orbital. Electrons fill low energy orbitals (closer to the nucleus) before they fill higher energy ones. Orbitals: Crash Course Chemistry #25.