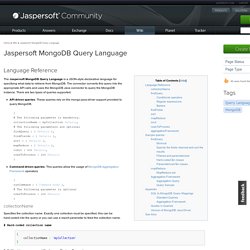 The connector converts this query into the appropriate API calls and uses the MongoDB Java connector to query the MongoDB instance. There are two types of queries supported: Mikeaddison93/mongo-express · GitHub. License of mongobird. Extended JSON. HypergraphDB - A Graph Database. Using MongoDB as a Graph Database - engineering.talis.com. This is a presentation I gave to the NoSQL and Big Data Birmingham meetup group a couple of weeks back, and actually it’s a redux of a presentation I gave a couple of years ago at MongoDB UK. 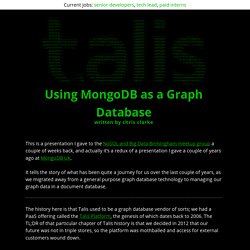 It tells the story of what has been quite a journey for us over the last couple of years, as we migrated away from a general purpose graph database technology to managing our graph data in a document database. The history here is that Talis used to be a graph database vendor of sorts; we had a PaaS offering called the Talis Platform, the genesis of which dates back to 2006. The TL;DR of that particular chapter of Talis history is that we decided in 2012 that our future was not in triple stores, so the platform was mothballed and access for external customers wound down.

However, the platform, and graph data, formed the architectural cornerstone of our growing EdTech business and its products. With the platform now EoL, we had some decisions to make about how to move forward with these products. Python MongoDB Drivers. This is an overview of the available tools for using Python with MongoDB. 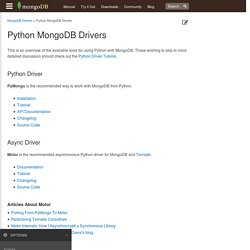 Those wishing to skip to more detailed discussion should check out the Python Driver Tutorial. Python Tools ORM Like Layers Because MongoDB is so easy to use the basic Python driver is often the best solution for many applications. However, if you need data validation, associations and other high-level data modeling functionality then ORM like layers may be desired. Sparksee high-performance graph database. Evaluation license Evaluate Sparksee for free downloading the evaluation version right now. 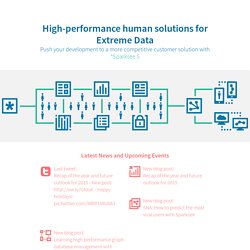 The evaluation license provided has the following configuration: XSMALL size (up to 1M objects) / 1 session / DEXHA disabled If you need a bigger configuration consider the rest of license options. Free License! Required information will be only used to manage the download of the software and to provide promotional news in the future, but it will never be public or distributed to third parties. Sparsity Technologies encourages research with Sparksee by offering free licenses to PhD students, academics and other university staff, for non-commercial purposes. Sparsity Technologies encourages the use of Sparksee by offering free licenses to selected companies during their development stages. Mikeaddison93/blueprints. Jena (framework) SPARQL. SPARQL (pronounced "sparkle", a recursive acronym for SPARQL Protocol and RDF Query Language) is an RDF query language, that is, a semantic query language for databases, able to retrieve and manipulate data stored in Resource Description Framework format.[2][3] It was made a standard by the RDF Data Access Working Group (DAWG) of the World Wide Web Consortium, and is recognized as one of the key technologies of the semantic web. 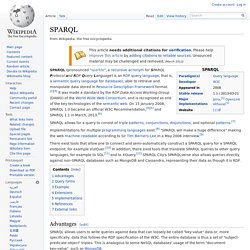 On 15 January 2008, SPARQL 1.0 became an official W3C Recommendation,[4][5] and SPARQL 1.1 in March, 2013.[6] SPARQL allows for a query to consist of triple patterns, conjunctions, disjunctions, and optional patterns.[7] D3 Tutorial Table of Contents. 12 Devs of Xmas. I’d like to start off by asking what seems like quite a simple question: What is the difference between data and information? 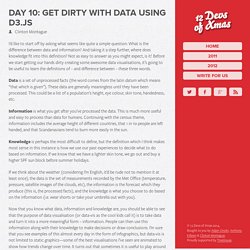 And taking it a step further, where does knowledge fit into this definition? Not as easy to answer as you might expect, is it! Before we start getting our hands dirty creating some awesome data visualisations, it’s going to be useful to learn the definitions of – and difference between – these three words. Data is a set of unprocessed facts (the word comes from the latin datum which means “that which is given”). D3.js - Data-Driven Documents. Integrating AllegroGraph with MongoDB. Introduction. 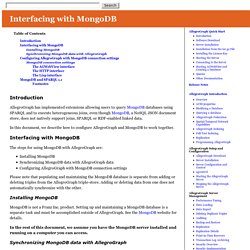 Mikeaddison93/mongo-tools. Visualizing MongoDB Objects in Concept and Practice. Architecture and Planning. I have not been shy in my love of MongoDB. 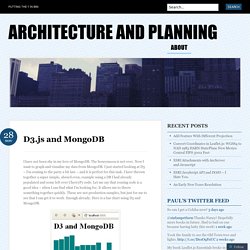 The honeymoon is not over. Now I want to graph and visualize my data from MongoDB. I just started looking at D3 – I’m coming to the party a bit late – and it is perfect for this task. I have thrown together a super simple, absurd even, example using a DB I had already populated and some left over CherryPy code. Let me say that reusing code is a good idea – when I can find what I’m looking for.

A Bar Chart, that should be in SVG, from MongoDB data in D3.js I have not put this on OpenShift yet, but may. The Python code prints out HTML that looks like this: Not much going on here, just a simple D3.js bar chart – not even done in SVG. I return all the HTML and you get the page displayed at the top of this post. Mongoviewer-server. MongoDB + Node.js + Express + D3 Install API Server CLI MongoDB + Node.js + Express npm install -g mongoviewer-server Usage Start your MongoViewer API Server: 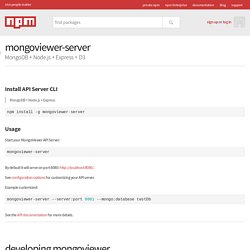