Winaero Tweaker 0.17.1 is here with 2 fixes and 1 new feature. Hello Tweaker users, here is a quick update to the previously released version 0.17. 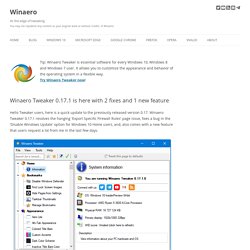 Winaero Tweaker 0.17.1 resolves the hanging 'Export Specific Firewall Rules' page issue, fixes a bug in the 'Disable Windows Update' option for Windows 10 Home users, and, also comes with a new feature that users request a lot from me in the last few days. RECOMMENDED: Click here to fix Windows errors and optimize system performance Winaero Tweaker 0.17.1 comes with the following changes. Export Specific Firewall Rules I have figured out why this page was hanging for many users. 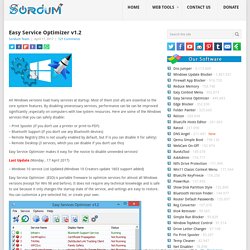 Most of them (not all) are essential to the core system features. By disabling unnecessary services, performance can be can be improved significantly ,especially on computers with low system resources. Here are some of the Windows services that you can safely disable: – Print Spooler (if you don’t use a printer or print-to-PDF) – Bluetooth Support (if you don’t use any Bluetooth devices) – Remote Registry (this is not usually enabled by default, but if is you can disable it for safety) – Remote Desktop (3 services, which you can disable if you don’t use this) Easy Service Optimizer makes it easy for the novice to disable unneeded services! 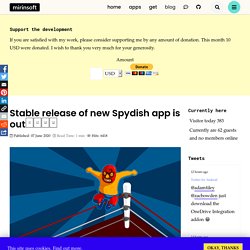 I wasn't wrong! I have now put the finishing touches on Spydish and released it as a stable version. Should some Antivirus solutions flag Spydish as Malicious, so don't worry it is a false positive. Should Microsoft read this here by chance, I would like to say only the following. Spydish tries to put this little mess into a small, clear GUI so that everybody can find every setting and check it for correctness. The team of Majorgeeks has created a short introduction video of Spydish. Ready for Windows 10, version 2004!? The new Spydish app can help! □□□ Published: 31 May 2020 Read Time: 2 mins Hits: 14884 Check your privacy state with Spydish! 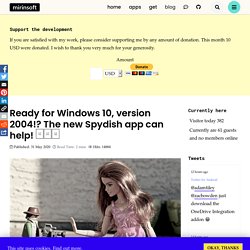 👀🙈👮 The Spydish app is the simplest way to perform a quick privacy check and set the recommended settings. Spydish works completely different than SharpApp. Mirinsoft ❤︎ Debotnet is a free and portable tool for controlling Windows 10's many privacy-related settings and keep your personal data private. 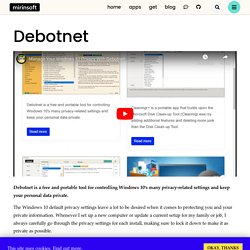 The Windows 10 default privacy settings leave a lot to be desired when it comes to protecting you and your private information. Whenever I set up a new computer or update a current setup for my family or job, I always carefully go through the privacy settings for each install, making sure to lock it down to make it as private as possible. Mirinsoft ❤︎ The Spydish app is the simplest way to perform a quick privacy and security check of your Windows 10 copy. 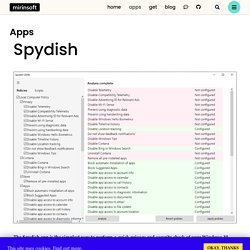 Next to this it allows you also to debloat Windows 10. Spydish integrates the most important Windows 10 privacy policies and allows you to quickly perform a privacy check against these policies. It allows you to fine-tune Windows 10's many policies and configure your privacy settings without navigating through a hundred different menus. Active policies are marked with the status "Configured" as in the Group Policy Editor and indicates that your privacy is protected. The inactive ones are declared as "Not configured". Spydish is reduced to the most necessary. Spydish requires Windows 10 including both 32-bit and 64-bit versions. Choose one of the download links below. 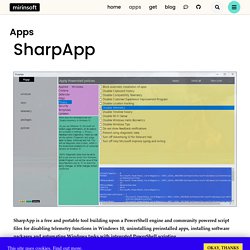 “Each major Windows 10 update resets your privacy settings to default.” Untitled. What Do Windows 10’s Basic and Full Telemetry Settings Actually Do? Windows 10 includes a telemetry service that automatically sends diagnostic and usage data about your computer to Microsoft. 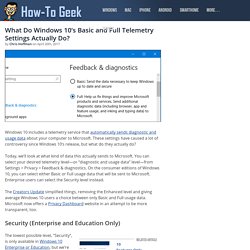 These settings have caused a lot of controversy since Windows 10’s release, but what do they actually do? Today, we’ll look at what kind of data this actually sends to Microsoft. You can select your desired telemetry level—or “diagnostic and usage data” level—from Settings > Privacy > Feedback & diagnostics. On the consumer editions of Windows 10, you can select either Basic or Full usage data that will be sent to Microsoft.

Enterprise users can select the Security level instead. The Creators Update simplified things, removing the Enhanced level and giving average Windows 10 users a choice between only Basic and Full usage data. Destroy Windows 10 Spying master. Grab the Tool. Nummer/Destroy-Windows-10-Spying. How to Stop Windows 10 From Logging Personal Data. The Windows operating system is easily one of the most extensive and prevalent pieces of software developed, and so are Windows 10 data logging practices. 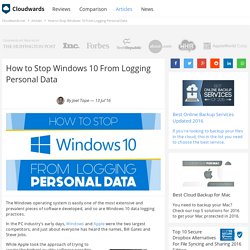 In the PC industry’s early days, Windows and Apple were the two largest competitors, and just about everyone has heard the names, Bill Gates and Steve Jobs. While Apple took the approach of trying to create the highest quality software possible, Microsoft’s strategy was to “mass produce” software, that would make it available on more systems. As such, Windows is frequently thought of as an inferior operating system — that’s riddled with bugs and viruses. Though there are fair arguments regarding the advantages of either operating system, there is a grain of truth to the idea that Windows is inferior. Untitled. DoNotSpy10. O&O ShutUp10: download free antispy tool for Windows 10. 07.10.2020 5:00 O&O Software. Destroy Windows Spying - Windows spying removal tool. Untitled. Disable Cortana. 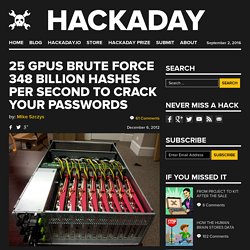 But they’re not the only benefactors to these advances. As we’ve heard before, a graphics processing unit is uniquely qualified to process encryption hashes quickly (we’ve seen this with bitcoin mining). This project strings together 25 GPU cards in 5 servers to form a super fast brute force attack. It’s so fast that the actual specs are beyond our comprehension. How can one understand 348 billion hashes per second? The testing was used on a collection of password hashes using LM and NTLM protocols. [via Boing Boing] Hyperlink. Security, Windows.