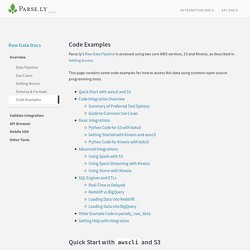 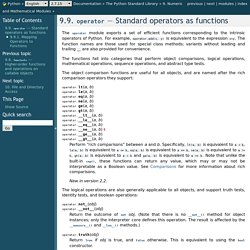 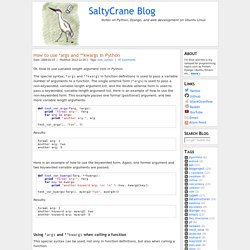 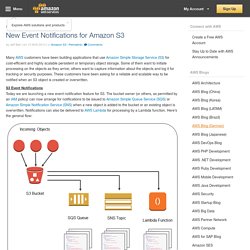 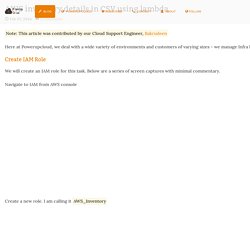 So it is necessary for our support engineers to get familiar with new features and also continue to hone their skills on existing AWS technologies. We have a dedicated AWS account for R&D and all of our support engineers have access to it. To avoid a bill shock at the end of the month, we wanted to collect an inventory of resources every day in CSV format, store it on S3 and trigger an email. 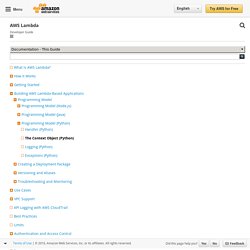 You can use the request ID for any follow up inquiry with AWS support. If the Lambda function is invoked through AWS Mobile SDK, you can learn more about the mobile application calling the Lambda function. AWS Lambda provides this information via the context object that the service passes as the second parameter to your Lambda function handler. For more information, see Lambda Function Handler (Python). The following sections provide an example Lambda function that uses the context object, and then lists all of the available methods and attributes. Note. AWS Lambda Functions in Go - There’s no place like. Update 1: Thanks @miksago for the much more robust node.js wrapper. 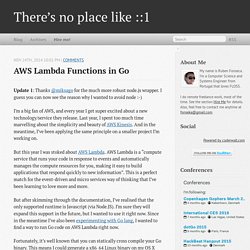 I guess you can now see the reason why I wanted to avoid node :-) I’m a big fan of AWS, and every year I get super excited about a new technology/service they release. Last year, I spent too much time marvelling about the simplicity and beauty of AWS Kinesis. And in the meantime, I’ve been applying the same principle on a smaller project I’m working on. But this year I was stoked about AWS Lambda.

But after skimming through the documentation, I’ve realised that the only supported runtime is Javascript (via Node.JS). Fortunately, it’s well known that you can statically cross compile your Go binary. Just uploaded a cross compiled Golang binary to AWS Lambda and called it from the node.js function: it works flawlessly #happy #hack— Ruben Fonseca (@rubenfonseca) November 21, 2014. Hacking with AWS Lambda and Python. Ever since AWS announced the addition of Lambda last year, it has captured the imagination of developers and operations folks alike. 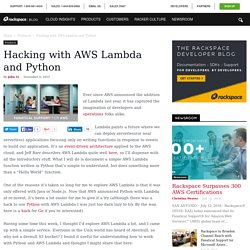 Lambda paints a future where we can deploy serverless(or near serverless) applications focusing only on writing functions in response to events to build our application. It’s an event-driven architecture applied to the AWS cloud, and Jeff Barr describes AWS Lambda quite well here, so I’ll dispense with all the introductory stuff. Example of python code to submit spark process as an emr step to AWS emr cluster in AWS lambda function.

FlyTrapMind/saws: A supercharged AWS command line interface (CLI). Python - How to launch and configure an EMR cluster using boto. Elastic Map Reduce with Amazon S3, AWS, EMR, Python, MrJob and Ubuntu 14.04. This tutorial is about setting up an environment with scripts to work via Amazon's Hadoop implmentation EMR on huge datasets. With dataset I mean extremely large datasets and a simple yet powerful grep does not cut it any more for you. What you need is Hadoop. Setting up Hadoop the first time or scaling it can be to much of an effort, this is why we switched to Amazon Elastic Map Reduce, or EMR, Amazon's implementation of Yahoo! 's Hadoop, which itself is an implementation of Google's MapReduce paper.

Amazon's EMR will take care of the Hadoop architecture and scalability; in the likely case one cluster is not enough for you. So let me outline the architecture of the tools and services I have in mind to get our environment going. You will need your Access Key, Private Key and usually a private key file to access AWS from programatically. cntml. S Scientific Computing Blog: Use Boto to Start an Elastic Map-Reduce Cluster with Hive and Impala Installed. I spent all of yesterday beating my head against the Boto document (or lack thereof). 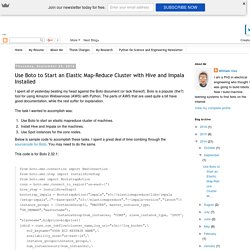 Boto is a popular (the?) Tool for using Amazon Webservices (AWS) with Python. The parts of AWS that are used quite a bit have good documentation, while the rest suffer for explanation. The task I wanted to accomplish was:Use Boto to start an elastic mapreduce cluster of machines.Install Hive and Impala on the machines.Use Spot instances for the core nodes. Gallamine's Scientific Computing Blog: Use Boto to Start an Elastic Map-Reduce Cluster with Hive and Impala Installed. Programcreek. Python boto Examples. This page shows the popular functions, classes, and variables defined in the boto module. 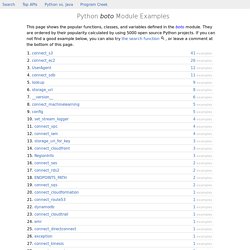 They are ordered by their popularity calculated by using 5000 open source Python projects. If you can not find a good example below, you can also try the search function , or leave a comment at the bottom of this page. Python boto.lookup Examples. The following are 9 code examples for showing how to use boto.lookup. They are extracted from open source Python projects. You can click to vote up the examples you like, or click to vote down the exmaples you don't like. Python S3 Examples — Ceph Documentation. Listing Owned Buckets This gets a list of Buckets that you own. This also prints out the bucket name and creation date of each bucket. for bucket in conn.get_all_buckets(): print "{name}\t{created}".format( name = bucket.name, created = bucket.creation_date, ) The output will look something like this:

Aws-python-sample/s3_sample.py at master · FlyTrapMind/aws-python-sample. Boto: A Python interface to Amazon Web Services — boto v2.41.0. Note You are viewing the documentation for an older version of boto (boto2). Boto3, the next version of Boto, is now stable and recommended for general use. It can be used side-by-side with Boto in the same project, so it is easy to start using Boto3 in your existing projects as well as new projects.

Depending on the environment, you may need to run 'sudo pip install boto', if the following command doesn't work due to insufficient permissions. Create your credentials file at ~/.aws/credentials (C:\Users\USER_NAME\.aws\credentials for Windows users) and save the following lines after replacing the underlined values with your own. [default] aws_access_key_id = YOUR_ACCESS_KEY_ID. Getting Started with AWS and Python : Articles & Tutorials : Amazon Web Services.