Nytimes. Of course, America has long been entranced by conspiracy theories. 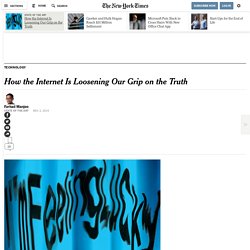 But the online hoaxes and fringe theories appeared more virulent than their offline predecessors. They were also more numerous and more persistent. During Mr. Obama’s 2008 presidential campaign, every attempt to debunk the birther rumor seemed to raise its prevalence online. Ranked #1 in the World for Political Social Media; Beats HuffPo by 2 Million. The site came out on top in research conducted by NewsWhip. 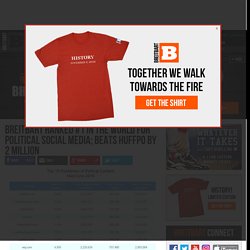 Besting the competition on a list that also includes CNN, The Hill, and The Guardian, Breitbart News had a total combined 9,098,o13 Twitter and Facebook interactions, of which 89% came from Facebook and 11% from Twitter. Here's How Election 2016 Is Playing Out On Social Media. Election Day: 716.3 Million Interactions From 115.3 Million Facebook Users; 75 Million Tweets. Did Social Media Ruin Election 2016? Dan Sipple/Ikon Images/Getty Images. 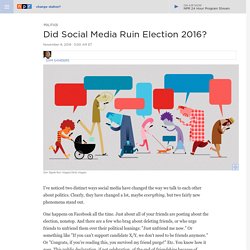 Obama is right: Social media deepens political division. Americans are blocking out the friends and news sites that won't confirm their views. 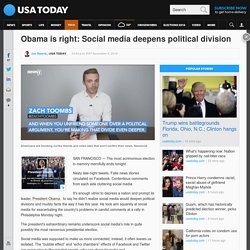 Newslook SAN FRANCISCO — The most acrimonious election in memory mercifully ends tonight. Nasty late-night tweets. Fake news stories circulated on Facebook. Contentious comments from each side cluttering social media. How the Pro-Trump Media Covered Election Day. Photo The polls weren’t looking all that good, and the polls of polls were looking even worse. 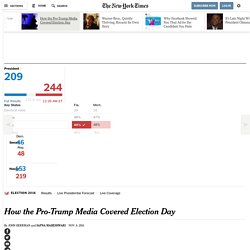 But in the early hours of Election Day, the prevailing mood among the coterie of popular websites, internet communities and social media users who support was electric. On Breitbart News Network, a website whose chairman, Stephen K. Bannon, took a leave of absence in August to become chief executive of Mr. How the 2016 campaign changed political journalism – Poynter. After this election finally comes to an end, American journalists will be left to assess a chaotic race that has pushed at the conventions of campaign reporting. 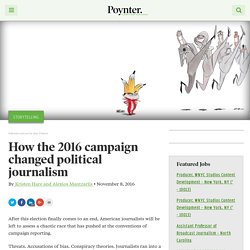 Threats. Accusations of bias. Conspiracy theories. Journalists ran into a combination of falsehoods and media bashing that set 2016 apart from other U.S. presidential campaigns. So, how did the political press do? To find out, Poynter collected 20 responses from journalists and media observers who've paid close attention to coverage throughout this election cycle. You can find excerpts of their answers embedded in the story below. 1. The Press Run: Poynter’s Election Day liveblog – Poynter. Live video takes center stage on Election Day. The biggest winner of Election Day — after Hillary Clinton or Donald Trump, that is — will be Facebook and live video in general. 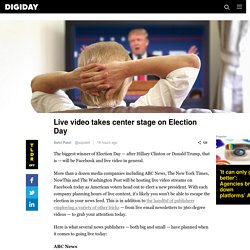 More than a dozen media companies including ABC News, The New York Times, NowThis and The Washington Post will be hosting live video streams on Facebook today as American voters head out to elect a new president. With each company planning hours of live content, it’s likely you won’t be able to escape the election in your news feed. This is in addition to the handful of publishers employing a variety of other tricks — from live email newsletters to 360-degree videos — to grab your attention today.

Here is what several news publishers — both big and small — have planned when it comes to going live today: How #Election2016 was Tweeted so far. The historic 2016 U.S. election comes to a close tomorrow as voters across the country head to the polls and exercise their right to vote. 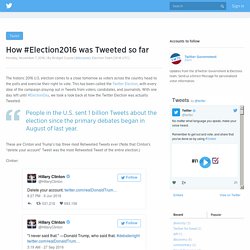 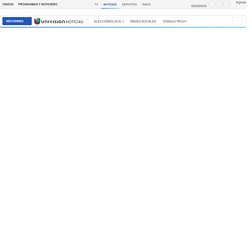 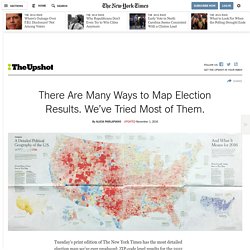 The map is part of a special election section that aims to help explain the political geography of the United States — identifying where people who are conservative and liberal live and pointing out how physical boundaries, like the Rio Grande and the Cascade Mountains, often align with political ones. This level of detail reveals patterns otherwise masked in a state or county-level map, like the presence of small, Democratic urban areas in even the reddest states, and the stripes of red, yellow and blue along Long Island in New York. Just like the county-level map below, the bulk of the map is covered in red. The observation is not wrong — a shaded-area map of the United States does not accurately represent population. This isn’t the only way we represent results on election night. The Digital Transition: How the Presidential Transition Works in the Social Media Age.

USA Today Network: 2016 Electoral College - USA TODAY. How the 2016 presidential candidates measure up on social media. Donald Trump would be the first to tell you that he's this election cycle's King of Twitter, but he's far from the first to take to the Internet in the name of generating political momentum. Social media platforms have become the online soap box for anyone seeking to win the presidency, and some candidates find more of a following than others. With voters in New Hampshire set to cast their ballots, here's a look at how successfully the major contenders of each party have gotten their messages out across various platforms. As the elections continue, we'll be updating these numbers as they rise and fall, so bookmark this page. Editors' Note: All figures current as of February 8, 2016.

Twitter and Facebook Real estate mogul and Republican candidate Donald Trump sits atop both the Twitter and Facebook leaderboards as the only candidate from either party who can claim more than 5 million followers and more than 5 million likes. Enlarge Image YouTube and Instagram Snapchat. How the 2016 presidential candidates measure up on social media. Here’s How Social Media Will Impact the 2016 Presidential Election.

So far, the run up to the 2016 elections has been, at various times, amusing or weird, but mostly interesting, thanks to social media. If not for this ever flexible, we wouldn’t have seen this hilarious Snap of Hillary chillin’, the world wouldn’t be same without those odd Trump-isms on Twitter, or worse, we wouldn’t have known what Scott Walker is eating! If we are to believe the figures estimated by Borrell Associates, politicians will be allocating over 9 percent of media budget towards digital and social media — this comes to an estimated $1 billion. Welcome to the social media election. Social media is driving the 2016 presidential race, as candidates of both parties increasingly view Facebook, Twitter and Instagram as key battlegrounds in the fight for the White House.

Campaigns have used social media in past elections. Artisan Politics - Washington Post. Hillary Clinton on the Issues. Photo , a former secretary of state, has been most outspoken in recent years on foreign policy matters. But she has also taken positions on domestic and economic issues, like immigration and income inequality, that have been at the center of policy discussions since she left government. Here is a look at where she stands on some major issues. Foreign Policy. Who Is Running for President (and Who’s Not)?