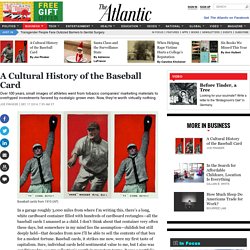 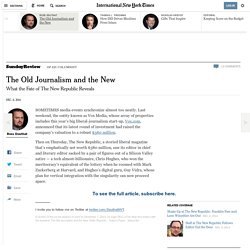 Last weekend, the entity known as Vox Media, whose array of properties includes this year’s big liberal-journalism start-up, Vox.com, announced that its latest round of investment had raised the company’s valuation to a robust $380 million. Then on Thursday, The New Republic, a storied liberal magazine that’s emphatically not worth $380 million, saw its editor in chief and literary editor sacked by a pair of figures out of a Silicon Valley satire — a tech almost-billionaire, Chris Hughes, who won the meritocracy’s equivalent of the lottery when he roomed with Mark Zuckerberg at Harvard, and Hughes’s digital guru, Guy Vidra, whose plan for vertical integration with the singularity can now proceed apace. 33 ideas provocativas para hacer tu contenido más interesante - SocialBro. Comunicació 21 » El portal català del sector de la comunicació. The newsonomics of NPR One and the dream of personalized public radio. Pascual Serrano: "Lo que muere no es la prensa, sino chiringuitos empresariales"

The Ultimate Video Playbook. Video has always been an effective medium for brand storytelling. 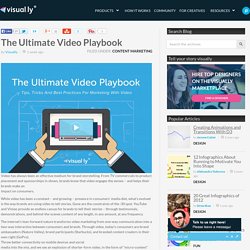 From TV commercials to product placement and sponsorships in shows, brands know that video engages the senses – and helps their brands make an impact on consumers. While video has been a constant – and growing – presence in consumers’ media diet, what’s evolved is the way brands are using video to tell stories. Gone are the constraints of the :30 spot. YouTube and Vimeo provide an endless canvas for brands to tell their stories – through testimonials, demonstrations, and behind-the-scenes content of any length, in any amount, at any frequency.

The internet’s lean-forward nature transforms video marketing from one-way communication into a two-way interaction between consumers and brands. 9 GIFs That Explain Responsive Design Brilliantly. What is responsive design? 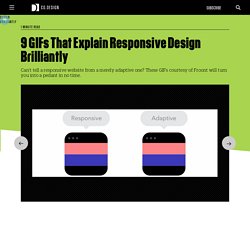 Most people vaguely understand that it refers to websites that work just as well on desktops as they do on smartphones, but there's a lot more to it than that, leading to widespread confusion (heck, I'll admit, I've even been known to misuse it myself, even after fellow Co.Design writer John Pavlus called me a dummy for it). But the principles of responsive design aren't that hard to understand, thanks to this amazing collection of animated GIFs put together by the guys Froont, a San Francisco-based company specializing in making tools for designers to create responsive websites. 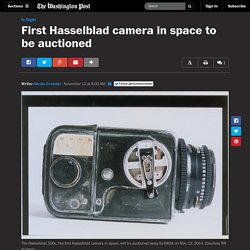 (Courtesy RR Auction) In 1962, astronaut Wally Schirra piloted the Mercury Atlas-8 into space, carrying with him a special device that would become a historic artifact: a Hassleblad 500c camera, the first Hasselblad camera to ever go into space. On Nov. 13, Boston-based RR auction will auction the Hasselblad. To Understand Religion, Think Football - Issue 17: Big Bangs. The invention of religion is a big bang in human history. 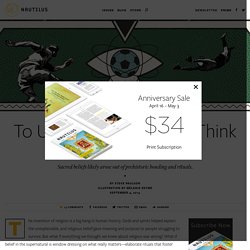 Gods and spirits helped explain the unexplainable, and religious belief gave meaning and purpose to people struggling to survive. But what if everything we thought we knew about religion was wrong? A Short History of Interactivity — Reinventing storytelling. Interaction against the machine And then there was the Internets, well the computer let’s say. 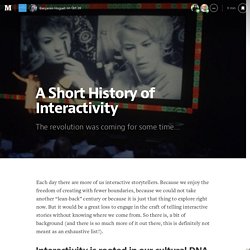 All the innovators that attempted deconstructing linearity finally had their own medium. Then begun the great battle between humans and machines. Indeed if what you are seeking is to interact with humans, how can this intention be preserved while delivering your experience through an interface? I hope that you don’t see the world as a market, but rather a place people live in — you are designing for people, not machines. — Red Burns This part of history challenges the very meaning of interactivity. Story Map — Design story. Rise from pixel-pusher to a product visionary with a new type of design document called a “story map.” 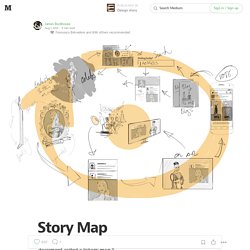 What is a story map? A story map is a new type of design document that shows the big idea of your product experience at a glance. A good story map is your golden ticket to unify your team, secure executive support, and help you find a way to ship. Halfway between a storyboard and a treasure map, it bundles the value and functional flow of your product with the delight people might feel at each step in your product. It sketches the UX flow without locking it down, and it delivers the gist of an idea and the emotional gestalt without prematurely belaboring the details. Luxembourg tax files: how tiny state rubber-stamped tax avoidance on an industrial scale. A cache of almost 28,000 pages of leaked tax agreements, returns and other sensitive papers relating to over 1,000 businesses paints a damning picture of an EU state which is quietly rubber-stamping tax avoidance on an industrial scale. 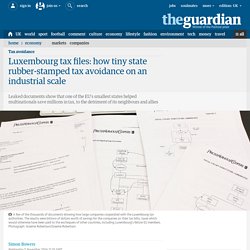 The documents show that major companies — including drugs group Shire, City trading firm Icap and vacuum cleaner firm Dyson, who are headquartered in the UK or Ireland — have used complex webs of internal loans and interest payments which have slashed the companies’ tax bills. These arrangements, signed off by the Grand Duchy, are perfectly legal. Mobile Videos in China. It has been reported this year that mobile internet access has become the primary way to get online for the majority of Chinese, outnumbering, for the first time, the desktop based access. 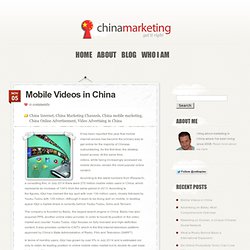 At the same time, videos, while being increasingly accessed via mobile devices, remain the most popular online content. According to the latest numbers from iResearch, a consulting firm, in July 2014 there were 270 million mobile video users in China, which represents an increase of 134% from the same period in 2013. According to the figures, iQiyi has claimed the top spot with over 134 million users, closely followed by Youku-Tudou with 129 million. Although it seem to be doing well on mobile, in desktop space iQiyi’s market share is currently behind Youku-Tudou, Sohu and Tencent. The company is founded by Baidu, the largest search engine in China. This is the current market share breakdown of the top mobile video providers in China:

These Football Times. Guardian executive digital editor: 'The decline of print is an absolute given.' Despite all the signs to the contrary, many in the newspaper business still hold on to the idea that print will have a big role to play in the long-term future of news organisations. But for the man brought in to revamp the Guardian's digital editorial operation as its new executive editor for digital - former NYT associate managing editor for digital strategy Aron Pilhofer - there's little doubt about print's looming irrelevance: "The NYT wrote a story about the paywall, but said 'the future of print is unclear'.

There is nothing unclear, [decline] is an absolute given, it's not like ad revenue is going to come swinging back. " Speaking to TheMediaBriefing at developer gathering MozFest in London, Pilhofer said it's not simply that the decline is inevitable, but that it will happen quicker than many expect. Inside The New York Times’ video strategy. One big part of The New York Times’ post-newspaper strategy: video. The publisher rolled out a new video player this week. It swallows four times the screen real estate of its predecessor, spanning the Times homepage edge to edge. But the new player represents more than a design enhancement. It’s a recognition that video is a chief priority for the company as it looks to a digital future. Like many other publishers, the Times is aggressively investing in its video operations even as it shrinks other parts of the newsroom.

If you don’t like algorithmic filters, you’re probably not going to like the future of Twitter. There was a lot of attention on Twitter on Monday, as the company reported its quarterly financial results: despite meeting Wall Street estimates on things like revenue, the network’s share price slid by almost 10 percent. According to most of the stock experts who commented on the slump, investors were looking for better user growth and engagement numbers — and that dilemma helps explain why Twitter is going to continue to muck around with your timeline using algorithms, regardless of whether users want it to do so. The first hint that this trend was likely to accelerate came during an interview last month with new chief financial officer Anthony Noto, who said that the traditional reverse-chronological timeline arrangement “isn’t the most relevant for the user.”

CHARTS OF THE DAY: How Far The Newspaper Industry Has Fallen In 10 Years. Former Washington Post editor Robert G. Kaiser has written an essay for The Brookings Institution on the decline of America’s newspapers with devastating takeaways for those with a vested interest in the industry. All in all, the big traditional news outlets have been slow to adapt to the new media environment. People have changed their news consumption habits, ad dollars have fled out the door, and fewer and fewer people are willing to pay for news at all. Big Bang Data // Periodisme de dades, una nova era del coneixement (vo cat i eng) Ser mediocre, ¿puede ser bueno para tu carrera? - BBC Mundo.