13 Tácticas que no te puedes perder. How to Use Facebook Live 360 Video for Marketing : Social Media Examiner. Are you live-streaming on Facebook? 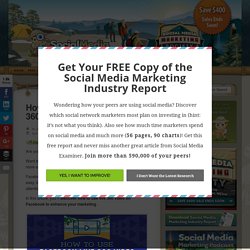 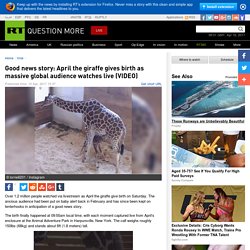 The anxious audience had been put on baby alert back in February and has since been kept on tenterhooks in anticipation of a good news story. The birth finally happened at 09:55am local time, with each moment captured live from April’s enclosure at the Animal Adventure Park in Harpursville, New York. The calf weighs roughly 150lbs (68kg) and stands about 6ft (1.8 meters) tall. The Facebook livestream of the birth has so far amassed over 6.4 million views and generated a vibrant discussion of some 390,000 comments. Another YouTube livestream is being watched by over 1 million people. 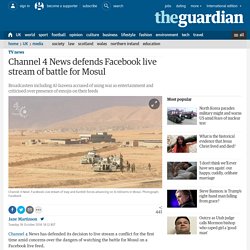 The publicly owned broadcaster joined other TV stations including Al-Jazeera and Rudaw, the Kurdish news agency that provided the content, to live stream the advance of Iraqi troops and Kurdish fighters into Mosul, Islamic State’s last major stronghold in Iraq. Watched more than 500,000 times by lunchtime on Tuesday, the Channel 4 News feed prompted a mixed response with several users questioning the appropriateness of “liking” and pasting emojis on scenes of potential devastation. In an email, Jon Laurence, digital editor of Channel 4 News, told the Guardian: “On live streaming the Mosul footage, we wanted to bring the one of the most significant stories of our time to our viewers as it happened.

The Mosul feed on Al-Jazeera attracted more than 892,000 views. How The Economist is using Facebook for live audio. Facebook hasn’t made a big deal of it, but it has a live audio broadcasting feature for publishers. 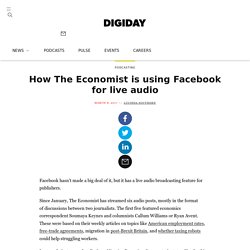 Since January, The Economist has streamed six audio posts, mostly in the format of discussions between two journalists. The first five featured economics correspondent Soumaya Keynes and columnists Callum Williams or Ryan Avent. These were based on their weekly articles on topics like American employment rates, free-trade agreements, migration in post-Brexit Britain, and whether taxing robots could help struggling workers.

Last week, it streamed audio from Nigeria, discussing the country’s state of leadership while its president has been absent for six weeks. New Ways to Watch Facebook Video. By Dana Sittler, Product Manager, and Alex Li, Engineering Manager People are watching and sharing more video on Facebook than ever, and we’re focused on continuously improving the video experience. 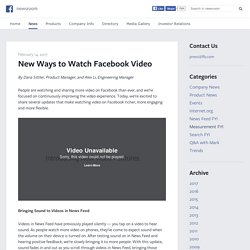 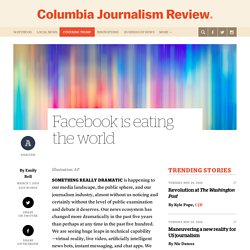 Our news ecosystem has changed more dramatically in the past five years than perhaps at any time in the past five hundred. We are seeing huge leaps in technical capability—virtual reality, live video, artificially intelligent news bots, instant messaging, and chat apps. We are seeing massive changes in control, and finance, putting the future of our publishing ecosystem into the hands of a few, who now control the destiny of many. Nytimes. Already, Facebook users can tune in to a daily celebrity news show produced by E! 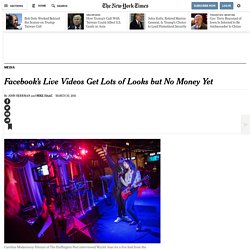 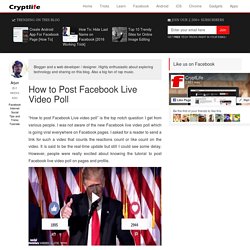 Highly enthusiastic about exploring technology and sharing on this blog. Also a big fan of rap music. “How to post Facebook Live video poll” is the top notch question I get from various people. I was not aware of the new Facebook live video poll which is going viral everywhere on Facebook pages. I asked for a reader to send a link for such a video that counts the reactions count or like count on the video. My friend and I just went surfing about this to determine if we can do the same. How to Post Facebook Live Video Poll - Crypt Life. 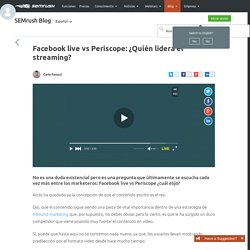 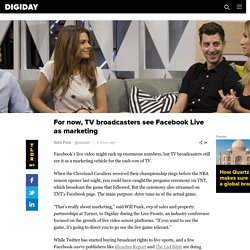 When the Cleveland Cavaliers received their championship rings before the NBA season opener last night, you could have caught the pregame ceremony on TNT, which broadcast the game that followed. But the ceremony also streamed on TNT’s Facebook page. The main purpose: drive tune-in of the actual game. Channel 4 News defends Facebook live stream of battle for Mosul. EL PAÍS, en Facebook Live. Univision Launches Live TV, Web and Social Newscast. Univision is launching a newscast at 12 p.m. ET/11 a.m. CT, but it’s how the show is going to be delivered that’s the real news. Noticiero Univision Edición Digital (Noticero Univision Digital Edition) will broadcast on the Univision Network, and it will also stream on Univision.com, Facebook Live, YouTube and Periscope. According to the network’s press release, that live broadcast/web/social/mobile broadcast grand slam is a first.

The show will be produced with the digital audience in mind: Facebook is eating the world. Facebook Live: Too Much, Too Soon. Ultimately, there is surely a hope that this could turn the valve on a new advertising stream. That all sounds good. But here’s the problem. After watching countless hours of live video in the past few weeks, I have hit upon many that are either plagued by technical malfunctions, feel contrived, drone on too long, ignore audience questions or are simply boring, by I imagine most anyone’s standards. Too many don’t live up to the journalistic quality one typically associates with The New York Times. Take one produced at the Republican convention, where we’re on the floor chatting up delegates.

And in a category all its own, there is a video of an editor with two reporters who are pitching their stories in hopes of getting good play on the home page. When Times live videos are good — and many are — they capture an immediate experience, feel spontaneous and put the viewer in a front-row seat with a hand on the controls. This is a puzzling predicament for The Times. How Sky News distributes video on Facebook, Instagram and Snapchat. The Sky News mantra is that it’s the home for breaking news, and on social media that’s no different. Its video views have gone from 94 million a month in May to 148 million in July across platforms, according to Tubular Labs. The broadcaster was the first to film a Facebook live video several hours after the attack in Nice last month, with foreign affairs editor Sam Kiley answering questions from the audience. That video has had 180,000 views. On YouTube, it live streams news around the clock; when an event is breaking, the viewers jump from 5,000 to 100,000, according to the company.

Sky News has been launch a partner for Twitter Moments and Snapchat Discover, and it makes a point of using new platform features within 24 hours of release. Advertisement On Facebook, video retention is a lot lower. Sky News front-loads the first three seconds of videos — the amount of time required for a view to count — with the most visually compelling information. Not all of Sky News’ experiments work. 12 Types of Facebook Live Videos that You Could Create to Help You Grow Your Blog and Business. This week we’re taking a deep dive into Facebook Live Video and how you can use it as a blogger to deepen relationships with your readers, build your profile, extend your reach on Facebook and much more.

Yesterday I shared 10 benefits of giving Facebook Live video a go and tomorrow I’m going to give you over 25 practical tips on how to use it effectively – but today I want to show you a variety of different types of Facebook Live videos that I’ve tried and that I’m seeing others use. Make sure you get notified in the final post in this series by subscribing to ProBloggerPLUS below. Click Here to Subscribe to ProBloggerPLUS for Free I’ve embedded a number of videos into this post – all were shot using FB live. Facebook limita el alcance orgánico para ser más rentable. Less Engagement For Links On Facebook. Las claves para hacer un buen uso de Facebook Live Video, según el NYT. Lucha e innovación por el vídeo en directo: Facebook y YouTube vs. Periscope.

The Livestream Mevo is the first camera that works with Facebook Live. How to Broadcast from your Computer with Facebook Live. Facebook Live Button Use Facebook Live on your profile, page or group: Want this button on your website? AOL is joining the live-video gold rush. When AOL-owned TechCrunch hosts its fifth Disrupt NY conference next week, people interested in following the event will be able to do so for the first time on Facebook. The tech publisher will live stream the entire multiday conference, which spotlights emerging startups, to its Facebook audience of 2.1 million followers.

This won’t be a typical smartphone-quality Facebook Live broadcast, either. All of the content, including main-stage panels and backstage interviews, will be TV-grade. Whereas almost all Facebook Live content to date has been shot using mobile devices, the TechCrunch production will be handled by a six-person video team working with a tech firm called Telescope to bring high-quality broadcasts to the platform, the company said. Advertisement. How Fusion and Vox are using Facebook live video. The Washington Post embraces live video on Facebook. Facebook will soon let you disable seeing all notifications for live videos.