Formanta Polivoks Vintage Synth Explorer.url. The Polivoks is the most popular vintage Russian synth made in the early 80's and it was among the first synthesizers produced in the USSR. 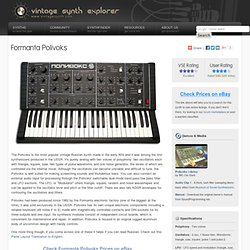 It's purely analog with two voices of polyphony, two oscillators each with triangle, square, saw, two types of pulse waveforms and one noise generator, the levels of which are controlled via the internal mixer. Although the oscillators can become unstable and difficult to tune, the Polivoks is well suited for making screeching sounds and thunderous bass. You can also connect an external audio input for processing through the Polivoks' switchable dual-mode band pass/low pass filter and LFO sections. The LFO, or "Modulator" offers triangle, square, random and noise waveshapes and can be applied to the oscillator level and pitch or the filter cutoff. There are also two ADSR envelopes for contouring the oscillators and filters.

One more thing though, if you come across one of these it helps if you can read Russian. MIDI electronic retrofits. Music Machines: Polivoks schematics. Polyvox (Polivoks) CV/Gate mod illustrated. Polivoks VCF. I repaired a Polivoks filter and was intrigued by the use of programmable op-amps for the filter cell. 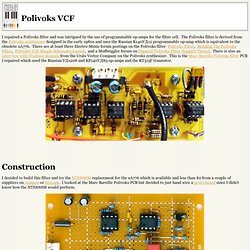 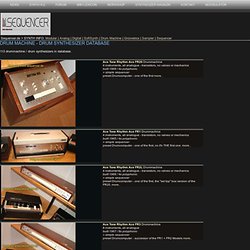 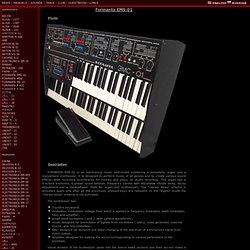 It is designed to perform music of all genres and to create various sound effects while recording soundtracks for movies and plays, or studio recording. The organ has a 5-octave keyboard, 6 preset sound timbres, frequency vibrato with adjustable vibrato delay, decay adjustment and a stereophaser (both for organ and synthesizer). The synthesizer has: Visual division of the synthesizer panel into the above listed sections and their lay-out make it more easy to orientate oneself while setting the required timbre. 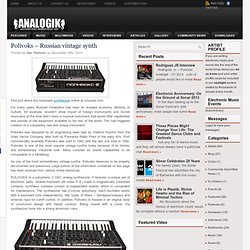 Ministry of Culture, for example, wouldn’t allow import of foreign instruments and Soviet musicians at the time didn’t have a musical instrument that would offer capabilities and sounds of the equipment available to the rest of the world. This had triggered creation of a completely new and unique instrument. Polivoks was designed by an engineering team lead by Vladimir Kuzmin from the Urals Vector Company later built by Formanta Radio Plant in the early 80′s. As one of the most extraordinary vintage synths, Polivoks deserves to be properly documented and preserved. POLIVOKS is a polyphonic 2 OSC analog synthesizer. Polivoks Rear View How did all this began ? Vladimir Kuzmin: Till the age of 10 I dreamt of becoming a painter but later I began to be interested in technic that lead me to radioelectronics.

VK: What contacts? Polivoks ze.url. More pix - here POLIVOKS is a legendary polyphonic 2 OSC analog synthesizer; it was among the first synthesizers produced in the USSR. 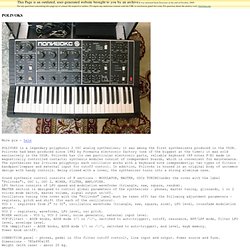 Polivoks had been produced since 1982 by Formanta electronic factory (one of the biggest at the time); it was sold exclusively in the USSR. Polivoks has its own particular electronic parts, reliable keyboard (49 notes F–E) made in magnetically controlled contacts; synthesis modules consist of independent boards, which is convenient for maintenance. The synthesizer has 2-voices polyphony; each oscillator works with a keyboard note independently; two types of filters – bandpass/lowpass and external input for cutoff control. In addition, Polivoks is housed in an original body of uncommon design with handy controls. Sound synthesis control consists of 8 sections – MODULATOR, MASTER, OSCs TUNING(under the cover with the label "Polivoks"), OSC 1, OSC 2, MIXER, FILTER, AMPLIFIER.