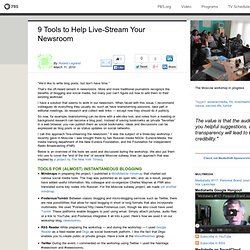 That’s the oft-heard lament in newsrooms. More and more traditional journalists recognize the benefits of blogging and social media, but many just can’t figure out how to add them to their existing workload. I have a solution that seems to work in our newsroom. When faced with this issue, I recommend colleagues do everything they usually do, such as have brainstorming sessions, take part in editorial meetings, do research and collect web links — except now they should do it publicly. So now, for example, brainstorming can be done with a wiki-like tool, and notes from a meeting or background research can become a blog post. I call this approach “live-streaming the newsroom.” Below is an overview of the tools we used and discussed during the workshop. Tools for (Almost) Instantaneous Blogging Mindmaps In preparing the project, I published a MindMeister mindmap that charted out various social media tools. Mindset Related. My RSS Feeds. Dow Jones Financial Information Services.

Stocks in the News: Discover, Intel, Citigroup, Harley Davidson. Stocks held on to gains as the Federal Reserve left its key lending rate unchanged and on better-than-expected news from economic reports on housing starts and import prices. 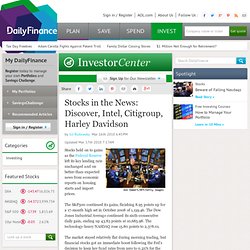 The S&P500 continued its gains, finishing 8.95 points up for a 17-month high set in October 2008 of 1,159.46. The Dow Jones Industrial Average continued its sixth-consecutive daily gain, ending up 43.83 points at 10,685.98. The technology-heavy NASDAQ rose 15.80 points to 2,378.01. The market stayed relatively flat during morning trading, but financial stocks got an immediate boost following the Fed's decision to keep key fund rates from zero to 0.25% for the immediate future. The following is a round-up of the most active, gainers and losers from Tuesday's trading session: Discover Financial Services (DFS), after the market closed, reported a narrower net loss for the first quarter of 2010 of $104 million, compared to $120 million the first quarter of 2009. Personal Finance. Latest Financial News From AP. AmpMyVoice: Home. Welcome.

But it also warns retailers face a tougher environment during the next decade that will force changes in how and what they sell. %%DynaPub-Enhancement class="enhancement contentType-HTML Content fragmentId-1 payloadId-61603 alignment-right size-small"%% Retailers will have a good year in 2010 "not a great year, but pretty good," said Ira Kalish, director of global economics for Deloitte Research. Several countries, including the U.S., are emerging from the recession and facing pent-up consumer demand, which should drive higher sales. "In five, ten years, this will be a rougher market for retailers," he told the annual meeting of the National Retail Federation. Your Newsfeed. 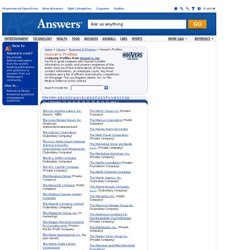 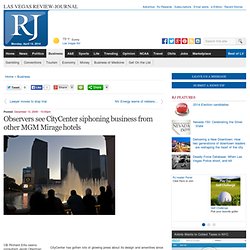 Predictions about how well the 5,800-room mixed-use project will attract new customers to Las Vegas are a bit more dour, though. In a report looking at projections for 2010, CB Richard Ellis casino consultant Jacob Oberman, for instance, predicts that Strip gaming and nongaming revenues will increase 3 percent to 7 percent next year, but 70 percent to 90 percent of CityCenter's initial revenues will come at the expense of other Strip properties.

"It is difficult to make a case that CityCenter will not have at least some dilutive effect on the market," Oberman's report said. RGE Monitor. Financial Headline News &amp; Analysis · FinanceYard.com. Our Top Stories - www.implu.com. As our users roam about the implu site, they come across interesting tidbits of information. Join implu for free and start sharing your finds with the broader community. Subscribe to our RSS feed Southwest CFO: No cash problem DALLAS (AP) -- Southwest Airlines has "very limited financing needs" and little immediate exposure to the turmoil in the financial markets, the chief financial officer said Wednesday. Laura Wright said Southwest (LUV, Fortune 500), which enters fuel-hedging transactions with financial-services firms as counterparties, has no exposure to bankrupt Lehman Brothers (LEH, Fortune 500) and only a small amount to brokerages that don't have a commercial banking side. 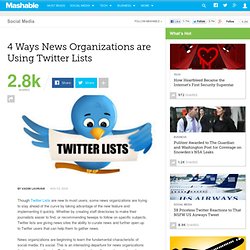 Whether by creating staff directories to make their journalists easier to find, or recommending tweeps to follow on specific subjects, Twitter lists are giving news sites the ability to curate news and further open up to Twitter users that can help them to gather news. News organizations are beginning to learn the fundamental characteristic of social media: it's social.

This is an interesting departure for news organizations that were primarily using Twitter as a service for self-promotion, such as the case with ESPN, whose social media policies serve ESPN efforts first. Or like policies of The Wall Street Journal, which were criticized for being too restrictive. The list of ways news organizations are using Twitter Lists is expanding. 1. 2. Home. Business News. 1 hr ago | SFGate Gov't: GM missed deadline for faulty switch data A government safety agency is fining General Motors $7,000 a day, saying the company failed to fully respond to its requests for information about a faulty ignition switch by an April 3 deadline. 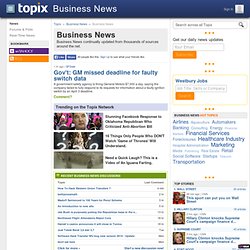 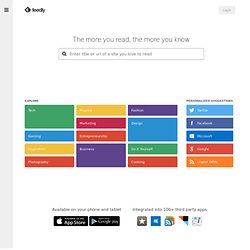