Personal Development Training. Arts & Culture. Exploring Neoliberal Cartographies. Extreme present: the age of earthquakes “Shumon Basar, writer, thinker and cultural critic, Douglas Coupland, the renowned author of ‘Generation X’, and Hans Ulrich Obrist, one of the world’s best-known curators, joined forces for a special event with Intelligence Squared to explore the challenges that the planet faces in the Extreme Present. 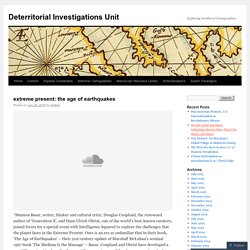 Creating a product. World Digital Library Home. Developing Self-Awareness: The JoHari Window. Create Your Course with Pearltrees. The Movement Action Plan. By Bill Moyer, Spring 1987 The United States anti-nuclear energy movement was launched in the Spring of 1977, when 1,414 Clamshell Alliance activists occupied the Seabrook nuclear power site and spent the next 12 days in jail. 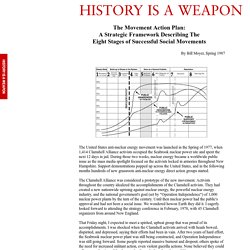 During those two weeks, nuclear energy became a worldwide public issue as the mass media spotlight focused on the activists locked in armories throughout New Hampshire. Support demonstrations popped up across the United States, and in the following months hundreds of new grassroots anti-nuclear energy direct action groups started. The year was 1994. 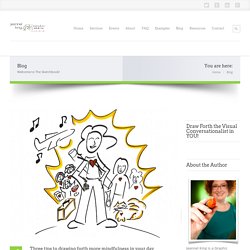 I was in my poor little 1978 Toyota Celica hatchback–held together by prayers, rust and duct tape, and with a sunroof that leaked like a sieve–driving home from a evening college class in the rain after a long day at work. I was tired, I was drained, I was wet from the rain seeping through that sunroof, and all I wanted to do was get home. Then it happened: my car began to stutter and gasp, to slow and stall, finally coasting to a stop along the side of the 805 freeway. Working for a nonprofit at the time, I was beyond poor, and the last thing I needed — the last thing I could AFFORD — was for my car to have a problem. Sitting in that driver’s seat on the side of the road, something inside of me snapped. Mindfulness draws forth I share this story with you so that you understand that being mindful isn’t something I simply do after a yoga class: it’s how I live my life. 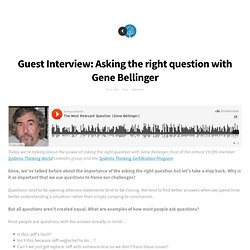 Gene, we've talked before about the importance of the asking the right question but let's take a step back. Why is it so important that we use questions to frame our challenges? Questions tend to be opening whereas statements tend to be closing. We tend to find better answers when we spend time better understanding a situation rather than simply jumping to conclusions.

But all questions aren't created equal. Most people ask questions with the answer already in mind… Is this Jeff’s fault? Okay - clearly those aren't going to be that fruitful in getting at the root of a challenge. Science Points to the Single Most Valuable Personality Trait. Research is pointing to conscientiousness as the one-trait-to-rule-them-all in terms of future success, both career-wise and personal. Via How Children Succeed: Grit, Curiosity, and the Hidden Power of Character: “It would actually be nice if there were some negative things that went along with conscientiousness,” Roberts told me. “But at this point it’s emerging as one of the primary dimensions of successful functioning across the lifespan. It really goes cradle to grave in terms of how people do.” What is it? Conscientiousness is the state of being thorough, careful, or vigilant; it implies a desire to do a task well.

Virtual tour of Sistine Chapel is wondrous to behold [interactive] Forget passports, long flights, dress codes and crowds; if you never get the chance to visit the Sistine Chapel in person, that’s no reason you can’t submerse yourself in the incredible works of Michelangelo — no scaffolding required — thanks to this amazing virtual tour from the Vatican. 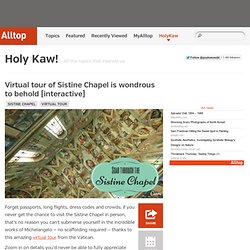 Zoom in on details you’d never be able to fully appreciate from the floor, linger on images that don’t take center stage elsewhere, all at your leisure. Full story at the Sistine Chapel via Venture Beat. Art up close. Graphics credit: Canva. Seasons of Change. We see the process of change all around us being mirrored in the seasons throughout the year. 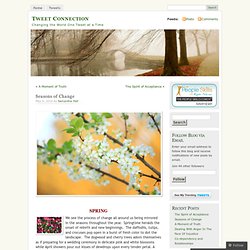 Springtime heralds the onset of rebirth and new beginnings. The daffodils, tulips, and crocuses pop open in a burst of fresh color to dot the landscape. The dogwood and cherry trees adorn themselves as if preparing for a wedding ceremony in delicate pink and white blossoms while April showers pour out kisses of dewdrops upon every tender petal. A sweet scent fills the air and our spirits are given a measure of hope as we see this new life emerge in stark contrast to the bitter cold and darkness of winter. Visually Thinking.