Brains for Planes: Etihad Taps Big Data to Keep Planes on Time. A few years ago, physics professor James Kakalios took a playful detour from the lab and the classroom and published The Physics of Superheroes, an engaging explainer of the natural laws and forces driving the amazing feats of Superman, Spider-Man, Magneto and dozens of other heroes and villains. 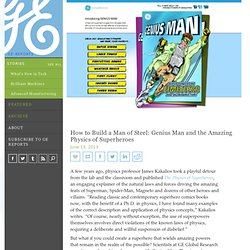 “Reading classic and contemporary superhero comics books now, with the benefit of a Ph.D. in physics, I have found many examples of the correct description and application of physics concepts,” Kakalios writes. “Of course, nearly without exception, the use of superpowers themselves involves direct violations of the known laws of physics, requiring a deliberate and willful suspension of disbelief.” But what if you could create a superhero that wields amazing powers that remain in the realm of the possible? Scientists at GE Global Research gave it some thought and came up with Genius Man. OK, maybe they did get carried away a bit, but Genius Man could make a worthy sidekick. Airworthiness Archives » AirlineBasics.com. I will begin the overview of the airworthiness regulations by a quick look at the European laws as created by EASA and put in force by the European Commission. 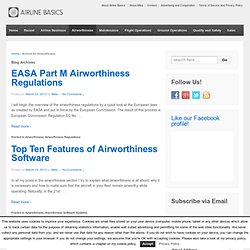 The result of this process is European Commission Regulation EC No. Aviation Business: The reality of evolving aviation maintenance management. When contemplating moving to a new Maintenance IT system it is easy to become fixated on the capabilities of the competing systems. 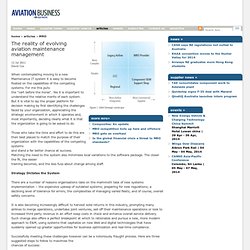 For me this putsthe "cart before the horse". Yes it is important to understand the relative merits of each system. But it is vital to lay the proper platform for decision making by first identifying the challenges faced by your organization, appreciating the strategic environment in which it operates and, most importantly, deciding clearly what it is that the organization is going to be asked to do. What Does Inventory Really Cost. Everyone agrees that to maintain aircraft you need spare parts. 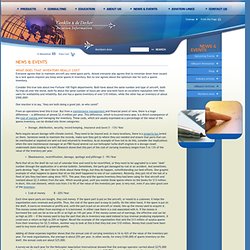 Almost everyone also agrees that to minimize down time caused by a lack spares requires you keep some spares in inventory. But no one agrees about the optimum size for such a spares inventory. Consider this true tale about two Fortune 100 flight departments. Both have about the same number and type of aircraft, both fly trips all over the world, both fly about the same number of hours per year and both have an excellent reputation with their users for availability and reliability. But one has a spares inventory of over $10 million, while the other has an inventory of about $500,000! One reaction is to say, "they are both doing a good job, so who cares? " From an operations level this is true. Storage, distribution, security, record keeping, insurance and taxes 5 - 13%/Year. AERO - Updating 787 Airplane Software Configurations. When an airline orders a Boeing airplane, it specifies settings for the configurable software options for that airplane. 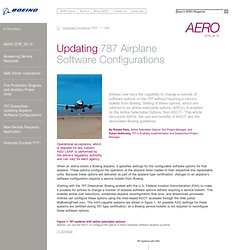 These options configure the operation of the airplane when loaded to their respective line replaceable units. Because these options are delivered as part of the airplane type certification, changes to an airplane’s software configuration requires a service bulletin from Boeing. Starting with the 787 Dreamliner, Boeing worked with the U.S. Federal Aviation Administration (FAA) to make it possible for airlines to change a number of airplane software options without requiring a service bulletin.

The cost of rising spare parts each year is a problem for airlines, and means that Delta Air Lines will continue to look for alternatives to original equipment manufacturer (OEM) material, says Richard Anderson, chief executive of the airline. 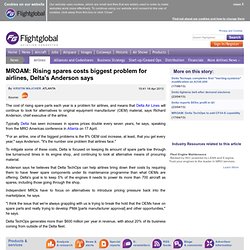 Typically Delta has seen increases in spares prices double every seven years, he says, speaking from the MRO Americas conference in Atlanta on 17 April. "For an airline, one of the biggest problems is the 8% OEM cost increase, at least, that you get every year," says Anderson. "It's the number one problem that airlines face. " To mitigate some of these costs, Delta is focused on keeping its amount of spare parts low through low turnaround times in its engine shop, and continuing to look at alternative means of procuring material. Anderson says he believes that Delta TechOps can help airlines bring down their costs by requiring them to have fewer spare components under its maintenance programme than what OEMs are offering. 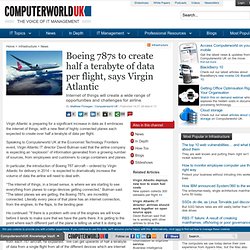 Speaking to Computerworld UK at the Economist Technology Frontiers event, Virgin Atlantic IT director David Bulman said that the airline company is expecting an “explosion” of information generated from a growing number of sources, from employees and customers to cargo containers and planes. In particular, the introduction of Boeing 787 aircraft – ordered by Virgin Atlantic for delivery in 2014 – is expected to dramatically increase the volume of data the airline will need to deal with. “The internet of things, in a broad sense, is where we are starting to see everything from planes to cargo devices getting connected,” Bulman said. Boeing 787s To Create Half a Terabyte of Data Per Flight. The 787: A catalyst for change in the MRO industry - Airline Fleet Management (AFM) Magazine. The 787 Dreamliner is one of a generation of aircraft that is ushering in a new era in the history of aviation. 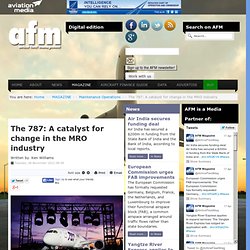 More fuel-efficient than any widebody before it, the Dreamliner has already made a name for itself as one of the most technically advanced aircraft in the world. Great change will also follow in the maintenance market as MROs consider how to care effectively for the aircraft. MROs will need to learn new skills and adapt new working patterns and tools. Viewpoint: Data As A Maintenance Driver. Www.airvault.com/_media/uploads/files/ATE&M Issue 113 Air Vault Cloud Article.pdf. A Real Need For Big Data: Preventing Airline Equipment Failures. By Christopher Koch, Editorial Director, SAP Services Marketing For the past few months, I’ve been looking for stories about how big data can bring changes that would actually transform something meaningful—a function, a business model, an industry. 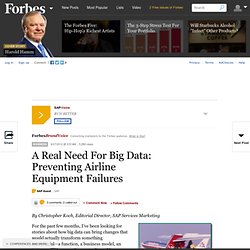 I’ll be reporting more about this over time, but I think I’ve found the first one: airlines. How aviation has become a rust belt industry...while squandering a goldmine of unused data. THE WORLD OF DATA HAS CHANGED RADICALLY IN THE PAST DECADE. 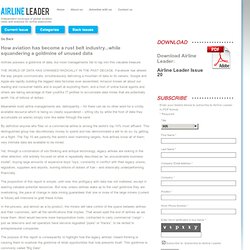 Facebook has altered the way people communicate, simultaneously delivering a mountain of data to its owners; Google and Apple are rapidly building the biggest data factories ever assembled; Amazon knows all about our reading and consumer habits and is expert at exploiting them; and a host of online travel agents and others are taking advantage of their youthful IT profiles to accumulate data mines that are potentially worth 10s of billions of dollars. Meanwhile most airline managements are, delinquently – for there can be no other word for a vividly available resource which is being so clearly squandered – sitting idly by while the host of data they accumulate (or waste) simply runs like water through the sand. By definition anyone who flies on a commercial airline is among the world’s top 10% most affluent.

This distinguished group has discretionary money to spend and has demonstrated a will to do so, by getting on a flight. Cloud Computing. With its ability to increase productivity, improve safety and reduce costs, cloud computing is transforming aviation maintenance and, in the process, improving aviation safety. It also is revolutionizing business by allowing users to access applications and information from any device with Internet access, such as tablets on the maintenance shop floor, or laptops out in the field. Consequently, users no longer are tied to a desk or workstation to do their work. Simply put, “cloud computing” is defined as a service provided over the Internet. Anyone who has ever used Facebook or accessed email online has used cloud computing. In both of these examples, the application and the data are accessed over the Internet as a service without being installed on a PC or local network. What can cloud computing do for aircraft maintenance operations? / Industry News / News / Home - OAG Aviation.

New Predictive MRO Tools Cut Costs. The "Big Five" IT trends of the next half decade: Mobile, social, cloud, consumerization, and big data. MRO IT: Intelligent maintenance - Airline Fleet Management. A distinct social shift is being played out across the globe as more people than ever have access to air travel. This year, for the first time, more people in Brazil caught a flight than a bus, with 8.7 million people taking their first commercial aircraft flight.