Teachers, Teens and Social Media: Q&A with Danah Boyd. Tripp Crosby: Conference Call in Real Life. Woman Roughly Drags Swan Out Of Water By The Wing For Selfie. Dolphin dies after beachgoers take it out of the water. Vida Silvestre, a wildlife foundation in Argentina, reported that one dolphin died after a group of beach-goers took it out of the ocean, then surrounded and handled it. 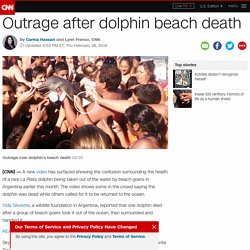 Sky News obtained video of a person removing a dolphin from the water in Santa Teresita, a coastal town about 350 kilometers southeast of Buenos Aires, and beachgoers took photos of a dolphin that appears to have been left to die in the sand. It is unclear why the dolphin was initially removed from the water, and the new video cuts off after the dolphin is laid on the sand and people are patting it. The Argentine wildlife organization released a statement urging people to return the dolphins to sea if they come across them. Selfie Loving Surgeons Are Slammed After Taking Photo With Newborn Baby. A group of selfie loving surgeons in Mexico have been slammed after taking a snap with a baby that they had just delivered. 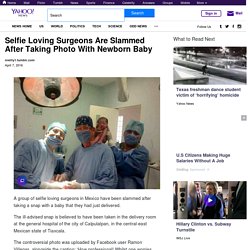 The ill-advised snap is believed to have been taken in the delivery room at the general hospital of the city of Calpulalpan, in the central-east Mexican state of Tiaxcala. The controversial photo was uploaded by Facebook user Ramon Villegas, alongside the caption: ‘How professional! Whilst one worries about their wife and new baby, hospital professionals are without ethics in the general hospital of Calpulalpan.’ In the photo, three men in blue scrubs and face-masks are seen looking at the camera as one of them holds the tiny infant over the shoulder of the doctor in the middle. Ramon even asked for Facebook users to share the photo, in the hope that the doctors involved are identified and punished. Everybody Panic! 5 Ways Social Media is Changing Our Brains. The TED Ed video below looks at five areas our brain is changing then asks students a series of questions requiring correct answers that in short explain how the use of the internet in general, and social media in particular can ruin them. 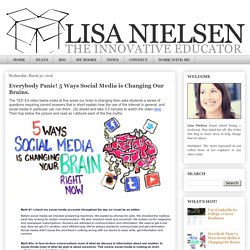 How to Optimize Your Social Media Profile. Pinterest When it comes to your online presence, telling your story, and branding yourself or your school, social media can no longer be ignored! 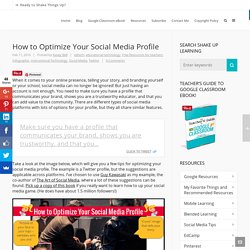 But just having an account is not enough. PIP Teens Kindness Cruelty SNS Report Nov 2011 FINAL 110711. How Social Media Has Changed The Relationship Game [Infographic] With Valentine’s Day just around the corner, now seemed like as good a time as any to take a look into social media’s growing impact on relationships. 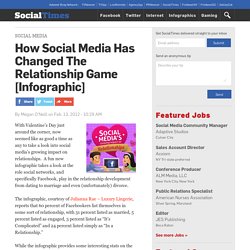 Facebook has completely changed the relationship game, from the information we share to the friends that leave comments and tag photos on our walls. Too Much Social Media? Overuse Can Damage Romantic Relationships. Using many types of online social media at once can damage romantic relationships, suggests new research-constant activity on more than four media platforms can degrade relationship satisfaction. 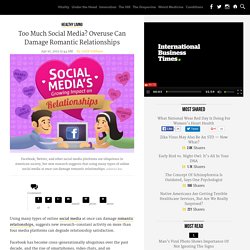 Facebook has become cross-generationally ubiquitous over the past decade, and the rise of smartphones, video chats, and an ever-expanding array of integrated social networking services now allows couples to keep the romance alive via Skype, tweet, Instagram, and Google Chat whether they're in the same room or thousands of miles apart. We Need 2 Talk: Most Teens Still Start, End Their Relationships Offline. The Pew Research Center released a new study Thursday that examines just how much technology is embedded in the romantic relationships of teenagers. 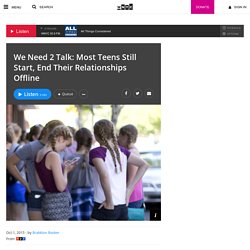 Half of the more than 1,000 teens ages 13 to 17 said they have let someone know they have feelings for them on social media sites such as Facebook, researchers found. The study, "Teens, Technology and Romantic Relationships," finds less than a tenth (8 percent) of the teenagers who participated have met a significant other online. However, social media does play an important role in maintaining young teen romances. Fifty-nine percent of the teens say social media helps make them feel connected to a boyfriend or girlfriend, according to the survey. 10 people who learned social media can get you fired. The Cop Who Documented Her Own Police Brutality - A Brief History of People Getting Fired for Social Media Stupidity. Social Media and Teen Romantic Relationships.

Many Teens View Social Media and Text Messaging as a Space for Connection, Emotional Support – and Occasional Jealousy – in the Context of Their Relationships, Although Most Say Social Media Has a Relatively Minor Impact Many teens in relationships view social media as a place where they can feel more connected with the daily contours of their significant other’s life, share emotional connections and let their significant other know they care – although these sites can also lead to feelings of jealousy or uncertainty about the stability of one’s relationship. 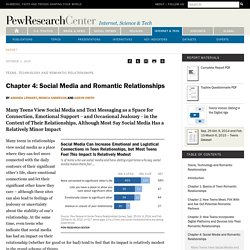 At the same time, even teens who indicate that social media has had an impact on their relationship (whether for good or for bad) tend to feel that its impact is relatively modest in the grand scheme of things. Among teen social media users with relationship experience: Boys are a bit more likely than girls to view social media as a space for emotional and logistical connection with their significant other. I Quit Texting My Boyfriend for a Week, and Here's What It Taught Me About My Relationship. I got my first cell phone when I was 12 years old and started dating my boyfriend, Nick, when I was 14. 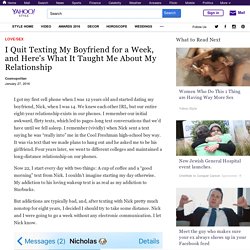 We knew each other IRL, but our entire eight-year relationship exists in our phones. I remember our initial awkward, flirty texts, which led to pages-long text conversations that we’d have until we fell asleep. Valedictorian Anonymously Posted Kind Words About Classmates On Instagram For Nearly A Year. This young student has made his classmates feel truly #blessed. 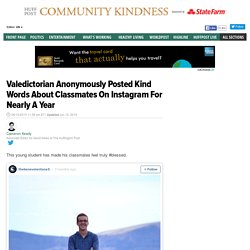 A high school valedictorian recently revealed that he was the identity behind an anonymous Instagram account that shared kind thoughts about his fellow students, ABC News reported. In a graduation speech on June 6, Konner Sauve told his classmates he had been posting to the secret account for nearly an entire year. “I wanted to focus on the better aspects of people,” the teen told the news outlet. “To shed a positive light on each individual, make them feel appreciated, and to know that someone cares. " Learning to Speak Social – 5 Tips for Getting Started.

Uk.businessinsider. College Football Recruit Loses Scholarship to Michigan Because of Twitter. Fired Over Facebook. Alexis Ohanian: How to make a splash in social media. Adam Ostrow: After your final status update. After Daughters Act Up, Mom Turns to Facebook to Make Amends. Rebecca Boyd and her daughter Ashley went to the movies Friday, but the night was ruined by two misbehaving teenagers.

Photo by Rebecca Boyd. A mother’s Facebook apology for her daughters’ “rude and obnoxious” behavior toward another mother at a movie theater has gone viral. When Birmingham, Alabama, mom Rebecca Boyd took her 12-year-old daughter Ashley to see Cinderella on Friday night, she was hoping for a quiet movie night. But what followed was an incredibly frustrating evening. STORY: Mom Searching for the Hero Who Saved Her 10-Month-Old Son At the theater two teenage girls took a seat behind Boyd and her daughter.

After the movie ended, Boyd sent Ashley to the car and approached the two misbehaving teens outside the theater. STORY: Mom of Four Answers Bullies After Posting Unretouched Photos. 'Publicly Shamed:' Who Needs The Pillory When We've Got Twitter? Is Social Media to Blame for the Rise in Narcissism?  Studies are now showing what many of you may have suspected: We are living in an increasingly narcissistic society. In a world where prime-time television is dominated by a "reality" as false as the Kardashians' lashes, and people sit across dinner tables checking in on Facebook rather than having face-to-face conversations, this may not come as a surprise.

Is technology making us less human and less social? 30 Little-Known Features of Facebook, Twitter, and More. When I first set foot in Disneyland, I race to the most famous rides first—Splash Mountain, the Matterhorn, Indiana Jones, all the biggest and best. Little do I know there are just as many hidden gems and overlooked attractions that I’ve likely missed in my sprint for the headliners. Social networks are a little like Disneyland in this regard.

There’s so much to see and so much to do that some of the fun stuff is bound to slip through the cracks. Which features of Facebook, Twitter, and the other major social networks have perhaps slipped under our noses? I went hunting for some of these little-known features and came up with over two dozen new tricks and tools to try for Facebook, Twitter, LinkedIn, Google+, Pinterest, and Instagram. Read ahead to learn all 30 little-known features (and see which ones you might already know!). Get more clicks, followers, and engagement by sharing to social media sites at the right times! 5 Little-Known Facebook Features 1.

“Save” also shows up on pages. A Guidebook for Social Media in the Classroom. Is Social Media Relevant? Take the Quiz Before we talk social media, let's talk about the relevance of social media by taking a quiz. Which of the following is most likely to be true? ☐ Should we teach letter-writing in the classroom? Kids need to write letters and mail them. The Social Media Answer. Turns out Facebook is ruining our relationships as it brings the world together. Finally, a Movie Portrays Social Media as Something Other Than Evil. In recent years, a new problem has emerged for filmmakers: how to represent digital communication onscreen. High schoolers wise up about social media when applying for colleges. High schoolers are increasingly aware that those embarrassing Facebook posts or tweets could cost them a shot at getting into their dream college.

The Internet Ruined My Relationship. If you use Facebook or Twitter then you have probably seen plenty of relationships die in front of your very eyes throughout your experience. It hardly ever is a quick and quiet death, is it? Chef Movie CLIP - Tweets Are Public (2014) - Jon Favreau, Robert Downey Jr. Movie HD.

Social Media Marketing Lessons from Chef. The Internet Is Probably Ruining Your Life, Marriage. Is social media ruining your relationships? Technology is altering the way we connect, date and break up.