Senri Kawaguchi: LOVER COME BACK TO ME. ALT Codes for Musical Note & Instrument Symbols. MusExxIdx. The images will first appear automatically formatted for your monitor.

You can either enlarge them using the magnifying glass icon or download them to your computer and select size and resolution there. The files are in JPG or PNG format except where otherwise stated . Abbreviations gtr = guitar ldsht = lead sheet chord shorthand mel = melody rec = recorded/recording Octatonic mode ×2: 1 ½ 1 ½ etc. Music Theory: Chord Progressions. The number of ways chords can go together to produce new and interesting sounds is nearly infinite. 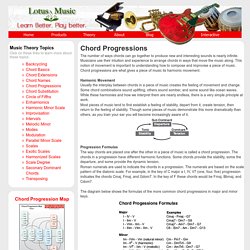 Musicians use their intuition and experience to arrange chords in ways that move the music along. Harmonized Major Scale. Major Chord Progressions. Chord progressions are the harmonic foundations of music and knowing how chords work together is crucial to understanding music whether you are playing it or writing it. 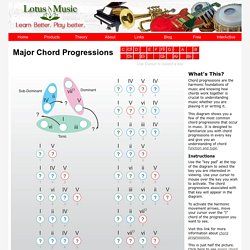 This diagram shows you a few of the most common chord progressions that occur in music. It is designed to familiarize you with chord progressions in every key and give you an understanding of chord function and type. Instructions. Music Theory: Enharmonics. Enharmonics are notes that are the same pitch but are known by two different names, for instance C# and Db. 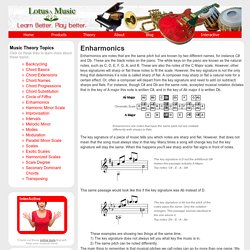 These are the black notes on the piano. The white keys on the piano are known as the natural notes, such as C, D, E, F, G, A, and B. Lotus Music: Music Theory, Books, Circle of Fifths, and more. The first piece of equipment installed in the music theory playground shows the harmonized major scale in every key. 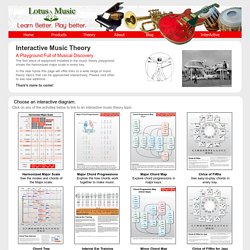 In the near future this page will offer links to a wide range of music theory topics that can be approached interactively. Please visit often to see new additions. RIP Leonard Cohen, and thank you for the farewell masterpiece. Leonard Cohen’s farewell masterpiece: Whether this is goodbye or not, “You Want it Darker” is powerful and real. For two decades now, Leonard Cohen has been experiencing an Indian summer with almost no match in any art form. 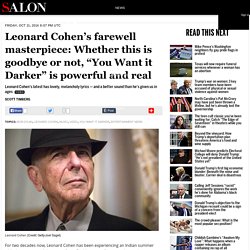 Besides a very few exceptions — jazz saxophonist Coleman Hawkins, composer Leos Janacek, novelists Philip Roth and Ursula Le Guin — has anyone turned out so much good work after the age of 60 or so? And despite Bob Dylan’s recent Nobel Prize for Literature, no one can argue that he’s doing better work now on par with his heyday in the 1960s and ’70s. Even the recent celebration of the great nonogenarian Chuck Berry has to stop short of claiming substantial output since his late ‘30s. Cohen, on the other hand, has been on a genuine roll. So the fact that Cohen has a new album at all is good news. It’s no surprise that Cohen, who is famous for crisp early songs like “Bird on a Wire” as well as more expansive, word-drunk numbers like “Famous Blue Raincoat,” has turned out another album with great lyrics. Untitled. Contents: Start with Staffs Playing Notes on the Keyboard Note Values and Rhythm Time Signatures Accidentals More about Note Valuesand Rhythm Intervals Minor Key Signaturesand Scales Structure. 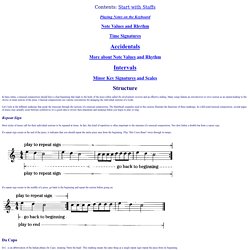 Dorian scale for guitar - GOSK. The Dorian scale, or mode, is the second of the seven musical modes. 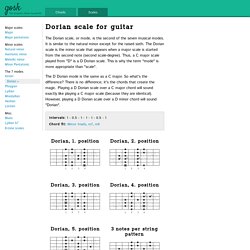 Notations 21: Musicians Visualize Sheet Music in Imaginative Ways Inspired by John Cage. By Maria Popova There’s something especially mesmerizing about the cross-pollination of the senses, particularly in visualizing music. 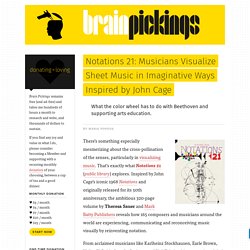 That’s exactly what Notations 21 (public library) explores. Inspired by John Cage’s iconic 1968 Notations and originally released for its 50th anniversary, the ambitious 320-page volume by Theresa Sauer and Mark Batty Publishers reveals how 165 composers and musicians around the world are experiencing, communicating and reconceiving music visually by reinventing notation. From acclaimed musicians like Karlheinz Stockhausen, Earle Brown, Halim El-Dabh, Joan La Barbara, and Yuji Takahashi to emerging global talent, this magnificent tome examines how both the technology and the expectations of this unique synesthetic language have changed over the past half-century. 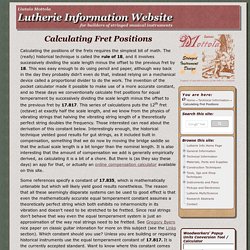 Popups must be enabled for this site. String vibration - Wikipedia. The Famous Circle of Fifths. How the Circle of 5ths Works A very simple tool for musicians of all stripes. Think of a clock, with C occupying the 12:00 position. Everything starts from C, since C is the key in which there are NO sharps or flats.

We move clockwise from C, each note is a fifth above the last. The Basics Of Guitar Music. Part I: The physics of sound, your guitar and theory of music in a nutshell “…Stevie was right here with me, studying me as I studied the music. Circle of Fifths for Jazz Guitar. The Circle of Fifths displays in graphic form the foundation of harmonic movement in jazz music. This interactive diagram shows chords grouped according key. Circle of fifths. Note names of musical notes keyboard piano frequencies = octave piano keys number tone tones 88 notes frequency names of all keys on a grand piano standard concert pitch tuning German English system MIDI 88.

The English and American scientific system versus the German systemScientific Pitch Notation (SPN), also known as American Standard Pitch Notation Notes and keyboard. Free printable staff paper @ Blank Sheet Music .net. Music Paper. Home. Guitar Chord Theory - The Crash Course. Home> Theory/ Chords> Chord Theory This series of guitar chord theory lessons will give you a crash course in how chords are constructed. I've spent a lot of time refining and condensing this course so you only learn what you really need to know. The benefits of learning chord theory Guitarists often learn chords by using chord charts, which is fine for knowing where to put your fingers, but it's also beneficial to understand what's happening "behind the scenes", the mechanics of why chords sound the way they do.

That way, you'll be able to get exactly the sound you want from your music. However, in my opinion, the main practical benefit of learning chord theory is that you'll see a clearer connection between scales and chords, as they're both made from the same building blocks (intervals). That's why, when guitarists ask me "how do I apply scales over chords? "