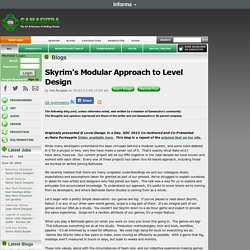 The thoughts and opinions expressed are those of the writer and not Gamasutra or its parent company. While many developers understand the basic concepts behind a modular system, and some have dabbled in it for a project or two, very few have made a career out of it. That’s exactly what Nate and I have done, however. Our current project will be our fifth together in the near-decade we have known and worked with each other. Every one of these projects has taken this kit-based approach, including those we worked on before joining Bethesda. We recently realized that there are many unspoken understandings we and our colleagues share; expectations and assumptions taken for granted as part of our process. Let's begin with a pretty simple observation: our games are big.

When you play a Bethesda game (or when you work on one) you know this going in. Unreal Engine 4 Info Graphics - Paul Neale. Blending textures with vertex colours (Colors if you prefer): A great way to reduce needed texture space is to use tileable textures across large areas of a mesh or multiple meshes. 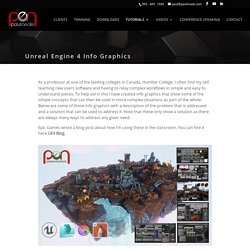 The problem with this is you can end up with what looks like a tiled texture that is reapeating over and over. You also don’t specific textures changes where you might want them. The example below is a road and I was looking to have gravel areas and areas where it looked more dry and cracked. Painting a single texture for the entire road would result in a massive texture having to load or ending up with obvious pieces of road looking exactly the same as the last. Vertex colours are now used as a mask, or layer mask in Photoshop, to blend the textures together where needed. Unreal Engine 4 Quality Written Tutorials. Crafting a Magician’s Studio Environment in UE4. Salvatore Gambino prepared a detailed breakdown of his Magician’s Studio made in UE4: blockout, circular modular system, ivy, stained glass, marble mosaic, and lighting setup. 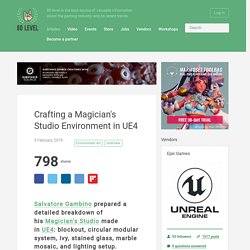 Introduction Hi, my name is Salvatore Gambino, I’m an Environment Artist for games. Originally from Palermo, Italy, I recently moved to Vancouver, Canada, where I pursued a 3D Diploma program at Think Tank Training Centre. 80. CGMA Student Project: Postwar Environment in UE4. Adrián Scolari did a breakdown of his UE4 scene Goodbye, Soldier based on Ricardo Barreiro and Juan Giménez‘s comics. 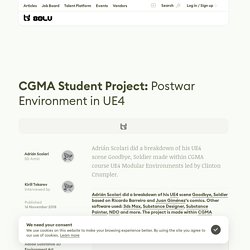 Other software used: 3ds Max, Substance Designer, Substance Painter, NDO and more. The project is made within CGMA course UE4 Modular Environments led by Clinton Crumpler. Introduction My name is Adrián Scolari, I’m from Argentina and I moved to Spain 18 years ago with one goal in mind: to work as a 3D artist for games. Over the years, I have worked on several projects for PC and mobile games like Asphalt 8, Asphalt Xtreme, War Leaders, and many others. Goodbye, Soldier: Start of the Project The scene Goodbye, Soldier is inspired by a short comic story called War III written by Ricardo Barreiro and Juan Giménez‘s art.

Since then I wanted to make a short film with it but, to be honest, it’s too much work for one guy. Creating Projectiles in Unity. Vladislav Horobets has recently shared a demoscene where users get a chance to shoot a wide range of beautiful stylized projectiles. 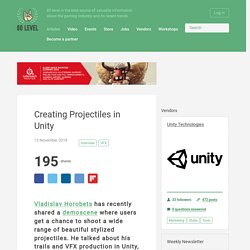 He talked about his trails and VFX production in Unity, and gave general advice for learners. Introduction Hi! My name is Vladislav Horobets, I’m also known under the nickname ErbGameArt. I’m from Ukraine, 21 years old. After school, I enrolled in Engineering and Management College NAU to study programming and then studied at National Aviation University. Recreating Barret from Final Fantasy VII. Hunter Mortenson talked about his stylized recreation of Barret from Final Fantasy VII with ZBrush, 3ds Max, and Substance Painter. 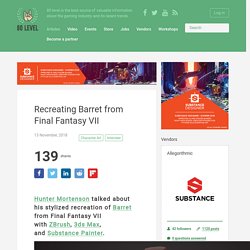 Introduction Hi, my name is Hunter Mortenson and I’m a character artist with a little over ten years experience in the game industry. I focus on stylized and/or hand-painted character art. I’m a self-taught artist that started learning 3D while in high school through art forums like polycount and the long dead cgchat.com. Most recently I worked in-house at Vigil Games as a character artist on Darksiders 2, but for the past few years I’ve made my living from the Dota 2 workshop on Steam and I’m currently also looking to expand into doing more freelance for some cool stylized projects.

Growing up I loved JRPGs like Final Fantasy 7, Xenogears, etc, so when I started learning 3D I was mostly doing fan arts of various Anime/Manga/JRPG characters. River Simulation in Houdini & UE4. Simon Trümpler (also known as Simon or Simonschreibt) explained how he created the river simulation in Houdini & Unreal and shared some valuable notes. 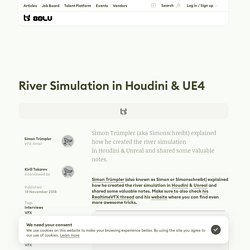 Make sure to also check his RealtimeVFX thread and his website where you can find even more awesome tricks. Preface You can download the Unreal and Houdini Assets here. Here’s an Installation video.For the major part of the project, I followed tutorials by Ben Schrijvers and Andreas Glad.Don’t be afraid of Nodes and Scripts. It’s not as hard as it may look.For the water, I used a normal-map from the Unreal Starter content. Low Poly Worlds - a good way to learn Blender and UE4. Game Development, like any other craft, can get overwhelming very easily. 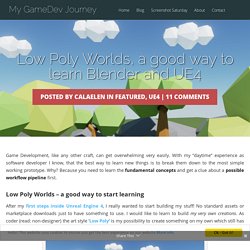 With my “daytime” experience as software developer I know, that the best way to learn new things is to break them down to the most simple working prototype. Why? Because you need to learn the fundamental concepts and get a clue about a possible workflow pipeline first. Low Poly Worlds – a good way to start learning After my first steps inside Unreal Engine 4, I really wanted to start building my stuff! This scene has only two different meshes. Interior Mapping: Rendering Real Rooms Without Geometry. Joost van Dongen allowed us to repost his article that explains a little rendering trick to help you generate the geometry for the interiors isn’t actually there similar to windows in Marvel’s Spider-Man. 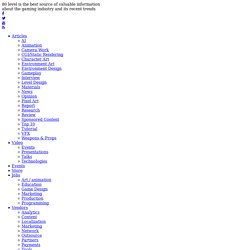 The recently released game Marvel’s Spider-Man has interiors behind windows in many buildings. This looks great and it seems to be done using a rendering trick: the geometry for the interiors isn’t actually there and is generated using a shader. Simulating a Jeep Driving Through Mud. Tim van Helsdingen did a breakdown of his sequence made with Houdini, Redshift, and Megascans, and talked about rigging a vehicle, simulating water, rain, mud, rendering heavy scenes, and more. 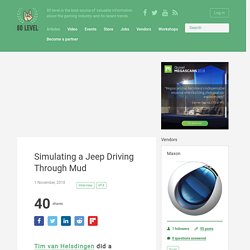 Introduction My name is Tim van Helsdingen. I am a freelance Houdini FX artist/Generalist based in the Netherlands. I started doing 3D around 2006, but I never really knew what to focus on. I literally tried everything for the first couple of years, from 2D animation to making games, from stop-motion to 3D/FX. 3D however was always the thing that I like the most, but it took me a while to find my speciality in this. Old Western General Store in UE4. Sven Mrđen shared some details behind his Old Western General Store inspired by Red Dead Redemption 2.

Software used: UE4, Blender, Substance Painter, and Substance Designer. Introduction Before anything else, I want to thank 80 level for giving me the opportunity to share my process with you. Setting Up One-Shot Sequences. Weiyo Sha presented his project prepared for a class on dynamic effects at Gnomon. The goal here was to finish a shot with dynamic effects by using FractureFX and PhoenixFD. The whole thing kind of reminds of a famous scene from X-Men. Thank you to my instructor J. Andres Berkstein for the help and advice. CGMA Student Project: A Spaceship. CGMA student Mark Hołubowski shared his experience of taking Hard Surface Modeling for Films course lead by Jay Machado and talked about the production of his spaceship model. Introduction My name is Mark Hołubowski and I’m a self-taught 3D artist. I was born in USA, California but raised in Poland. I’m currently trying to land my first job in the industry. Creating a Spooky Magical Environment.

Marcel Gorri did a breakdown of his final diploma project at Think Tank created with Maya, ZBrush, and V-Ray. My name is Marcel Gorri, I am a 3D Modeler, Texturer and Technical Artist from Brazil. I recently graduated from Think Tank Training Centre, specializing in creating Environments for Films. Setting Up Minimalistic Scenes in UE4. Vladimir Lepotic was kind enough to share a detailed breakdown of his Beton scene in UE4, providing tons of tricks on setting up the final look with lighting and additional effects. Introduction Hello, good people of 80 level. I am Vladimir Lepotic, a 3D Artist from Serbia. The path that led me to my current position of 3D artist was a mixture of different interests and searching for the right one, which, I believe, I found.

Modular Environments of The Council. Jean-Loup Moncanis shared some details on the production process behind environments of The Council by Big Bad Wolf Studio. Creating a Dungeon with Maya & Substance Designer. Creating a Lost Temple in UE4. Jonas Axelsson talked about his atmospheric environment Lost Temple Ruins made with UE4, Maya, and Substance Designer. 80. Setting Up Minimalistic Scenes in UE4. How to Build Portal VFX in UE4? VFX artist Niels Dewitte talked about the way he creates some awesome visual effects with Unreal Engine 4. Creating an Abandoned Mansion in UE4: Epic Breakdown.