Translating English protocol for a wider audience 20/06/2014 - NYTimes.com. Photo It was a breach of protocol few of the two billion viewers of the royal wedding would have spotted, but the etiquette expert Alexandra Messervy noticed the faux pas immediately. 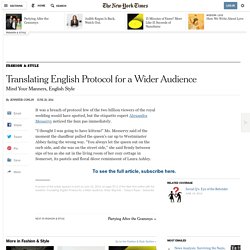 “I thought I was going to have kittens!” Ms. All the single ladies 02/07/2014 - NYTimes.com. Photo RALEIGH, N.C. — The decline of marriage over the last generation has helped create an emerging voting bloc of unmarried women that is profoundly reshaping the American electorate to the advantage, recent elections suggest, of the Democratic Party. 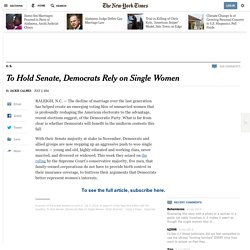 What is far from clear is whether Democrats will benefit in the midterm contests this fall. With their Senate majority at stake in November, Democrats and allied groups are now stepping up an aggressive push to woo single women — young and old, highly educated and working class, never married, and divorced or widowed. This week they seized on the ruling by the Supreme Court’s conservative majority, five men, that family-owned corporations do not have to provide birth control in their insurance coverage, to buttress their arguments that Democrats better represent women’s interests.

But the challenge for Democrats is that many single women do not vote, especially in nonpresidential election years like this one. Makeup of eligible voters Mr. Anti-immigration policy a factor in New-Zealand election 07/07/2014 - IBT. As New Zealand prepares for one of its toughest elections on September 20, political parties in the country are drafting their own anti-immigration policies in the hopes of attracting voters. 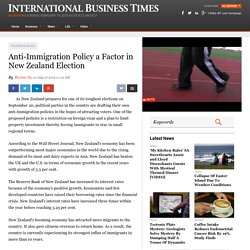 One of the proposed policies is a restriction on foreign visas and a plan to limit property investment thereby forcing immigrants to stay in small regional towns. According to the Wall Street Journal, New Zealand's economy has been outperforming most major economies in the world due to the rising demand of its meat and dairy exports in Asia. New Zealand has beaten the UK and the U.S. in terms of economic growth in the recent years with growth of 3.3 per cent.

The Reserve Bank of New Zealand has increased its interest rates because of the economy's positive growth. Economists said few developed countries have raised their borrowing rates since the financial crisis. New Zealand's booming economy has attracted more migrants to the country. Mind that drawl y'all 09/08/2014 - The Economist. What a difference a day makes with breast injections 20/08/2014 - NYTimes.com. Photo Before a romantic Caribbean weekend with her new boyfriend, Amanda Sanders decided she needed a little lift. 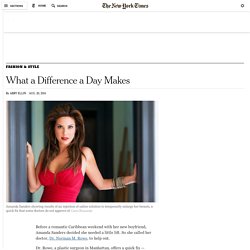 So she called her doctor, Dr. Norman M. Rowe, to help out. Dr. The procedure began as as a way for women seeking breast enhancement to determine how they might look if they chose surgery. Sizing up the Millennials 21/08/2014 - NYTimes.com. Photo Millennials have been called a lot of names. 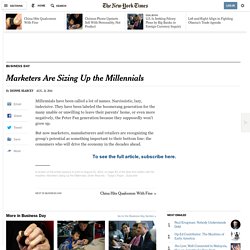 Narcissistic, lazy, indecisive. They have been labeled the boomerang generation for the many unable or unwilling to leave their parents’ home, or even more negatively, the Peter Pan generation because they supposedly won’t grow up. But now marketers, manufacturers and retailers are recognizing the group’s potential as something important to their bottom line: the consumers who will drive the economy in the decades ahead. Since the 1960s — the era of “Mad Men” — the baby boom generation, born between 1946 and 1964, has dominated corporate strategies behind selling nearly everything. But now young adults in their 20s are moving to surpass baby boomers as the largest age group, changing the way everything is sold, even breakfast drinks and mattresses. 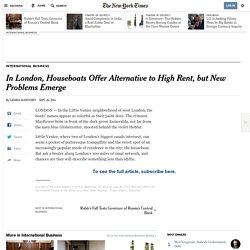 The crimson Mayflower bobs in front of the dark green Esmeralda, not far from the navy blue Globetrotter, moored behind the violet Hobbit. Little Venice, where two of London’s biggest canals intersect, can seem a pocket of picturesque tranquillity and the sweet spot of an increasingly popular mode of residence in the city: the houseboat. Hip and hobbling 27/09/2014 - The Economist. She liked the seaside before it was cool IN CHRISTCHURCH, a town on the south coast of England, the coffee shops are packed all day. 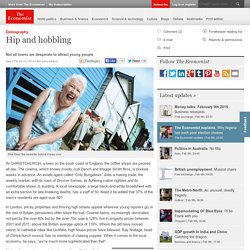 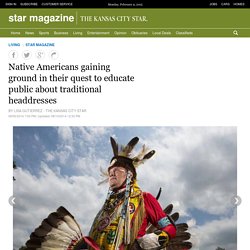 But the man in the headdress was singer Pharrell Williams, who is not, last time anyone knew, Native American. When that picture appeared on the July cover of fashion magazine Elle UK, which published June 5, the backlash on social media was instant. Immigration activists want answers from Clinton 26/10/2014 - NYTimes.com.

CHARLOTTE, N.C. — had just finished telling the crowd that North Carolina families could count on Senator Kay Hagan when the chants of Oliver Merino — a 25-year-old whose mother, an undocumented Mexican immigrant, faces deportation — grew louder. 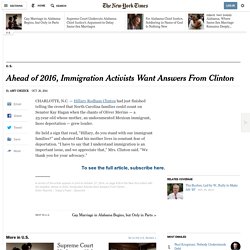 He held a sign that read, “Hillary, do you stand with our immigrant families?” And shouted that his mother lives in constant fear of deportation. “I have to say that I understand immigration is an important issue, and we appreciate that,” Mrs. Clinton said. “We thank you for your advocacy.” President Obama has promised executive action on immigration change after the midterm elections. The incident at a rally here on Saturday was only the latest time members of a group of young, undocumented immigrants who call themselves Dreamers have aggressively confronted Mrs. And now, the news 26/10/2014 - NYTimes.com. In an interview at Facebook’s sprawling headquarters here, which has a giant, self-driving golf cart that takes workers between buildings, Mr. 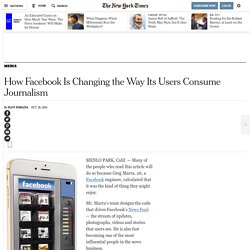 Marra said he did not think too much about his impact on journalism. “We try to explicitly view ourselves as not editors,” he said. “We don’t want to have editorial judgment over the content that’s in your feed. You’ve made your friends, you’ve connected to the pages that you want to connect to and you’re the best decider for the things that you care about.” In Facebook’s work on its users’ news feeds, Mr. Undefended no more 08/11/2014 - The Economist. A Place Where Lost Luggage Gets Another Shot 24/11/2014 - NYTimes.com. Ag-tech could change how the world eats 25/11/2014 - Mercurynews.com. TRACY -- Investors and entrepreneurs behind some of the world's newest industries have started to put their money and tech talents into farming -- the world's oldest industry -- with an audacious and ambitious agenda: to make sure there is enough food for the 10 billion people expected to inhabit the planet by 2100, do it without destroying the planet and make a pretty penny along the way.

Silicon Valley is pushing its way into every stage of the food-growing process, from tech tycoons buying up farmland to startups selling robots that work the fields to hackathons dedicated to building the next farming app. Blue River Technology CEO and co-founder Jorge Heraud at the Blue River Technology headquarters in Sunnyvale, Calif., on Thursday, Nov. 20, 2014. (LiPo Ching/Bay Area News Group) ( LiPo Ching ) "The food sector is wasteful and inefficient," said Ali Partovi, a Bay Area investor with large stakes in sustainable agriculture startups. For Cubans in Miami, the Gulf to Their Homeland Narrows 20/12/2014 - NYTimes.com. Photo MIAMI — Over a half-century, they have transformed what had been a sleepy, heat-drenched Southern town, infusing it with the rat-a-tat patter of Spanish in boardrooms and restaurants, the Cuban rhythms blasting from car radios, the linen guayaberas men don for parties and work, and the smells of mojo and picadillo wafting in the air.

Beyond that, Cubans fleeing their island have helped turn Miami into an economic powerhouse, the capital of Latin America and a center of Hispanic political power in the United States. Isabel De Lara, a 65-year-old former banker, arrived alone here at the age of 12 in 1961, put on a plane by fearful parents determined to get her out of Cuba after Fidel Castro’s revolution. Jose Antonio Lorenzo, 61, boarded one of an armada of boats in 1980, joining other desperate Cubans in the Mariel boatlift. Alicia Garcia, 43, almost died during her voyage in a rickety raft in the “balsero” wave of 1994. Continue reading the main story Slide Show Ms. Mightily different 15/01/2015 - The Economist. Cheating with "The Good Wife" 13/02/2015 - NYTimes.com.

Photo Like many couples, Jed Kolko and Eric Rice like to watch their favorite television programs together. The hardest part is hitting the play button at the same time. Two of their favorite series are “Mad Men” and “The Good Wife.” They prefer to watch their shows soon after the broadcast to avoid online spoilers. But Mr. The simple act of gathering around a TV set to share the experience of watching a program together feels increasingly quaint. 10 things you need to know about fracking 30/01/2015 - The Independent.

Public opposition and concerns about local impacts have meant there has been no fracking in Britain since a temporary ban was lifted in 2012. Today Scotland has announced a moratorium on fracking, while Lancashire Council - where proposals for fracking are at their most advanced – has delayed its decision on whether to allow fracking once again. Meanwhile the fracking industry is facing mounting scientific evidence pointing to health, environment and climate concerns. Speaking in Game of Thrones 11/02/2015 - The Independent. During filming, cast members, such as Emilia Clarke, are sent scripts and audio recordings by Peterson as they prep for the subtitled scenes. It was Peterson who decided that there would be no Dothraki word for "thank you" and that there would be seven different words for "striking someone with a sword".

Among them: hliziﬁkh, a wild but powerful strike; hrakkarikh, a quick and accurate strike; and gezrikh, a decoy strike. Dothraki is far and away Peterson's best-known "conlang" (constructed language – call Klingon, Elvish or Na'vi a "made-up" or "pretend" language and you risk the wrath of "conlangers" the world over) but he caught the bug after being introduced to Esperanto during his masters in linguistics at Berkeley, and now has a string of languages under his belt – or at least on his website.