Concerns over Ukraine in Estonia’s Russian speaking community. "People here want to live in an independent Estonia, not in some kind of 'New Russia'" Since the events in Ukraine, the Estonian government has pushed for an increased NATO presence in the north east of the country. 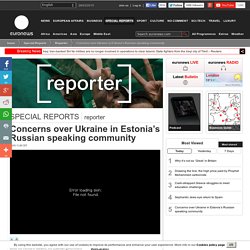 This small Baltic republic is nervous. Politicians and citizens are starting to ask some uncomfortable questions: will the Kremlin try to destabilize Estonia too? And will the country’s large Russian minority remain loyal to Estonia? Those questions are particularly pertinent in Narva, a city just over the border from Russia. The Estonian armed forces are made up not just of Estonians but also ethnic Russians, some of whom speak mainly Russian. Lieutenant Nikolai Predbannikov is a Russian speaker. The Singing Revolution, a documentary film. Most people don’t think about singing when they think about revolution. 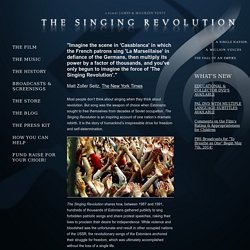 But song was the weapon of choice when Estonians sought to free themselves from decades of Soviet occupation. The Singing Revolution is an inspiring account of one nation’s dramatic rebirth. It is the story of humankind’s irrepressible drive for freedom and self-determination. The Singing Revolution shares how, between 1987 and 1991, hundreds of thousands of Estonians gathered publicly to sing forbidden patriotic songs and share protest speeches, risking their lives to proclaim their desire for independence.

Why Populism Is Here To Stay. Since Roman times, virtually every type of government that holds competitive elections has experienced some form of populism -- some attempt by ambitious politicians to mobilize the masses in opposition to an establishment they depict as corrupt or self-serving. 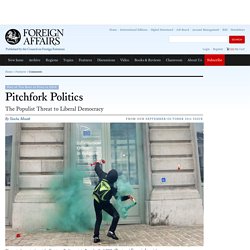 From Tiberius Gracchus and the populares of the Roman Senate, to the champions of the popolo in Machiavelli’s sixteenth-century Florence, to the Jacobins in Paris in the late eighteenth century, to the Jacksonian Democrats who stormed nineteenth-century Washington -- all based their attempts at mass mobilization on appeals to the simplicity and goodness of ordinary people. By the mid-twentieth century, populism had become a common feature of democracy. As the political scientists Seymour Martin Lipset and Stein Rokkan famously observed, during the postwar years, the party structures of North America and western Europe were “frozen” to an unprecedented degree. To continue reading, please log in. 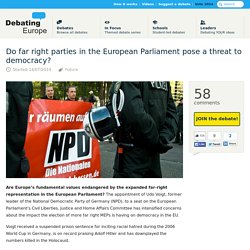 The appointment of Udo Voigt, former leader of the National Democratic Party of Germany (NPD), to a seat on the European Parliament’s Civil Liberties, Justice and Home Affairs Committee has intensified concerns about the impact the election of more far right MEPs is having on democracy in the EU. 2014/10/16 Should Europe's politicians start listening to the "populists"? — Debating Europe. On 9 October 2014, leading European politicians, civil society actors, business leaders and policy-makers gathered in Brussels for the annual State of Europe roundtable. 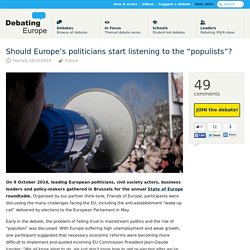 Organised by our partner think-tank, Friends of Europe, participants were discussing the many challenges facing the EU, including the anti-establishment “wake-up call” delivered by elections to the European Parliament in May. Early in the debate, the problem of falling trust in mainstream politics and the rise of “populism” was discussed. With Europe suffering high unemployment and weak growth, one participant suggested that necessary economic reforms were becoming more difficult to implement and quoted incoming EU Commission President Jean-Claude Juncker: “We all know what to do, we just don’t know how to get re-elected after we’ve done it.” However, is it wrong to blame “populism” for Europe’s problems? We had a comment sent in by Wouter arguing that the real problem is that politicians aren’t listening to voters: 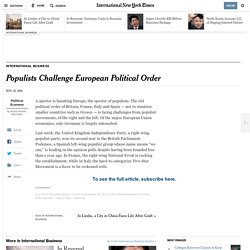 The old political order of Britain, France, Italy and Spain — not to mention smaller countries such as Greece — is facing challenges from populist movements, of the right and the left. Of the major European Union economies, only Germany is largely untouched.

The Guardian view of Europe’s populists: left or right, they are united by a worrying xenophobia. With Syriza in power in Athens, and Podemos showing its strength on the streets of Madrid, there is a growing sense that a southern coalition of anti-austerity parties in Europe will overturn the existing dogma of economic discipline, largely upheld by Brussels and the north. 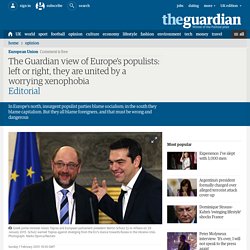 There is cause to rejoice in the fact that stringent belt-tightening is now being questioned as the best way to pull Europe out of its doldrums. The problem with populism. The recent electoral success of leftwing populist parties such as Syriza in Greece and Podemos in Spain has given a new impulse to the debate on populism in Europe. 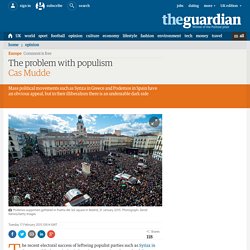 Until now, populism was almost exclusively linked to the radical right, leading to an incorrect conflation of populism and xenophobia. Life in the Land of Britain's UKIP Party. CLACTON-ON-SEA, England—In 1964, as Britain experienced an influx of Asian and African post-colonial immigrants, Conservative Party member Peter Griffiths was controversially elected to parliament, winning on the slogan, “If you want a nigger for a neighbour, vote Labour.” 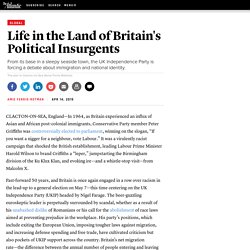 It was a virulently racist campaign that shocked the British establishment, leading Labour Prime Minister Harold Wilson to brand Griffiths a “leper,” jumpstarting the Birmingham division of the Ku Klux Klan, and evoking ire—and a whistle-stop visit—from Malcolm X. Fast-forward 50 years, and Britain is once again engaged in a row over racism in the lead-up to a general election on May 7—this time centering on the UK Independence Party (UKIP) headed by Nigel Farage.

Rightist Movements - Transform Network. Debating Europe – Discuss YOUR ideas with Europe’s leaders. 14/04/2014 Do young Europeans want to travel or is the crisis forcing them to leave? — Debating Europe. Young Europeans are fed up with national politics and the failure of governments to respond effectively to the crisis. 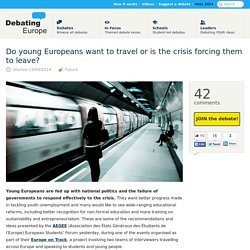 They want better progress made in tackling youth unemployment and many would like to see wide-ranging educational reforms, including better recognition for non-formal education and more training on sustainability and entrepreneurialism. These are some of the recommendations and ideas presented by the AEGEE (Association des États Généraux des Étudiants de l’Europe) European Students’ Forum yesterday, during one of the events organised as part of their Europe on Track, a project involving two teams of interviewers travelling across Europe and speaking to students and young people.

06/10/2014 Is the idea of world peace an impossible dream? — Debating Europe. The First World War was supposed to be the “war to end war”. One hundred years ago, millions were dying in one of the deadliest conflicts in history. Machine guns, barbed wire and poison gas brought innovative new ways of brutalisig our neighbours. 20/10/2014 Are young Europeans becoming racist and bigoted? - Are Europeans becoming racist? — Debating Europe. “United in Diversity” is the official motto of the European Union. Despite this, Eurostat polling suggests that only 22% of European citizens think the EU really represents “cultural diversity”. In 2014, are Europeans less united by diversity than the founders of the EU might have hoped? In recent years, anti-immigration parties across the EU have been riding a wave of popular anger (including in the European Parliament elections in May) and the mainstream political discourse has been growing increasingly focused on “cracking down” and getting “tough” on immigration.

Far-right parties argue that this is just a sign that “common sense” attitudes are finally prevailing. Are they right? Nobody disputes that huge changes are taking place in cities and neighbourhoods across Europe today. In other words: European society is growing older, with fewer young people of working age to support a growing population of retired people. Many people see greater cultural diversity as a positive thing.

22/10/2014 Is youth unemployment the biggest threat facing Europe? - Should governments create more jobs to boost the economy? — Debating Europe. One fifth of young people in the European Union are currently without a job. However, at an EU summit on jobs and growth in Milan earlier this month (8 October), the leaders of Germany, France and Italy each left empty-handed, failing to agree on any new measures to help combat unemployment. Youth organisations criticised the summit as nothing more than “an opportunity for politicians to meet and make it appear like there was action.” 26/11/2014 Is renewable energy sustainable or just a waste of money? — Debating Europe. The 2014 United Nations Climate Change Conference (COP20) in Lima, Peru, is the last UN climate summit before the meeting in Paris 2015, when governments hope to agree to a global legal framework setting binding targets to reduce CO2 emmissions.

Leaders will be desperate to avoid another disappointment along the lines of the climate summit in Copenhagen in 2009, when an ambitious global agreement failed to materialise despite high expectations. Ahead of the Lima climate summit, the European Union agreed to the 2030 Framework for Climate and Energy, setting binding EU targets for 2030 of at least 40% reduction of greenhouse gas emissions, at least 27% of energy used by the EU being generated by renewables, and an energy efficiency increase of at least 27%. Proponents argue that setting tough climate targets will spur a sustainable, green growth boom in Europe, creating hundreds of thousands of jobs and boosting innovation. Is “green energy” really as green as advertised?

Should English be the only official language of the EU?

Marijuana Industry in Colorado 05/02/2015 - NYTimes.com. Continue reading the main story Video It was zero degrees in Denver on a late December morning, and the ice-covered streets were mostly empty. Mark Mason, wearing a full-length black coat, green wool hat and sunglasses, sat in a white Buick LaCrosse, eyeing the squat building across the street. It was the local branch of the Federal Reserve Bank. “Behind that gate, that’s where the armored cars come in,” he said, pointing to a parking lot. In Australia's outback 04/01/2015 - LA Times. After a Spa Day, Looking Years Younger 02/01/2015 - NYTimes.com. AURORA, Colo. — It was a day out at the spa for Paige Ehresman and her closest friends.

The First HIV/AIDS Generation Reaches Retirement Age 18/09/2014 - Newsweek. Bill Fauber keeps a Post-it pad in every room of his pristine Palm Springs condo. Each afternoon, his metal stairway banister fills up with a line of bright yellow, pink, green and orange stickies reminding him to buy eggs, call his doctor, take his HIV medications, fix the ceiling, clean the pool, call a friend. At day’s end, he gathers all of the notes and compiles a list of unfinished tasks on a single slip. “I might remember something now, and in five seconds I will forget,” says Fauber, 66. Islamic, yet integrated 06/09/2014 - The Economist. Vocable All English (2014-2015) Correspondances européennes.

When Men Are the Loudest Feminists. It’s Not Just You. Feminism Does Seem To Be Getting Weirder. Waste Accumulation (2013-2014)