Can eBooks Satisfy? Creating Content for ICT-enabled Classrooms. Wayan Vota During the Human Development Network webinar, “eBooks & Affordable Access to Digital Content for Teachers, Health Care Workers & Agricultural Extension Agents in Southern Africa“, which looked at lessons from the IADP Affordable Access Initiative Partnership with African Universities, a sidebar conversation came about on the instant message board that was associated with the webinar. 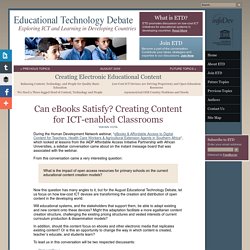 From this conversation came a very interesting question: What is the impact of open access resources for primary schools on the current educational content creation models? Now this question has many angles to it, but for the August Educational Technology Debate, let us focus on how low-cost ICT devices are transforming the creation and distribution of open content in the developing world. Will educational systems, and the stakeholders that support them, be able to adapt existing and new content onto these devices? eReaders will transform the developing world – in and outside the classroom. David Risher If Worldreader’s experience so far is any guide, e-readers are set to transform the developing world, both in – and outside the classroom. 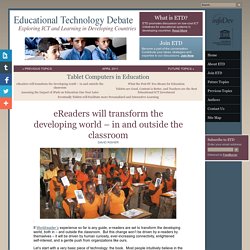 But this change won’t be driven by e-readers by themselves – it will be driven by human curiosity, ever-increasing connectivity, enlightened self-interest, and a gentle push from organizations like ours. Let’s start with a very basic piece of technology: the book. ICT Competency Framework for Teachers. InfodevDocuments_154.pdf. Worst practice in ICT use in education. In business and in international development circles, much is made about the potential for 'learning from best practice'. 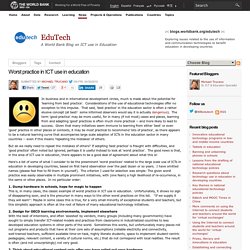 Considerations of the use of educational technologies offer no exception to this impulse. That said, 'best practice' in the education sector is often a rather elusive concept (at best! Some informed observers would say it is actually dangerous). The term 'good practice' may be more useful, for in many (if not most) cases and places, learning from and adapting 'good' practices is often much more practical -- and more likely to lead to success. Given that many initiatives seem immune to learning from either 'best' or even 'good' practice in other places or contexts, it may be most practical to recommend 'lots of practice', as there appears to be a natural learning curve that accompanies large scale adoption of ICTs in the education sector in many countries -- even if this means 'repeating the mistakes' of others. 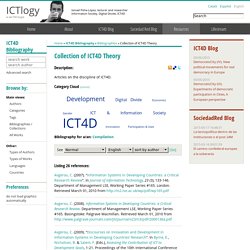 Bibliography for a/an: Compilation Listing 26 references: Avgerou, C. (2009). “Discourses on Innovation and Development in Information Systems in Developing Countries’ Research”. DiMaggio, P., Hargittai, E., Celeste, C. & Shafer, S. (2004). Zheng, Y. & Stahl, B.C. (2010). A World Bank Blog on ICT use in Education. In my experience working with education officials around the world over the past two decades, the confidence of senior leadership in an education system's approach to computer and data security is often inversely proportional to how much time, energy and expense have been devoted to considering security issues, to say nothing of the robustness and comprehensiveness of related approaches being deployed. 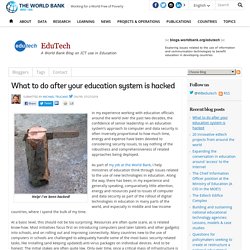 As part of my job at the World Bank, I help ministries of education think through issues related to the use of new technologies in education. Along the way, there has been, in my experience and generally speaking, comparatively little attention, energy and resources paid to issues of computer and data security as part of the rollout of digital technologies in education in many parts of the world, and especially in middle and low income countries, where I spend the bulk of my time. At a basic level, this should not be too surprising. Resources are often quite scare, as is related know-how. ICTs for Development. Actor-network theory (ANT) has been around since the 1980s, and significantly utilised in some disciplines, such as information systems. 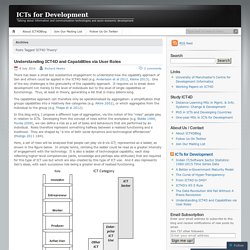 But – oddly – it has hardly been applied at all in development studies, including within ICT4D research. That is recently starting to change but to give some further impetus, we organised an international workshop in June 2011: “Understanding Development Through Actor-Network Theory”. You can find online a working paper series derived from the workshop. Actor-network theory began as a means to explain how science works, such as the operation of scientific laboratories and projects. However, it has subsequently grown to be seen as a full-blown social theory. Technology tools to improve education access and quality for refugees, returnees, and stateless persons.

The iREAD (Impact on Reading of E-Readers And Digital content) Ghana Study is a pilot study spanning from October 2010 to July 2011. 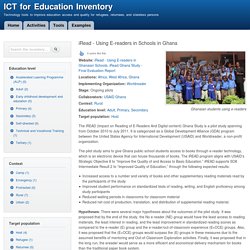 It is categorized as a Global Development Alliance (GDA) program between the United States Agency for International Development (USAID) and Worldreader, a non-profit organization. The pilot study aims to give Ghana public school students access to books through e-reader technology, which is an electronic device that can house thousands of books. The iREAD program aligns with USAID’s Strategic Objective 8 to “Improve the Quality of and Access to Basic Education.” iREAD supports SO8 Intermediate Result 2 to “Improved Quality of Education,” through the following expected results: Hypotheses: There were several major hypotheses about the outcomes of the pilot study.