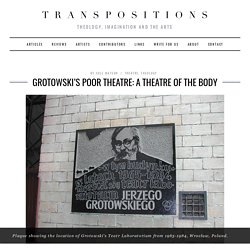 In the first part of this three-part series on the Rhapsodic Theatre and the Laboratory Theatre, I introduced the theological underpinnings of the Rhapsodic Theatre, associated with Karol Wojtyła and Mieczysław Kotlarczyk. In this second part, I will introduce the theology of Jerzy Grotowski’s Poor Theatre, the theatrical concept which he explored in his Laboratory Theatre. In the final part, I will compare the two, to ask whether the two approaches can inform each other.

Polish theatre director Jerzy Grotowski described his mission as the creation of ‘a secular sacrum in the theatre…’[1] In Peter Brook’s preface to Grotowski’s Towards a Poor Theatre, Brook describes Grotowski’s work with the Laboratory Theatre as the search for ‘a new Mass’, noting that Grotowski’s ‘tradition is Catholic – or anti-Catholic; in this case the two extremes meet’.[2] a ‘secular holiness’. 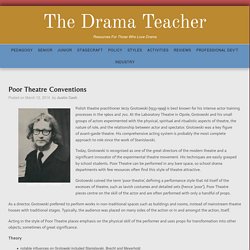 At the Laboratory Theatre in Opole, Grotowski and his small groups of actors experimented with the physical, spiritual and ritualistic aspects of theatre, the nature of role, and the relationship between actor and spectator. Grotowski was a key figure of avant-garde theatre. His comprehensive acting system is probably the most complete approach to role since the work of Stanislavski. Today, Grotowski is recognised as one of the great directors of the modern theatre and a significant innovator of the experimental theatre movement. His techniques are easily grasped by school students. The Movements: The Theatre of Cruelty. Antonin Artaud is the father of cruelty – the gut-wrenching, spine-squirming discomfort that only a direct confrontation with physical reality can produce. 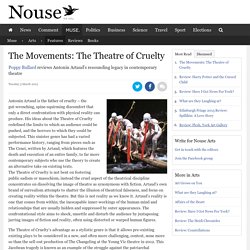 His ideas about the Theatre of Cruelty redefined the limits to which an audience could be pushed, and the horrors to which they could be subjected. This sinister genre has had a varied performance history, ranging from pieces such as The Cenci, written by Artaud, which features the death and execution of an entire family, to far more contemporary subjects who use the theory to create an alternative take on existing texts. Experimental theatre. Epic Theatre - Drama Online.

In the Poetics Aristotle drew a distinction between tragedy and epic, though conceding that they had much in common. 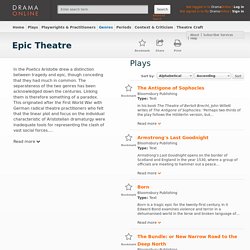 The separateness of the two genres has been acknowledged down the centuries. Linking them is therefore something of a paradox. This originated after the First World War with German radical theatre practitioners who felt that the linear plot and focus on the individual characteristic of Aristotelian dramaturgy were inadequate tools for representing the clash of vast social forces. They also rejected naturalism as providing too limited an angle of vision for revolutionary times. The term ‘epic theatre’ was coined by the left-wing director Erwin Piscator in the early 1920s. Dramatic genre. Epic theatre, ( German: episches Theater) form of didactic drama presenting a series of loosely connected scenes that avoid illusion and often interrupt the story line to address the audience directly with analysis, argument, or documentation. 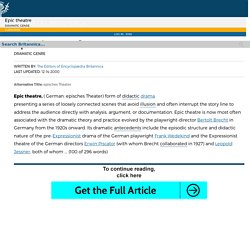 Epic theatre is now most often associated with the dramatic theory and practice evolved by the playwright-director Bertolt Brecht in Germany from the 1920s onward. Its dramatic antecedents include the episodic structure and didactic nature of the pre-Expressionist drama of the German playwright Frank Wedekind and the Expressionist theatre of the German directors Erwin Piscator (with whom Brecht collaborated in 1927) and Leopold Jessner, both of whom ... (100 of 296 words)

5C Epic Theatre Slides. BBC Bitesize - GCSE Drama - Epic theatre and Brecht - Revision 1. Augusto Boal: Aesthetics and Human Becoming. The Brazilian playwright, director and political activist Augusto Boal is credited with formulating one of the most radical forms of theatre ever devised, the Theatre of the Oppressed. 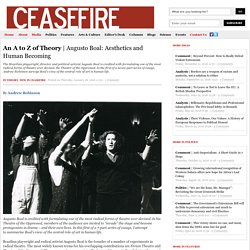 In the first of a seven-part series of essays, Andrew Robinson surveys Boal's view of the central role of art in human life. By Andrew Robinson Augusto Boal is credited with formulating one of the most radical forms of theatre ever devised. In his Theatre of the Oppressed, members of the audience are invited to “invade” the stage and become protagonists in drama – and their own lives. Constantin Stanislavski – Theatre Links. Konstantin Sergeievich Stanislavski (17 January [O.S. 5 January] 1863 – 7 August 1938) was a Russian actor and theatre director. 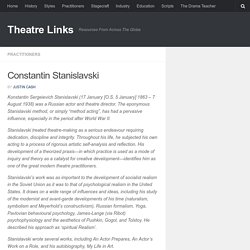 The eponymous Stanislavski method, or simply “method acting”, has had a pervasive influence, especially in the period after World War II. Stanislavski treated theatre-making as a serious endeavour requiring dedication, discipline and integrity. Stanislavsky system. Realism and Naturalism Theatre Conventions. One of the more confusing aspects of theatre history and performance styles for teachers and students is the differences between realism and naturalism. 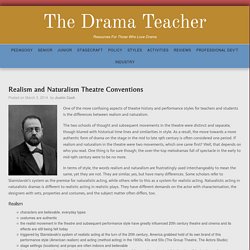 The two schools of thought and subsequent movements in the theatre were distinct and separate, though blurred with historical time lines and similarities in style. As a result, the move towards a more authentic form of drama on the stage in the mid to late 19th century is often considered one period. BBC Bitesize - GCSE Drama - Naturalism and Stanislavski - Revision 3.