Sport Performance. Sport performance is the manner in which sport participation is measured. 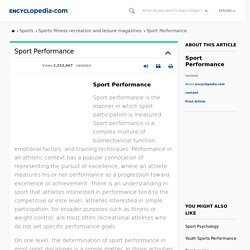 Sport performance is a complex mixture of biomechanical function, emotional factors, and training techniques. Performance in an athletic context has a popular connotation of representing the pursuit of excellence, where an athlete measures his or her performance as a progression toward excellence or achievement. There is an understanding in sport that athletes interested in performance tend to the competitive or elite level; athletes interested in simple participation, for broader purposes such as fitness or weight control, are most often recreational athletes who do not set specific performance goals. On one level, the determination of sport performance in most sport disciplines is a simple matter. Sports#:~:text=Sport psychology is a proficiency,with sports settings and organizations. What Is Sports Psychology? What Is Sports Psychology? 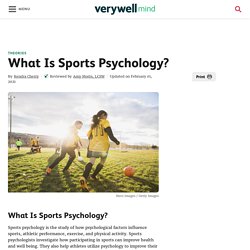 Sports psychology is the study of how psychological factors influence sports, athletic performance, exercise, and physical activity. Sports psychologists investigate how participating in sports can improve health and well being. They also help athletes utilize psychology to improve their sports performance and mental well-being. They don't just work with elite and professional athletes, however. They also help regular people learn how to enjoy sports and learn to stick to an exercise program. What Is Exercise Psychology and Sport Psychology? Exercise psychology and sport psychology involve the scientific study of the psychological factors that are associated with participation and performance in sport, exercise and other types of physical activity. 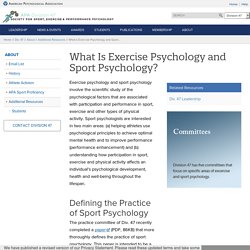 Sport psychologists are interested in two main areas: (a) helping athletes use psychological principles to achieve optimal mental health and to improve performance (performance enhancement) and (b) understanding how participation in sport, exercise and physical activity affects an individual's psychological development, health and well-being throughout the lifespan. The practice committee of Div. 47 recently completed a paper (PDF, 86KB) that more thoroughly defines the practice of sport psychology. Sport and exercise psychologists. Sport Psychology for Sport Coaches: What you need to know. Mental visualization is a key sport psychology skill that coaches can help their athletes develop. 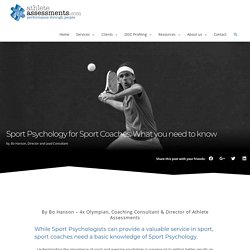 This may entail specific training sessions that practice mental visualization of the perfect execution of technique or practicing the race or game plan. It can also be as simple as a few minutes of visualization before practice commences. Before a training session, coaches can ask their athletes to think about what it is they are about to do and then see themselves performing the training effectively. Visualization often requires an athlete to firstly relax, mentally focus on the present and then run through what is to be rehearsed in their mind.

If a coach isn’t yet confident in being able to run visualization sessions with their athletes, then engage a sport psychologist to teach and mentor the coach on how to do this well. Another sport psychology area that is relatively simple but vitally important is goal setting. Sport Australia. Ohio Center for Sport Psychology. Jack J. Lesyk, Ph.D. You don’t have to be a professional athlete or an Olympic champion to be a successful athlete. Nor do you have to have a room full of trophies, win a state championship, or make the front page of the sports section. Successful athletes that I’ve worked with include an eleven year-old figure skater who has not yet won a competition, a high school golfer with a zero handicap, a middle-aged runner whose goal is to complete her first marathon, a weight lifter who holds several world records, and an Olympic medalist. What these athletes have in common is that their sport is important to them and they’re committed to being the best that they can be within the scope of their limitations – other life commitments, finances, time, and their natural ability.

There are nine, specific mental skills that contribute to success in sports. A Brief List of the Nine Mental Skills Successful Athletes: Choose and maintain a positive attitude. Mental Skills Training The Performance Pyramid. Sports Psychology - Anxiety in athletes. EJ1177001 - Investigation of Proactive Personality Characteristics of the Students of High School of Physical Education and Sports through Various Variables, Asian Journal of Education and Training, 2018. 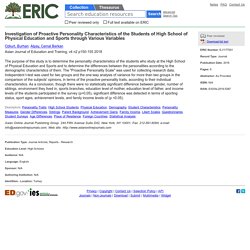 The "Proactive Personality Scale" was used for collecting research data. Independent t-test was used for two groups and the one-way analysis of variance for more than two groups in the comparison of the subjects' opinions, in terms of the proactive personality traits, according to their individual characteristics. As a conclusion, though there were no statistically significant difference between gender, number of siblings, environment they lived in, sports branches, education level of mother, education level of father, and income levels of the students participated in the survey (p>0,05), significant difference was detected in terms of sporting status, sport ages, achievement levels, and family income levels of (p <0.05).

Sport Competition Anxiety Test (SCAT) By analysing an athlete's responses to a series of statements about how she/he feels in a competitive situation, it is possible to determine their level of anxiety. 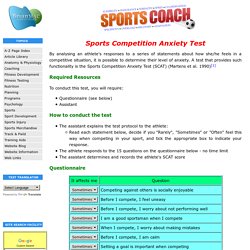 A test that provides such functionality is the Sports Competition Anxiety Test (SCAT) (Martens et al. 1990)[1] Required Resources To conduct this test, you will require: Questionnaire (see below) Assistant How to conduct the test. Sports Performance Analysis & Sports Coding. Use of functional performance tests in sports: Evaluation proposal for football players in the rehabilitation phase. Tests for the Assessment of Sport-Specific Performance in Olympic Combat Sports: A Systematic Review With Practical Recommendations. Introduction Amateur boxing, fencing, karate, judo, taekwondo, and wrestling represent popular combat sports. 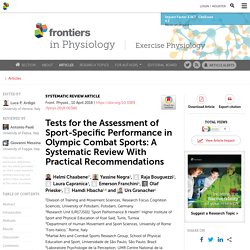 These combat sports are practiced in the whole world and constitute an important part of the Summer Olympic programme (International Olympic Committee, 2017a). Wrestling and fencing were already part of the first modern Olympic Games in 1896 for males. Females were included in 1924 for fencing and in 2004 for wrestling. In 1904, male amateur boxing was included in the official program of the Summer Olympic Games. Sport Personality Questionnaire. The SPQ20 sport psychology assessment test provides information about an athlete's personality and mental skills. 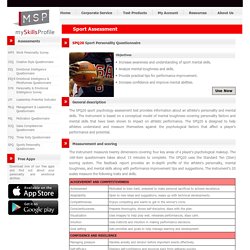 The instrument is based on a conceptual model of mental toughness covering personality factors and mental skills that have been shown to impact on athletic performance. The SPQ20 is designed to help athletes understand and measure themselves against the psychological factors that affect a player's performance and potential. The instrument measures twenty dimensions covering four key areas of a player's psychological makeup. The 168-item questionnaire takes about 15 minutes to complete. The SPQ20 uses the Standard Ten (Sten) scoring system. The internal consistency reliabilities of the scales range from 0.7 to 0.8 with a median of 0.7.

The instrument's norms are based on a large international comparison group of 9,000 respondents. If you are an individual who wants to do a single assessment, click on the button below to start the assessment. Using psychological tests to enhance skills in sport and performing arts. Personality Tests and Sports. Personality is typically defined as a person’s distinctive and enduring (i.e., cross-situational) thoughts, emotions, and behaviors that characterize the person’s reactions to life situations. 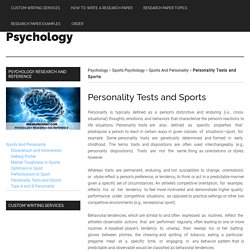 Personality traits are also defined as specific properties that predispose a person to react in certain ways in given classes of situations—sport, for example. Some personality traits are genetically determined and formed in early childhood. The terms traits and dispositions are often used interchangeably (e.g., personality dispositions). Traits are not the same thing as orientations or styles, however. Whereas traits are permanent, enduring, and not susceptible to change, orientations or styles reflect a person’s preference, or tendency, to think or act in a predictable manner given a specific set of circumstances.

An example of one of these characteristics is mental toughness, which has gained great interest by SP researchers in recent years. Poor Prediction Rates. Personality and sport performance: The role of perfectionism, Big Five traits, and anticipated performance in predicting the results of distance running competitions. Highlights We conducted two studies on athletes taking part in street runs (10 km and half-marathon). 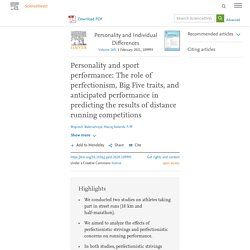