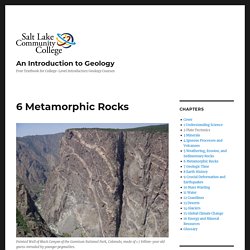 Peter Davis, Pacific Lutheran University Describe the temperature and pressure conditions of the metamorphic environmentIdentify and describe the three principal metamorphic agentsDescribe what recrystallization is and how it affects mineral crystalsExplain what foliation is and how it results from directed pressure and recrystallizationExplain the relationships among slate, phyllite, schist, and gneiss in terms of metamorphic gradeDefine index mineralExplain how metamorphic facies relate to plate tectonic processesDescribe what a contact aureole is and how contact metamorphism affects surrounding rockDescribe the role of hydrothermal metamorphism in forming mineral deposits and ore bodies Metamorphic rocks, meta- meaning change and –morphos meaning form, is one of the three rock categories in the rock cycle (see Chapter 1). 6.1.1 Temperature (Heat) Temperature measures a substance’s energy—an increase in temperature represents an increase in energy . 6.1.3 Fluids.

Properties of Minerals. Geologists have recently determined that the minerals goethite and hematite exist in abundance on Mars, sure signs of the presence of water (see Figure 1 for a picture). 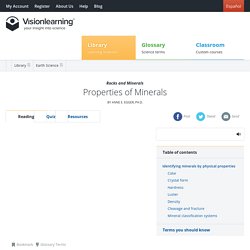 The most common minerals in Earth's crust can often be identified in the field using basic physical properties such as color, shape, and hardness. Comprehension Checkpoint. USGS Schoolyard Geology. ...until you stop moving the pieces. 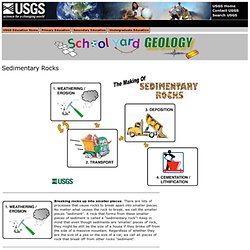 Once the sediment stops being transported, you have a bunch of pieces of sediment in one place. A pile of sand is an example; you might find such a pile at a sandbar along the edge of a river. Rock Key. The Rock Identification Key - by Don PeckRock Key Table of Contents What Are Rocks? 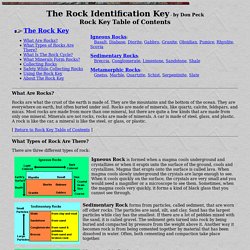 Rocks are what the crust of the earth is made of. They are the mountains and the bottom of the ocean. They are everywhere on earth, but often buried under soil. Rocks are made of minerals, like quartz, calcite, feldspars, and micas. Most rocks are made from more than one mineral, but there are quite a few kinds that are made from only one mineral. Earth Materials Outline. Making Ramen All we have to work with in sustaining our world: Earth’s Raw Materials 1.

Composition of the Continental Crust O- Oxygen 47% Si- Silicon 28% These together = 75% of continental crust... 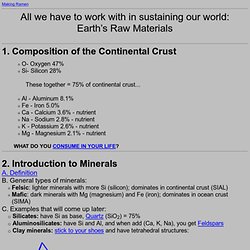 Different environments of formation, and the cooling rates associated with these, create very different textures and define the two major groupings within igneous rocks: Volcanic rocksVolcanic rocks form when magma rises to the surface and erupts, either as lava or pyroclastic material. 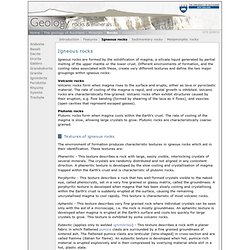 An igneous rock is formed by the cooling and crystallization of molten rock. 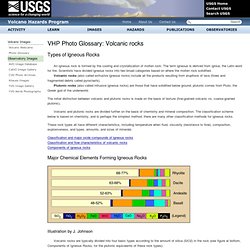 The term igneous is derived from ignius, the Latin word for fire. Scientists have divided igneous rocks into two broad categories based on where the molten rock solidified. Brooklyn College - Core 3.32 - Geology. Metamorphic Rocks Metamorphic rocks are the result of the transformation of a pre-existing rock type, the protolith, in a process called metamorphism, which means "change in form ".The protolith is subjected to heat and pressure (temperatures greater than 150 to 200 °C and pressures of 1500 bars) causing profound physical and/or chemical change. 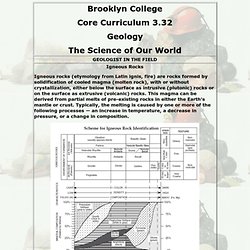 The protolith may be sedimentary rock, igneous rock or another older metamorphic rock. STRATA Terminology. Sediment deposition and reworking associated with storms (tempestites) and turbidite currents (turbidites) are unpredictable, sudden, and catastrophic. 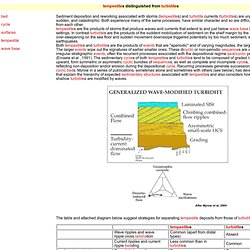 Both experience many of the same processes, have similar character and so are difficult to distinguish from each other. Tempestites are the products of storms that produce waves and currents that extend to and just below wave base in shallow shelf settings. In contrast turbidites are the products of the suddent mobilization of sediment on the shelf margin by the sediment surface over-steepening on the sea floor and sudden movement downslope triggered potentially by too much sediment, storms and/or earthquakes. Sedimentary Processes and Structures. Of the variety of transport mechanisms discussed, sedimentologic evidence from the Trenton Limestone suggests that a variety of storm-influenced, gravity influenced, and suspension settling transport mechanisms were active in the accumulation of these carbonates. 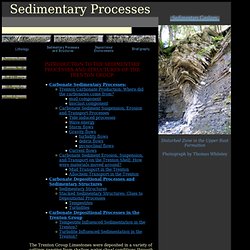 >>Back to Top Mud Transport in the Trenton: According to studies by Titus (1974) and Mehrtens (1988, 1992), aside from purely micritic beds with nearly 100% micritic mud, nearly all coarser-grained limestone beds in the Trenton are composed of between 10 and 50% micritic mud. Some of this micritic mud was potentially produced in the shallowest settings locally on the Trenton Shelf, but it is unlikely that the entire micritic mud budget is locally derived. Pelletal and flocculated muds were both transported as components of down-slope transport processes, either storm-generated or gravity generated, as well as through suspension settling processes as evidence by beds deposited during background sedimentation.

OzCoasts Conceptual model: Aquatic sediments (changed from natural) model. Our current best conceptual understanding of the stressor 'aquatic sediments' is shown in Figure 1. Figure 1. Potential causes of a change to aquatic sediments and the condition responses observed as a result of this change. The introduction of both fine and coarse sediments into aquatic systems is an important natural process and is integral to the natural functioning of these systems. However, human induced increases in the natural loads of sediments, and most particularly fine sediments (<63 µm) entering systems can have a number of undesirable impacts.

Within an estuary, fine sediments can remain in suspension, they may be deposited in low energy areas such as mangroves, forming muddy deposits, or are transported out of the estuary via tidal currents and are deposited in nearshore coastal areas. More information on this stressor. Course: Geology AS 2: Rocks. Geology Cafe.com. Essential concepts of chemistry related to earth materials Basic concepts of chemistry are essential to understanding the physical and chemical properties of earth materials (minerals, rocks, organic matter, etc.). The chemical characteristics of earth materials are reflect the environments how and where they are formed, they also determine their potential fate when exposed to chemical changes. For instance, rocks and minerals formed deep underground may not be stable in the surface environment where they are exposed to water, air, temperature changes, and other physical and chemical conditions.

All matter is made up of atoms, and atoms are made up of atomic particles (electrons, protons, and neutrons - see Figure 2-5). A chemical element is a pure chemical substance consisting of one type of atom distinguished by its atomic number, which is the number of protons in its nucleus. Many elements have one or more isotopes. Rocks 2.5. Classification of Metamorphic Rocks (Part 4) Composition • Common minerals in metamorphic rocks include quartz, feldspar, mica, calcite, and hornblende. • Index minerals in metamorphic rocks indicate how much the original rock was metamorphosed, called the grade of metamorphism.

Index Minerals minerals include chlorite, epidote, garnet, staurolite, kyanite and sillimanite. Fine-grained crystals of chlorite (not visible) give this slate its green color. Slate (Photograph by Parvinder Sethi) The Rock Cycle. There are three kinds of rocks; each is formed a different way. Igneous rock forms from magma. Igneous means "from fire. " Geology - rocks and minerals. Introduction.