XPM Trading. BTC-E. Vircurex. Coins-E Trade. Cryptsy. Bter.com. Crypto Trade. PrimeCoin Exchange. XPM Mining. Useful Mining Documents. Primecoin Mining Hardware Comparison. Hardware Comparison. Idiots Guide XPM mining on Digital Ocean. This guide will explain to you step by step how to quickly set up several miners without having to make them one by one and do it with almost no typing. As well as setting it up so that even if the server resets your miner will keep on mining. First set up and account and billing information on digital ocean.

Important- If you are feeling nice you can use my referral code 7ea6639b1f9b so I can get some credit on my account. Then once that is set up go to create droplet 1. Give it a hostname e.g Myfirstminer12. Now your droplet is read to be accessed and you will have received an email with the access details. You will then enter into the command line of your program and then you copy and paste the following commands in one by one. Important - When you input the install supervisor you will be prompted by the terminal to answer a question y/n just type y and press the enter button.Important - There will be a long wait after you input the makefile.unix command.

DigitalOcean Hosting. XRam Pool. Y Pool. [XPM] A real-life comparison between ypool.net and beeeeer.org mining pools. I currently have access to 1920 cores in the cloud (don't ask - don't tell), and Primecoin (XPM) has caught mine and everybody else's attention recently. 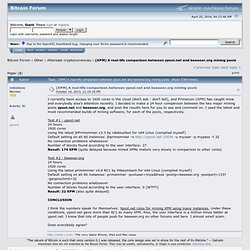 I decided to make a 24 hour comparison between the two major mining pools ypool.net and beeeeer.org, and post the results here for you to see and comment on. I used the latest and most recommended builds of mining software, for each of the pools, respectively. Test #1 - ypool.net 24 hours1920 coresUsing the latest jhPrimeminer v3.3 by rdebourbon for x64 Linux (compiled myself)Default setting on all 60 instances: jhprimeminer -o -u myuser -p mypass -t 32No connection problems whatsoeverNumber of blocks found according to the user interface: 27Result: 174 XPM (quite delayed because mined XPMs mature very slowly in comparison to other coins) I think the numbers speak for themselves: Ypool.net rules for mining XPM using many instances.

Under these conditions, ypool.net gave more than 8(!) Does everybody agree? Y Pool Client - Jhprimeminer. JhPrimeMiner is a miner that was designed for use with the pool, the very first primecoin pool for miners. 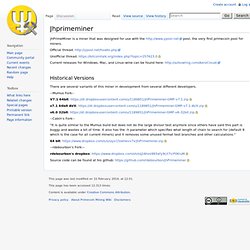 Official thread: Unofficial thread: Current releases for Windows, Mac, and Linux-wine can be found here: There are several variants of this miner in development from several different developers. --Mumus Fork-- V7.1 64bit: v7.1 64bit AVX: v6.0 32bit: --Cabin's Fork-- "It is quite similar to the Mumus build but does not do the large divisor test anymore since others have said this part is buggy and wastes a bit of time. 64 bit: --rdebourbon's Fork:-- rdebourbon's dropbox: Source code can be found at his github: 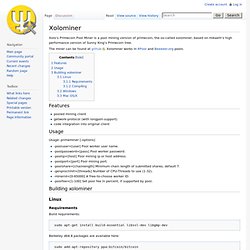