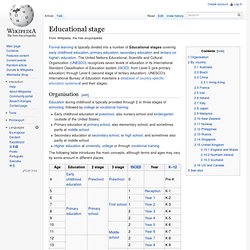 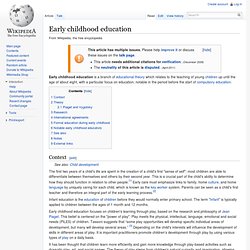 Context[edit] The first two years of a child's life are spent in the creation of a child's first "sense of self"; most children are able to differentiate between themselves and others by their second year. This is a crucial part of the child's ability to determine how they should function in relation to other people.[1] Early care must emphasize links to family, home culture, and home language by uniquely caring for each child, which is known as the key worker system.

Parents can be seen as a child's first teacher and therefore an integral part of the early learning process.[2] Preschool education. A preschool (also nursery school, kindergarten outside USA) is a educational establishment offering early childhood education to children between the ages of three and five, or seven, prior to the commencement of compulsory education at primary school. 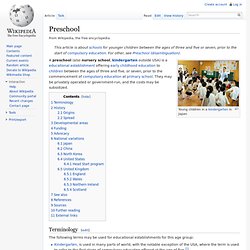 They may be privately operated or government-run, and the costs may be subsidized. Terminology[edit] The following terms may be used for educational establishments for this age group: Kindergarten, is used in many parts of world, with the notable exception of the USA, where the term is used to refer to the first stage of compulsory education offered at the age of five.[1]Pre-K (or Pre-Kindergarten) is an initiative to improve access to preschool for disadvantaged children in the USA.Nursery School (UK and also USA)Grade 0, which is also sometimes classified as "a mixture between preschool and a school regime'.[2][3]Pre-Primary[4]

Kindergarten. A Kindergarten in Japan, On Japanese Parent's day, October 2009 First day of Iranian new education year,for Kindergarten students and elementary school newcomers, in Nishapur A kindergarten (German Kindergarten , literally children's garden) is a preschool educational approach traditionally based around playing, singing, practical activities such as drawing, and social interaction as part of the transition from home to school. 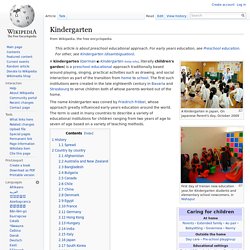 The first such institutions were created in the late eighteenth century in Bavaria and Strasbourg to serve children both of whose parents worked out of the home. The name kindergarten was coined by Friedrich Fröbel, whose approach greatly influenced early-years education around the world. History[edit] Samuel Wilderspin opened his first infant school in London in 1819,[7] and went on to establish hundreds more. Spread[edit] Women trained by Fröbel opened Kindergartens throughout Europe and around the World. Primary education. Children and teacher in a primary school classroom in Laos An elementary school in California, United States Primary education or elementary education often in primary school or elementary school is typically the first stage of compulsory education, coming between early childhood education and secondary education. 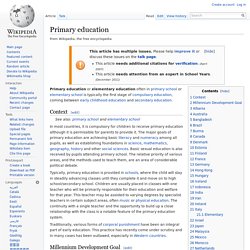 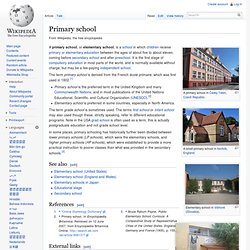 It is the first stage of compulsory education in most parts of the world, and is normally available without charge, but may be a fee-paying independent school. The term primary school is derived from the French école primaire, which was first used in 1802.[1] Primary school is the preferred term in the United Kingdom and many Commonwealth Nations, and in most publications of the United Nations Educational, Scientific, and Cultural Organization (UNESCO).[2]Elementary school is preferred in some countries, especially in North America. The term grade school is sometimes used. The terms first school or infant school may also used though these, strictly speaking, refer to different educational programs. Middle school. A middle school or junior high school is a school which children attend between primary school and secondary school in places which use three levels of schooling, typically between the ages of about 10–11 and 14–15 although this varies. 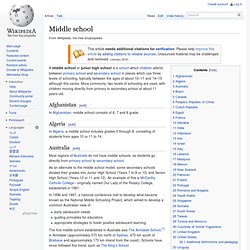 More commonly, two levels of schooling are used, with children moving directly from primary to secondary school at about 11 years old. Afghanistan[edit] In Afghanistan, middle school consists of 6, 7 and 8 grade. Algeria[edit] In Algeria, a middle school includes grades 5 through 8, consisting of students from ages 10 or 11 to 14. Australia[edit] Most regions of Australia do not have middle schools, as students go directly from primary school to secondary school. As an alternate to the middle school model, some secondary schools divided their grades into Junior High School (Years 7 to 9 or 10) and Senior High School (Years 10 or 11 and 12). Early adolescent needsguiding principles for educatorsappropriate strategies to foster positive adolescent learning. 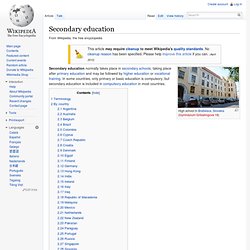 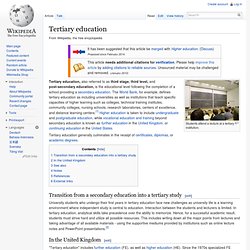 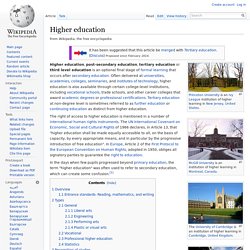 Often delivered at universities, academies, colleges, seminaries, and institutes of technology, higher education is also available through certain college-level institutions, including vocational schools, trade schools, and other career colleges that award academic degrees or professional certifications. Tertiary education at non-degree level is sometimes referred to as further education or continuing education as distinct from higher education.

In some programs in the traditional German system and the traditional Dutch system, there is no legal distinction between "undergraduate" and "postgraduate". In such programs, all education aims towards the Master's degree, whether introductory (Bachelor's level) or advanced (Master's level). Types of postgraduate qualification[edit] Vocational education. Vocational education (education based on occupation or employment), also known as career and technical education (CTE) or technical and vocational education and training (TVET) is education that prepares people for specific trades, crafts and careers at various levels from a trade, a craft, technician, or a professional position in engineering, accountancy, nursing, medicine, architecture, pharmacy, law etc. Craft vocations are usually based on manual or practical activities, traditionally non-academic, related to a specific trade, occupation, or vocation.

It is sometimes referred to as technical education as the trainee directly develops expertise in a particular group of techniques. Vocational education is related to the age-old apprenticeship system of learning. Apprenticeships are designed for many levels of work from manual trades to high knowledge work. VET internationally[edit] Further education. Further education (often abbreviated FE) in the United Kingdom and Ireland, not dissimilar to continuing education in the United States, is a term used to refer to post-compulsory education (in addition to that received at secondary school), that is distinct from the higher education offered in universities.

It may be at any level above compulsory secondary education, from basic skills training to higher vocational qualifications such as PGCE, NVQ, City and Guilds, BTEC, HNC, HND or Foundation Degree. A distinction is usually made between FE and higher education HE, an education at a higher level than secondary school, usually provided in distinct institutions such as universities. FE in the United Kingdom is usually a means to attain an intermediate or follow up qualification necessary to attend university, or begin a specific career path, e.g.