Agents of Imagination by Carol Jago. Poetry lessons too often progress something like this: a teacher reads aloud with feeling a poem she loves. 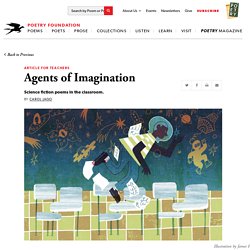 Because she is a good teacher, she doesn’t immediately start peppering students with questions about imagery and diction but instead gently queries, “So what do you think?” Silence. Not a raised hand in sight. But English teachers hate silence, so she starts talking, telling students about the poet’s life and influences, pointing out where the poem turns, explaining every allusion. In no time, the bell rings. What pains me about this scenario, which I have enacted more times than I care to admit, is that students leave class thinking, “Mrs.

In the introduction to his book Beautiful & Pointless: A Guide to Modern Poetry (2011), poet and critic David Orr suggests that our whole approach to teaching poetry needs rethinking: For example, I have read Joy Harjo’s poem “She Had Some Horses” many times, and for the record, I have never understood it. Lesson of the Day: Amanda Gorman and ‘The Hill We Climb’ As its name suggests, occasional poetry documents and reflects upon particular occasions, events both public and private, grand and less grand, from Tennyson’s “The Charge of the Light Brigade” to Frank O’Hara’s “The Day Lady Died” on the death of Billie Holiday. 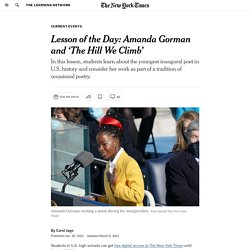 Often occasional poems are commissioned and intended for a public reading. Through the ages, kings and queens have summoned poets to celebrate their triumphs. Since John F. Kennedy, most incoming Democratic presidents have invited poets to mark their accession to the highest office in the land. While presidents have typically taken a hands-off approach to the poem’s composition, President Kennedy asked Robert Frost specifically to read “The Gift Outright” at his inauguration and suggested a revision to the last line. In 2013, President Barack Obama asked Richard Blanco to be his inaugural poet. Fortunately, writing occasional poems is nothing new for Ms. Ms. Nikki Giovanni. Fatimah Asghar. Claudia Rankine. Margaret Atwood - Sherman Alexie. The Audre Lorde Project. Photo by Elsa Dorfman The Black feminist, lesbian, poet, mother, warrior Audre Lorde (1934-1992) was a native New Yorker and daughter of immigrants. 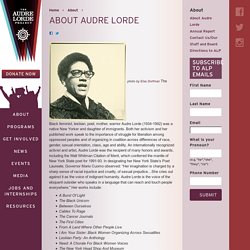 Both her activism and her published work speak to the importance of struggle for liberation among oppressed peoples and of organizing in coalition across differences of race, gender, sexual orientation, class, age and ability. An internationally recognized activist and artist, Audre Lorde was the recipient of many honors and awards, including the Walt Whitman Citation of Merit, which conferred the mantle of New York State poet for 1991-93. In designating her New York State’s Poet Laureate, Governor Mario Cuomo observed: “Her imagination is charged by a sharp sense of racial injustice and cruelty, of sexual prejudice…She cries out against it as the voice of indignant humanity.

Home - Rupi Kaur. Bell hooks Institute. Poetry Out Loud. My poetic side - Post your poetry! All Poetry - The world's largest poetry site : All Poetry. The Watering Hole – Building Harlem Renaissance Spaces in the Contemporary South. Voices of Our Nations Arts Foundation – Nurturing Writers of Colors Since 1999. Poetry Coalition. The Poetry Coalition is a national alliance of more than 25 organizations dedicated to working together to promote the value poets bring to our culture and the important contribution poetry makes in the lives of people of all ages and backgrounds. 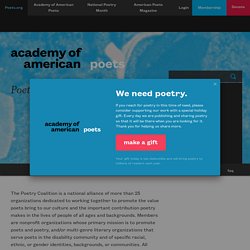 Members are nonprofit organizations whose primary mission is to promote poets and poetry, and/or multi-genre literary organizations that serve poets in the disability community and of specific racial, ethnic, or gender identities, backgrounds, or communities. All members present poets at live events. (Founding members are denoted with an asterisk.) Letras Latinas Blog. Mission & History. Who We Are For over 30 years, Lambda Literary has championed LGBTQ books and authors. 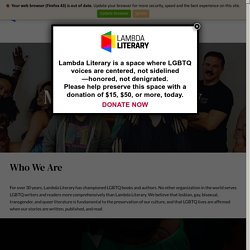 No other organization in the world serves LGBTQ writers and readers more comprehensively than Lambda Literary. Kundiman. Hurston/Wright Foundation. Cave Canem. About Us - Button Poetry. Mission Button Poetry is committed to developing a coherent and effective system of production, distribution, promotion and fundraising for performance poetry.

Vision We seek to showcase the power and diversity of voices in our community. By encouraging and broadcasting the best and brightest performance poets of today, we hope to broaden poetry’s audience, to expand its reach and develop a greater level of cultural appreciation for the art form. What we actually do. Split This Rock.